Standard Disclaimer: This page is a listing and links to news items regarding transgender persons from 1970. It is ordered by date of appearance in the news, not the date of the event. Note that the text summaries are not transcripts.

April Ashley is featured in a small photo blurb, on the issue of her losing her case in divorce court in England. 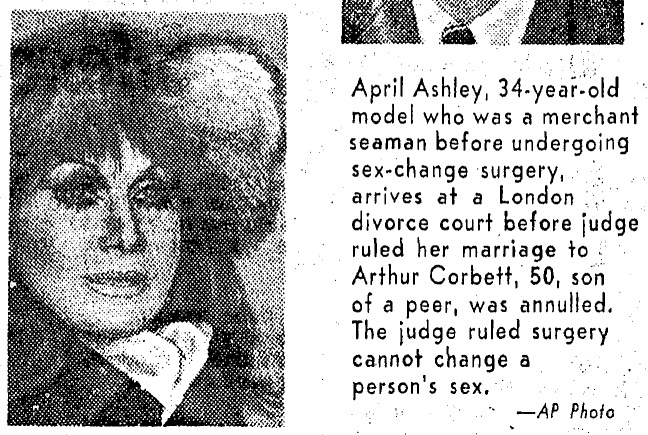 Meanwhile, the Portland Oregonian has a slightly longer blurb with photograph. What is not known at this time are the repercussions of Ashley’s self-serving fight against her divorce (her own autobiography casts a damning light on her motivations). As a result of her court action and appeals, the UK would declare that transsexuals could not change their sex for the purpose of marriage, a ruling which set back transgender rights for decades, until the Gender Recognition Act of 2004.

Austrian skier Erika Schinegger has changed her sex to become Erik Schinegger, and took 14th place at a recent event in Italy.

A short blurb states that April Ashley is being considered for the part of Eva Peron in a theatre production. I cannot find in any news after this if she did in fact take the role.

A very dark and impossible to see photograph of April Ashley at her London restaurant is published, along with a tiny blurb. This article is of no real interest, but is included for completeness.

April Ashley notes that she will appeal her loss in court regarding her divorce. See February 3 of this year for more information.

A Hollywood report mentions the film Myra Breckenridge only briefly, then talks in much more depth about a screening of “The Christine Jorgensen Story,” generally in a positive light.

A film gossip column dishes out some dirt on the cast of Myra Breckenridge, telling stories of backbiting, infighting, snarking behind each others backs.

A review of Myra Breckenridge gives it a rating of “SA” – for “Stay Away.”

Christine Jorgensen, in an unfortunate interview, states that she’s ambivalent on the subject of women’s liberation, largely because she’s never felt oppressed.

Ann Landers, frequent disapprover of transgender persons, advises the mother of a transgender boy that her “daughter” is trying to self-mutilate and should be dissuaded from transition.

A review of the film “The Christine Jorgensen Story” gives it a lukewarm review, noting that the story is alright but the acting is terrible.

An interview with Christine Jorgensen on the occasion of her biographical film being premiered is somewhat interesting. Again, she is asked about women’s liberation, which was actually not an odd thing for her to be asked about in the year 1970.

Two brothers in Minneapolis-St. Paul have transitioned together to become sisters, Lauraine and Lenette Lee. I have a little more information on them on this page.

An interview with Christine Jorgensen reveals that she is pleased by the portrayal of her on the silver screen.

In yet another telling of her interview, Christine Jorgensen tells that she approves of her biography, and disapproves of Myra Breckenridge.

A review of the Christine Jorgensen biographical film indicates that the reviewer found it unremarkable, and the lead actor John Hansen much too masculine to portray Jorgensen.

A photograph of actor John Hansen as both the pre-transition and post-transition Christine Jorgensen is published. 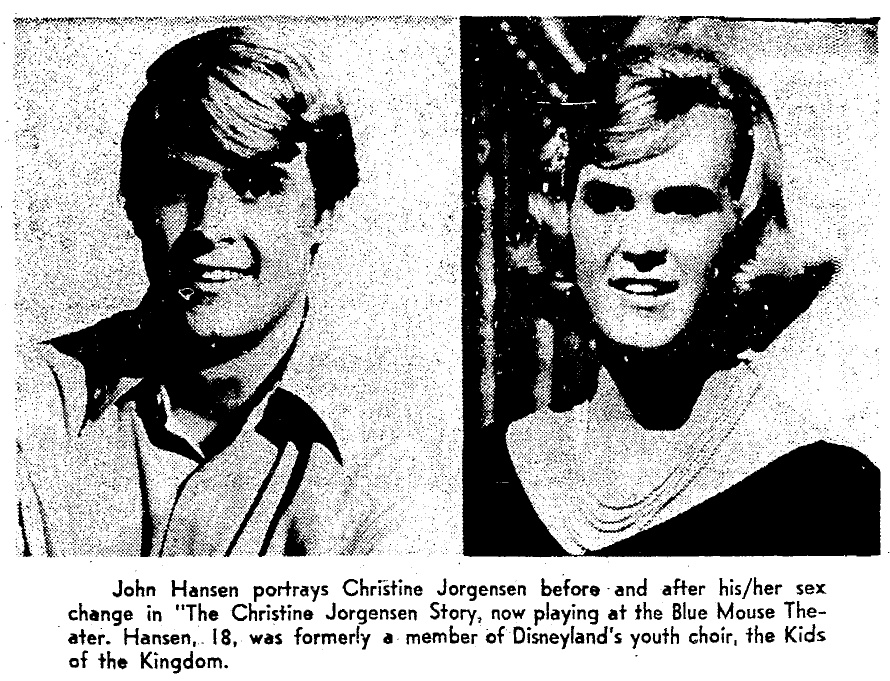 An article which interviews Dr. Lawrence E. Newman reveals that the physician believes firmly that gender transition has the best results when it is performed during youth.

A comprehensive article in the Aberdeen South Dakota Daily News covers the gender transition of siblings Lenette and Lauraine Lee, brothers who transitioned to female. Notable in the article is the fact that both siblings suffered terribly from their surgeries, with Lauraine reportedly requiring 8 additional surgeries to correct problems after SRS.

For some reason Christine Jorgensen is featured in an article where her fishing trip, her film, and her views on pollution and population control are explored.

A brief mention is made that Christine Jorgensen has flown to London to be present at the opening of her biographical film. She also comments on how she almost was married twice, but gave up.

An article mentions that Christine Jorgensen is becoming the talk of the town over her new biographical film. She is noted as loving to play tennis at the courts near her Hollywood apartment. It’s also noted that she is expected to receive $100,000 or more from her film.

Deborah Hartin, a 37-year-old Navy veteran who underwent SRS on April 16, is seeking a divorce from her wife who abandoned her a decade before. The judge in the case commented “So now your child has two mothers.”

Deborah Hartin (see October 7) has had her divorce granted by a judge. However, custody of her 15-year-old daughter was granted to her wife, and the judge noted that Hartin’s name change was granted “in the interest of your child.” 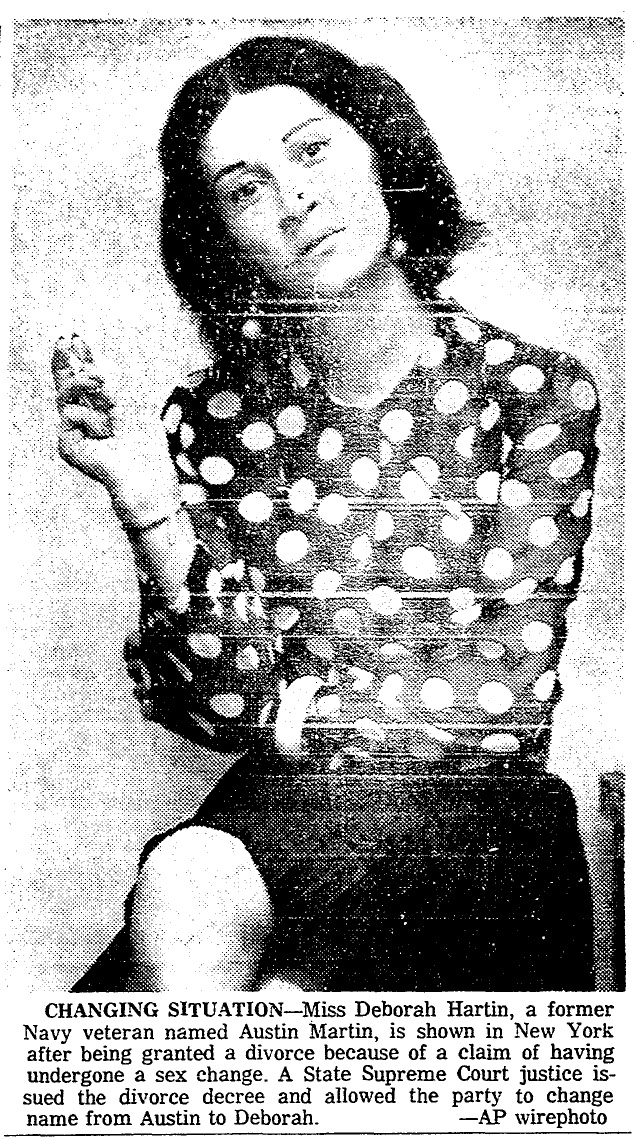 Vice President Spiro Agnew kicks off a mini-controversy when he referred to Charles E. Goodell as “truly the Christine Jorgensen of the Republican Party.” The background to this was criticism by the more liberal Goodell towards the Nixon Administration and President Nixon himself, to large extent over the conduct of the Vietnam War. On my Christine Jorgensen page I have a photograph of Ms. Jorgensen reacting to the derogatory use of her name.

Christine Jorgensen has sent a telegram to Vice President Spiro Agnew, demanding an apology for the derogatory use of her name. Agnew has reportedly not replied.

Both the Dallas Morning News and the Trenton New Jersey Times report that Vice President Spiro Agnew will give no apology to Christine Jorgensen for his derogatory use of her name when describing liberal Republican Charles Goodell. Said Agnew, “Christine Jorgensen is in the public domain mostly because she has elected to place herself in it, even to the extent of making a motion picture.” And one must note, at least Agnew didn’t misgender her.

Convicted murderer Thomas Preston Lamb, an inmate serving three consecutive life sentences for a brutal murder and kidnapping, went to court in Olathe, Kansas, to try to get his sentence modified so he could obtain psychiatric treatment, receive SRS, and serve time in a women’s prison. His motion was denied. (Note I have referred to Lamb in the masculine tense because there is serious question as to the sincerity of his claims.)

Dorian Bernard (female name not given) is featured in a short blurb shown below. 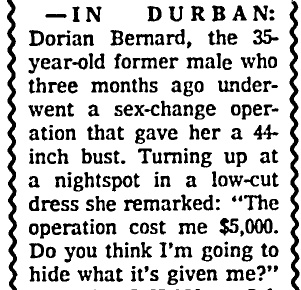 “Verissa,” featured as “the most beautiful woman created by medical science sex change[sic],” will be appearing at the Magic Inn. 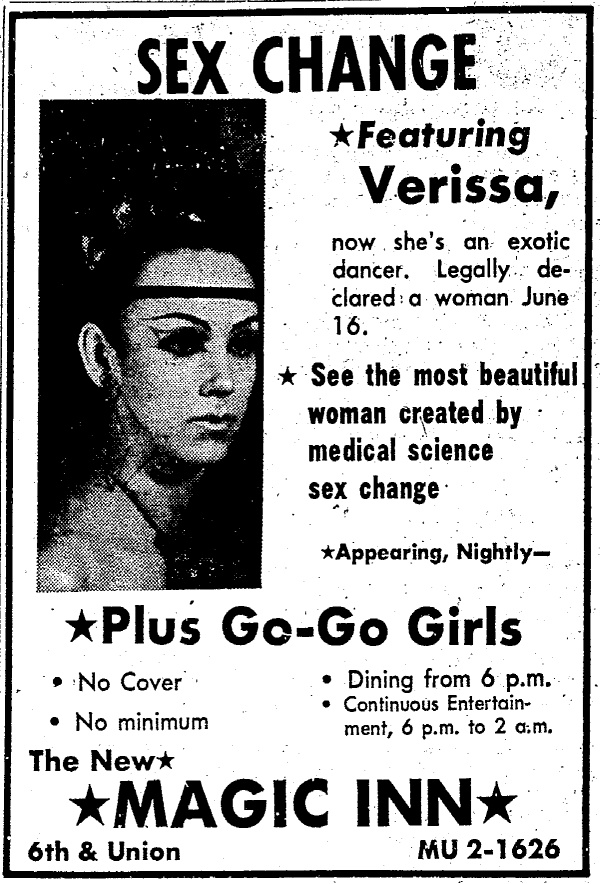 A report from England notes that British taxpayers are paying $2,400 for every person who wants a “sex change.” The number is of course too large, as will be corrected the following day.

In a correction to the prior days’ article, it is noted that the average cost for a “sex change” operation in England is only $720, a price which even when inflation is taken into consideration is quite cheap. At least 45 persons have benefited from the National Health Service plan, and many more are on the waiting list.