I used to start this page with the text “little is known about Tamara Rees outside of her incredibly difficult-to-find autobiography, Reborn.” That has changed due to extensive research which I performed as part of the Transgender Newsbank, as well as thanks to the wonderful assistance of a librarian at the Mayo Clinic Library in Rochester, Minnesota.

Tamara Rees announced shortly after her unveiling to the world that she would be writing her autobiography, possibly with the intent of having a film made of it. And her autobiography, published in 1955, is one of the first such ever written by a medically transitioned transsexual woman (with the exception of that of Lili Elbe and possibly a couple of other lost works). Unfortunately, it also quickly vanished into obscurity. It was published by a small, private publishing house, sold for $1 a copy, and essentially vanished from history. Until early 2015, I only knew of two persons who had ever seen a copy of the work, and could locate none. (Searching was made slightly more difficult by the alternate spelling of her surname as “Reese”.)

That was until a chance search at my university uncovered the fact that the Mayo Clinic possessed a copy within their History of Medicine Collection. This specific copy of the book was formerly owned by Dr. Walter C. Alvarez (1884-1978). Dr. Alzarez was a physician at the Mayo Clinic who specialized in gastroenterology, and he had an interest in books dealing with little-understood challenges, i.e. depression and addiction, to name a few. I contacted the Mayo Clinic Libraries and confirmed that the book still existed, and had passed into the public domain:

I discussed my intention to make this incredibly rare work available – the autobiography of the third “Atomic Age” American transsexual woman – and the library informed me that they wholeheartedly supported the goal of preserving transgender history, and agreed to copy the entire work and send it to me.

And thus, exclusive to Transas City, I present to you this autobiography, which can be cited as: Reese, Tamara. Reborn Los Angeles: Irene Lipman, 1955. Please download this, copy it, distribute it, and help make certain that this piece of transgender history is never lost again! 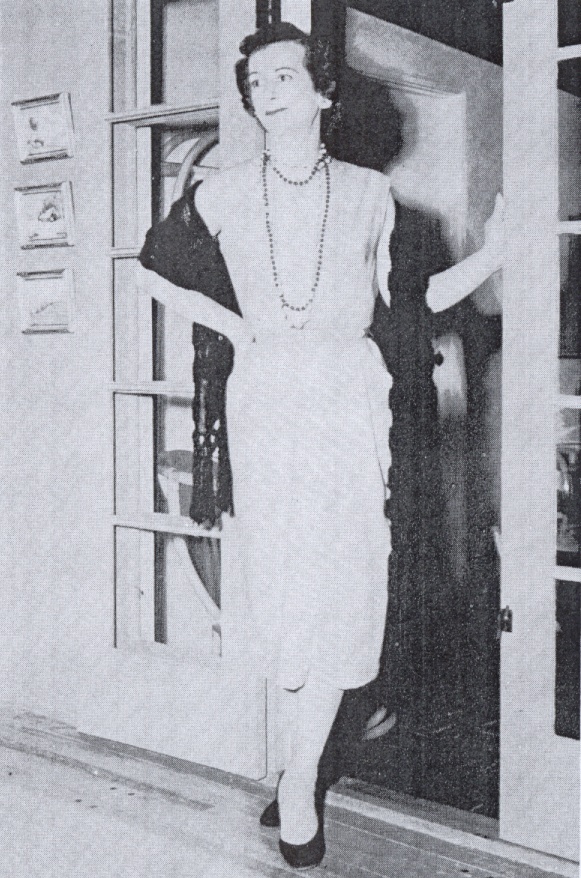 Now for the bad news – her autobiography is relatively short, being barely over 50 pages, and only contains 2 poor-quality photographs. The work starts out intriguingly with the information that she was born in Kansas City – I confess to getting goosebumps when I read that! – and lived in Wichita for a while. The book tells of a youth filled with gender dysphoria and failure, as well as several attempts to escape into some service or corps (she spent time with both the Navy and the Army), and finally takes her to WWII and her service as a paratrooper in the conflict. From there we learn of her being wounded in action, her stunt-diving and airplane-flying career, her marriage of convenience, and again a directionless life. The details of her actual medical transition, both the procedures and the processes, is very sparse. Her tales of being mobbed by the press and learning how to act and live as a woman in public are somewhat interesting, and some light is finally cast on her suicide attempt (she claims it wasn’t, however) which led to her suddenly being evicted from the Netherlands.

In short, I was a bit let down by the work. I felt like there was so much else which could have been written, so many details which were missing, and so much opportunity lost to preserve more of our early history. However…the work is what it is, and as such it nonetheless provides an enormous amount of information about Rees which was unknown by myself, and I’ll wager by even most transgender researchers. Especially interesting are some notes by the book’s prior owner, Dr. Alvarez, which explain that he knew Reese personally, and that she had married and adopted a daughter – the latter fact being something I never knew. But still, I wanted to know so much more…and the search for more information will continue, as always.

I purchased two original archival photographs of Rees, which I am sharing here. This first photograph is from November 22, 1954, and shows a side-by-side view of the “old” and the “new” Rees. If you want a high-resolution version of this image, please click here. 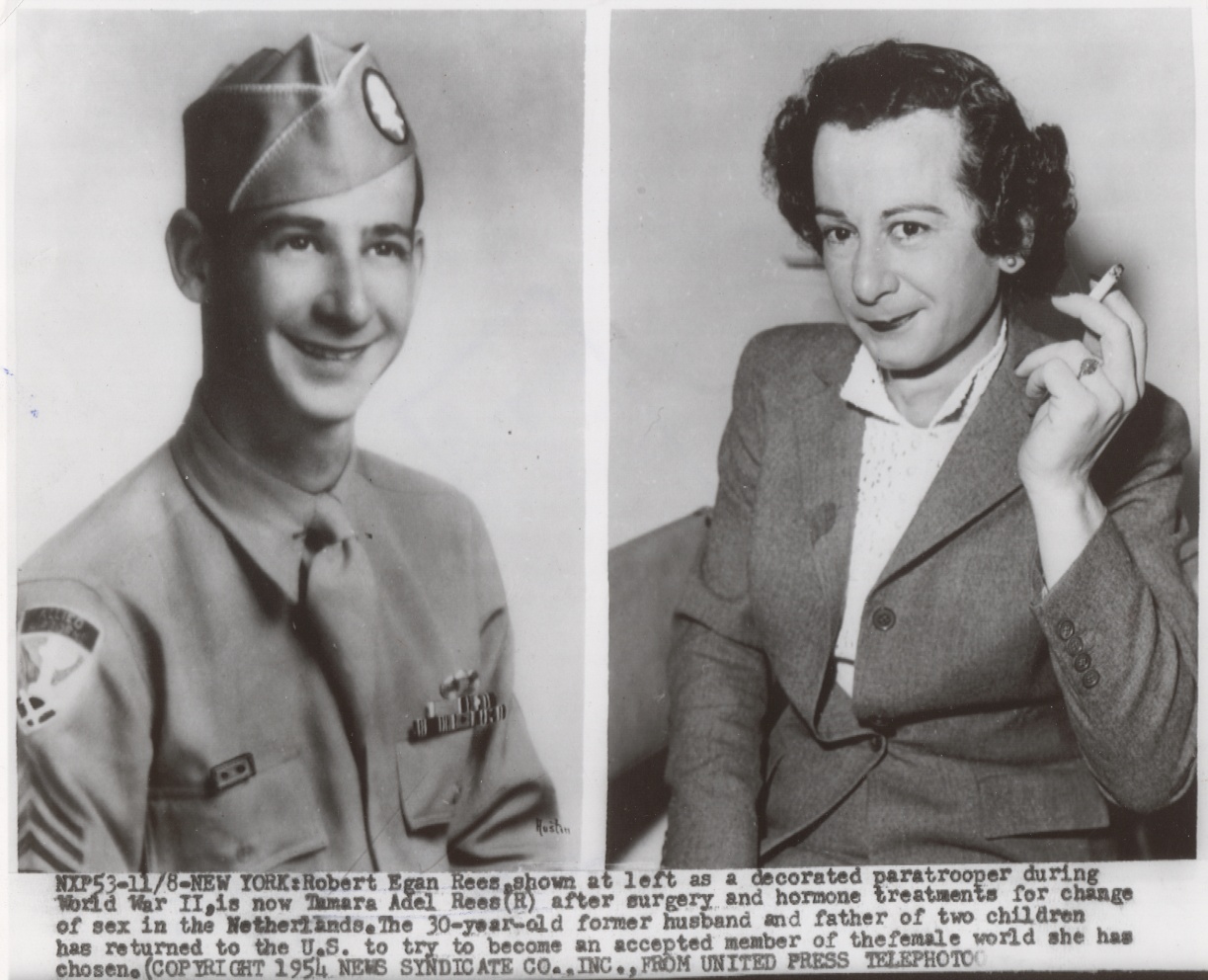 This next photograph from July 28, 1955, portrays Rees in a pose which is cynically stereotypical of emphasizing femininity – running a Eureka vacuum cleaning in a dress and heels. If you want a high-resolution version of this image, please click here. 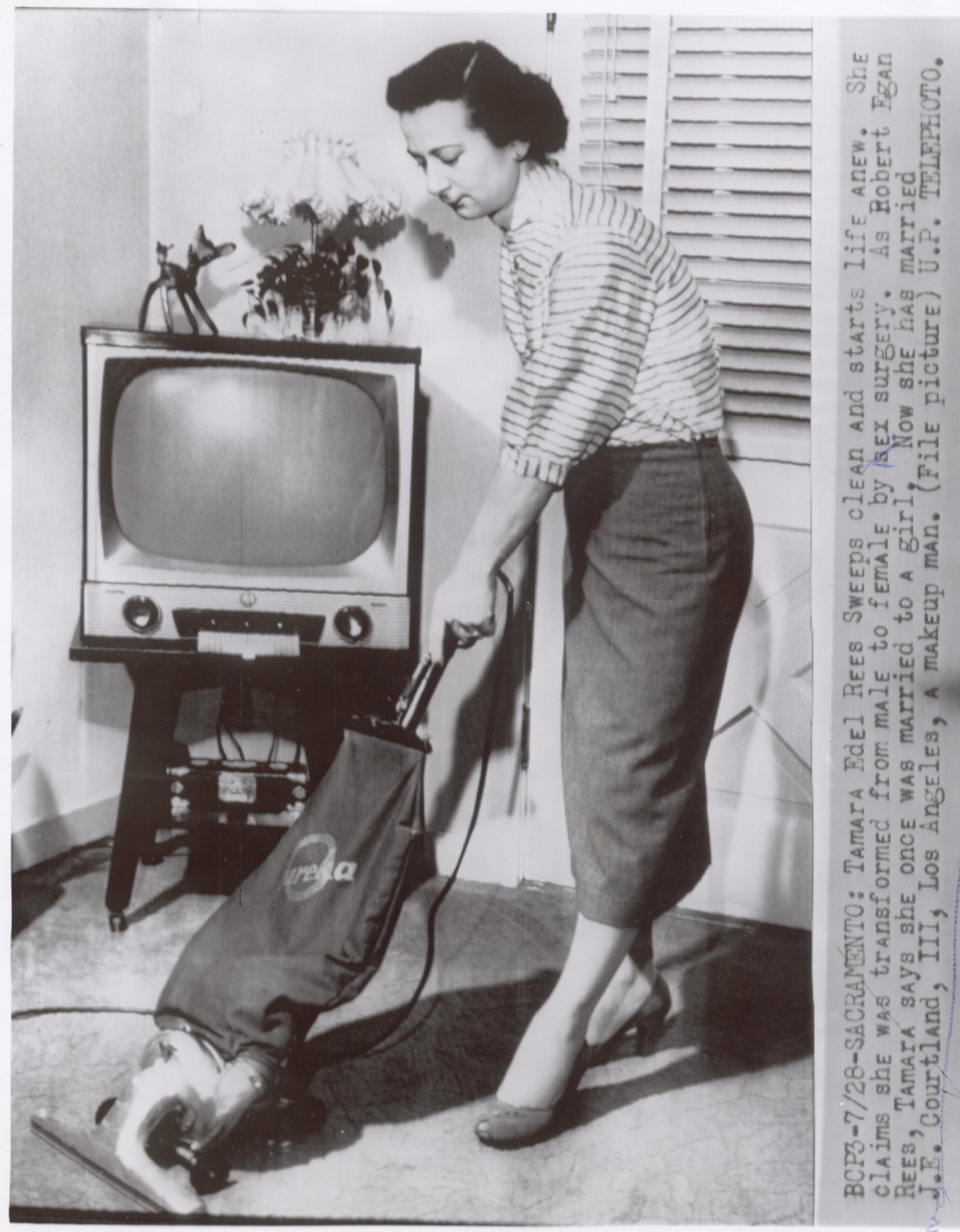 This photograph is not high quality, but it’s still interesting because of the caption. It claims to be from July 29, 1955, and says the following: “Will Lecture – Tamara Rees, paratrooper turned ‘woman’ by sex surgery, poses on the stage of a burlesque theater in Los Angeles with her new husband, J.E. Courtland, III. Couple will lecture on ‘straight psychology.’ – From Breckenridge American (Breckenridge, Tex.), July 29, 1955.” 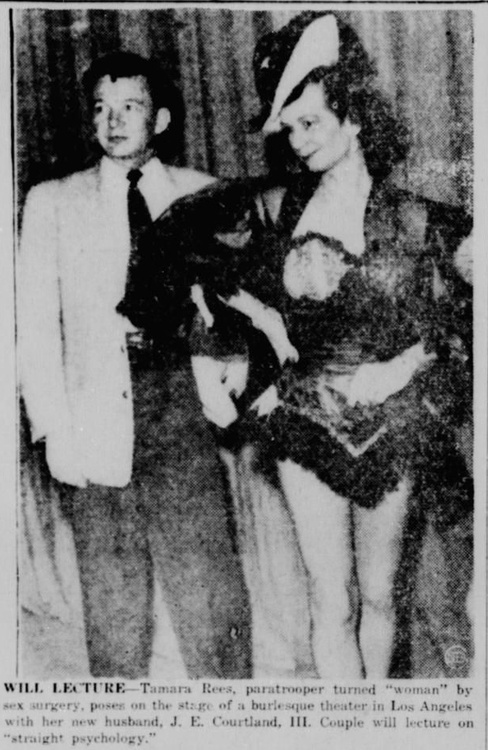 Here is a photograph I came across by chance on the net. It’s from Jet Magazine, 10 November, 1955. 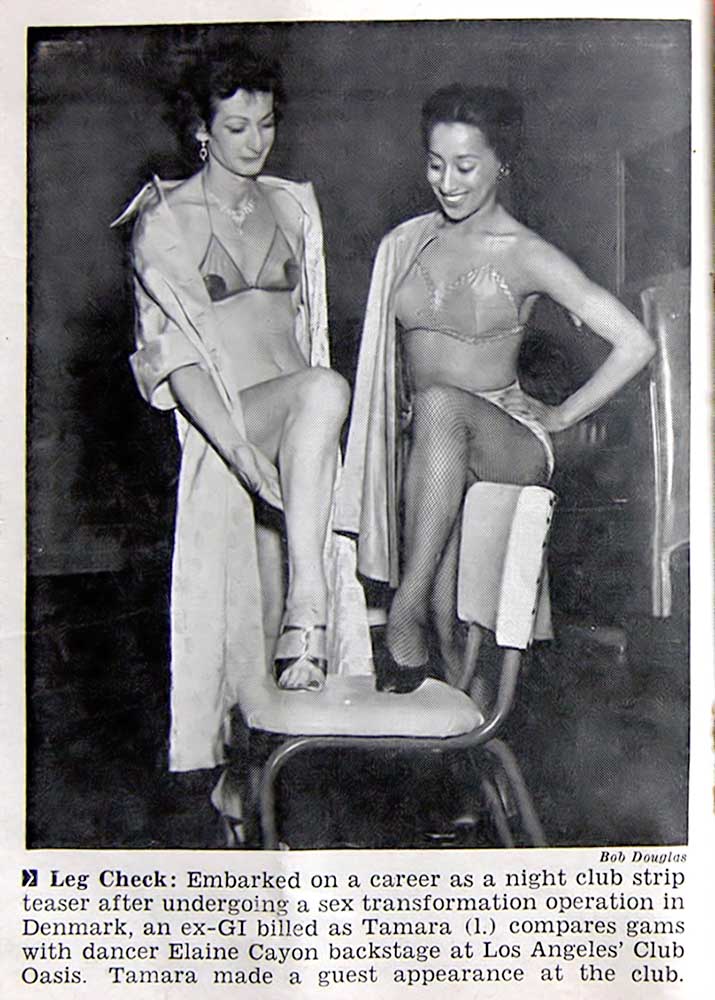