Standard Disclaimer: This page is a listing and links to news items regarding transgender persons from 1976. It is ordered by date of appearance in the news, not the date of the event. Note that the text summaries are not transcripts.

A simple, small news article has a hidden story behind it. In that the newlywed woman who was murdered is Terri Williams Moore, a transsexual woman. You can read much more about the murder at this link.

Transsexual woman Jackie Graham, sometimes known as Jackie Collins, was convicted of second degree murder resulting from an argument where the victim had pulled off her wig.

In what will be the start of a new phase of transsexual history, an article in the San Diego Union mentions that there is some controversy over the sex of the winner of the women’s singles competition in the La Jolla Tennis Tournament. One item which seems suspicious right from the start is that Dr. Renee Richards entered the tournament under a false name, Renee Clark. The rumors are that she is really Dr. Richard Raskind, which of course…she was. She also claims to be 31 years of age, when in reality she is 41 years.

The pressure increases in the case of Renee Richards, as the director of the La Jolla Tennis Tournament says they will refer the question of Ms. Richards gender to a sanctioning board. Ms. Richards, for her part, claims “I am indeed a woman and you can check with my gynecologist to verify it.”

Finally, the identity of Renee Richards as a transsexual woman – formerly Dr. Richard Raskind – has been confirmed. Click here for Page 1 and here for Page 2 of the article.

Robin Harris, the woman defeated in the final of the La Jolla Tennis Tournament by Renee Richards, claims she will not initiate a formal complaint against Renee Richards for playing as a female contestant.

Renee Richards, described as an “ex-male,” is reported as wanting to play in the US Women’s Open at Forest Hills, New York, next month. She says that she will seek her right to play by any means necessary, and as history shows, she was successful.

A very large and well-written article on transsexual men and women appears over three pages in the Cleveland Plain Dealer on this date. Featured in the article are Canary Conn (possibly the inspiration for the article), Jude Patton, Sid Wendy Hall, Carol Katz, Renee Richards, and Betty Sue Walker – many who tell their individual personal tales. Part 1 of the article, part 2, and part 3 can all be accessed by these links. In addition, similar versions of this same article appear in the October 14, 1976 Baton Rouge State Times Advocate (page 18D) and the October 17, 1976 New Orleans Times-Picayune, page 3-8. However, those articles are edited versions of the one appearing in the Cleveland Plain Dealer. I have taken two detail photographs from the Baton Rouge and New Orleans papers, as they copied better than the ones in the Plain Dealer. 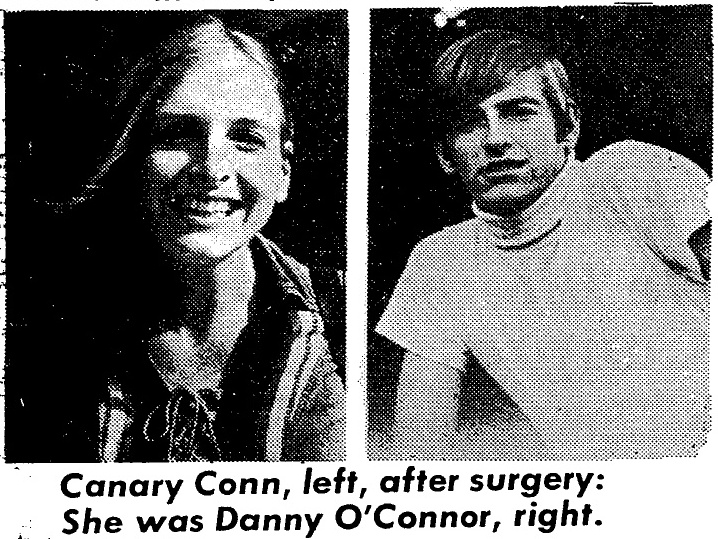 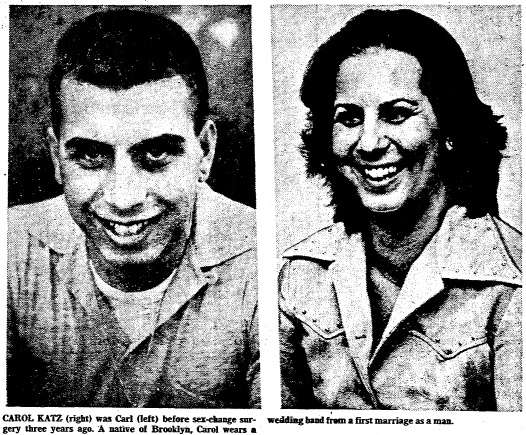 Barbara Raskind, the wife of transsexual woman Renée Richards, is reported as asking for $7,000 in alimony in divorce court.