Standard Disclaimer: This page is a listing and links to news items regarding transgender persons from 1969. It is ordered by date of appearance in the news, not the date of the event. Note that the text summaries are not transcripts.

Five specialists at the University of Washington, Seattle, have pooled their talents to perform sexual reassignment surgeries for transsexuals and intersex persons. The team includes a plastic surgeon, psychiatrist, psychologist, urologist, and gynecologist.

A short picture article shows Franca Vettori, age 36, who just won recognition of her new gender in a Pisa, Italy court after having her sexual reassignment surgery in Casablanca, Morocco.

An article tells of the pending marriage of transsexual woman Dawn Pepita Hall (formerly Gordon Langley Hall) to her butler, John Paul Simmons. A second article published on that day tells of the new gender identity clinic in Seattle, which is a similar article to that in the Trenton Sunday Times Advertiser on the 5th of January.

Four articles tell of the marriage of transsexual woman Dawn Pepita Hall (formerly Gordon Langley Hall) to her butler (sometimes called her chauffeur), John Paul Simmons. The first article focuses on Ms. Hall’s desire to have 3 children (something which would come back to haunt her later). The second has little additional information, but the third has a somewhat poor wedding photograph (I have a much better one at this link here.) The fourth article is notable only because it mentions the bride’s train was 12 feet long.

An interview with actress Elizabeth Taylor mentions that she is under consideration for the title role in the upcoming film Myra Breckenridge, and discusses whether she could play the role of a “man.”

A report from Johns Hopkins hospital says that 20 sexual reassignment surgeries have been performed, 15 on transwomen and 5 on transmen. The center has received more than 1,500 requests for surgery.

A short Hollywood Q&A column mentions that the role of Christine Jorgensen in the upcoming biographical film about her may be played by actress Anne Heywood. Heywood is uncertain of her desire and ability for the role, however.

Transman Andre Strydom will now be paid more as a clerk for the Public Service Commission of South Africa, as men are paid more than women for the same job position.

A somewhat stern answer to a transgender teen who wrote to an advice column seeking help essentially tells them that they’re out of luck for wanting to change their sex. While perhaps technically correct, the “advice” as proffered seems a little rude.

Dr. Richard Green has told the American Psychiatric Association that sex change operations and transition are not all they are cracked up to be. It’s noteworthy that he claims there have been 200-300 sexual reassignment surgeries worldwide, and 100 surgeries in the United States, since the procedures were begun in 1953.

A question to “Dear Abby” asks whether a stealth transsexual should fill in “Confidential” when asked for their sex on a job application. Abby, wisely, punts on the question.

A short question asks how is it that Christine Jorgensen could claim to be a mother. The answer is that she has supported four Korean orphans since their infancy.

Raquel Welch has been chosen to play the role of Myra Breckenridge, Gore Vidal’s transsexual protagonist.

“A number of doctors” at the First International Symposium on Gender Identity have said that sexual reassignment surgery helps patients. In other news, the Pope remains Catholic.

Socialite April Ashley’s pending divorce is in the news, along with a photograph of her and her husband, Arthur Corbett.

Film critic Rex Reed has has won a role in the movie based on Gore Vidal’s “Myra Breckenridge.” The novel, with a transsexual protagonist, promises to make an, um, unusual movie.

Mrs. Dawn Pepita Hall Simmons alleges that her sex reassignment surgery has somehow allowed her to become pregnant. Despite a rare public statement by Johns Hopkins hospital, which said it was impossible for her to become pregnant, she claims she was told she had a 50-50 chance. She was of course, lying.

Another update on Dawn Pepita Hall Simmons, along with a photograph showing her in a “maternity dress.” 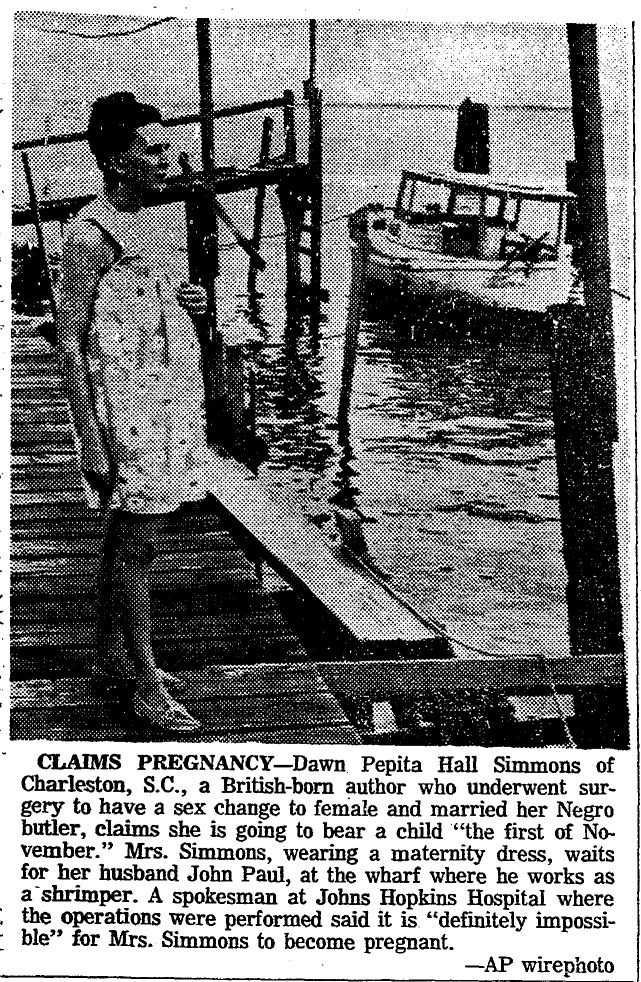 Two doctors in Brussels, Belgium have been cleared of a charge of causing the death of a 22-year-old transsexual woman, due to complications of her surgery.

Dawn Pepita Hall Simmons claims she has given birth to a “miracle child,” despite it being scientifically impossible for her to give birth. The Wichita Eagle has a similar story, but with a photograph. In truth, it is suspected that Ms. Hall’s miracle child was actually the product of an affair between her husband and another woman.

A short question and answer column in the Dallas Morning News claims that the first attempt at a sex change was an attempted transplant of the sex organs of a rooster into a hen.

An article which repeats earlier news from the year simply mentions that Johns Hopkins hospital is performing and endorsing sexual reassignment surgery. Meanwhile, the Marietta Journal publishes an interview with Christine Jorgensen, where she discusses how pleased she is with the biographical film about her which is in production. Christine notes skepticism on the claimed pregnancy of Dawn Pepita Hall Simmons.

April Ashley’s divorce case makes the news again, with an article simply noting that she is fighting divorce proceedings.

A rare article discusses the role of science and genetics in transsexualism, and notes the results of experiments on hormones injected into pregnant rats at different times of development of the fetal rats.

The Baton Rouge Advocate (Parade section) has a blurb about the film Myra Breckenridge, where it notes that Raquel Welch, the eponymous star, is terribly miscast. That’s not difficult to believe. Another article talks of how workers at a British pharmaceutical company are forced to wear “space suits” to prevent being altered by exposure to the estrogen-containing dust.

Another review of the Christine Jorgensen biographical film is published, and contains more quotes from Christine herself.

A review of the film Myra Breckenridge gives a lukewarm review of it, and notes that it is rated X for a good reason.

An article mockingly reports on the case of a transsexual woman only known as “Emily,” who has brought suit against her Minnesota employer for firing her because of her gender transition.