Standard Disclaimer: This page is a listing and links to news items regarding transgender persons from 1985. It is ordered by date of appearance in the news, not the date of the event. Note that the text summaries are not transcripts.

Dear Abby again deals with the subject of transsexuality, in this case a question regarding a woman who wishes to marry a transman.

Two separate articles on the same subject are printed, with differences between the two which are significant enough that I’ve included both. Both articles are extensive reports on Dr. Stanley Biber and his care of transsexuals at his Trinidad, Colorado clinic. The Mobile Register article is here (page one and page two), and the New Orleans Times-Picayune article is here.

A question to a sexual health advice column named “The Kinsey Report” answers a question about whether a penis can be transplanted onto a transgender man. The answer, of course, is no – for now.

A former deputy sheriff of the East Baton Rouge Parish has entered a plea deal regarding his having oral sex with Roy Metrejean Jr., a transsexual and male prostitute.

Hawaii Mitchell, a 20-year-old transsexual woman, has been convicted of murder and given two consecutive life sentences in prison. Mitchell, who claimed her gun accidentally discharged when she drew it from her purse during an armed robbery, said she wishes to complete her gender transition whilst in prison.

An editorial piece mocks the desire for convicted murderer Hawaii Mitchell to complete her gender transition whilst in prison.

Dear Abby yet again has a transsexual topic – in this case, from a transsexual woman who writes in that she is proof that there is a bias for paying women less, because after her transition, she was paid less for the same job.

A Hollywood update has two trans-related articles. First, it’s announced that Vanessa Redgrave is likely to portray transsexual tennis player Renee Richards in an upcoming biographical film. Second, it is noted that two transvestites showed up for the audition for Miss Hollywood 1985. Both were rejected for the part.

Eastern Airlines pilot Karen Ulane, who won lower court victories against her former employer after she was fired for being a transsexual, has not only lost her appeal in the Federal Court level, but the US Supreme Court has upheld her discriminatory firing. This decision will set back the progress of transgender employment rights for nearly 30 years.

Page 1A of the Aberdeen South Dakota Daily News has a brief interview with Christine Jorgensen, in connection with the premier of the new HBO Undercover America documentary, “What Sex Am I?” On page 11A, there is an article about the documentary. The Baton Rouge State-Times Advocate has another article regarding the HBO special, with slightly different quotes from it.

The New York Times has a positive review of HBO’s Undercover America documentary, “What Sex Am I?”

A question to a sexual health advice column named “The Kinsey Report” answers a question from a transgender woman regarding what the process is for transition.

Producer Linda Ellen, who is working on the film version of Renee Richards’ autobiography Second Serve, emphasizes that her film will be respectful, and will not have any transgender persons portrayed as “freaks.” This is a two-page article, and page two is at this link.

May 22 is a busy news day, as two transgender stories are printed. The first one garners the lion’s share of the news on this day, and due to differences in reporting, the inclusion of different photographs, and different facts which are available, I have four separate articles to share on the news that decorated Air Force veteran Bridgette Poi, a transsexual woman, is running for the position of Commander of her American Legion post in New London, Connecticut. The four articles provide several anecdotes of discrimination, even outright hatred which she has faced. From her brothers in arms, no less.

The second story of the day is more minor, but important. I have copied it inline below. 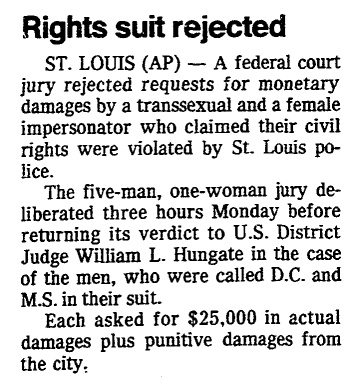 Another article is run on Bridgette Poi, the decorated Air Force veteran who happens to be a transsexual woman who is running for the position of Commander of her American Legion post.

Despite predictions from her opponents that she would never even be nominated for the position, transsexual Air Force veteran Bridgette Poi has been nominated to lead her American Legion post.

The television page has a tantalizing blurb, shown below, regarding “transsexual economics consultant Susan Kimberly. 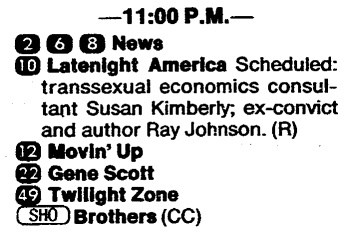 An article which was intended to be mostly about Martina Navratilova contains a couple of anecdotes regarding Renee Richards, focused on essentially how the 5-foot 11-inch Richards never “passed” nearly as well as she related in her autobiography. Why this is news…I am not qualified to state.

The election is over, and transsexual Air Force veteran Bridgette Poi has lost her election bid to lead her American Legion post. The Cleveland Plain Dealer and the Springfield Massachusetts Union have similar but different stories.

Now that the election battle to lead the New London, Connecticut American Legion is over, the Cleveland Plain Dealer has published an extensive and positive interview with transsexual Air Force veteran Bridgette Poi.

A question to a sexual health advice column named “The Kinsey Report” answers a question from a transgender woman regarding what the process is for transition. This is very similar to the answer given by the column on May 15 of this year (q.v.).

An article reviewing the life of Martina Navratilova has some mention of transsexual tennis player Renee Richards. However, it’s somewhat incidental.

Tennis star Boris Becker may be slated to portray Renee Richards in her upcoming autobiographical film.

The two Brooklyn men arrested on October 11 for the murder of a man, a 7-year-old girl, and a transsexual woman, may face the death penalty if they are indicted. It’s further noted that not only were the three murdered, but the bodies of the adults were doused with gasoline and burned.

The two Brooklyn men arrested on October 11 for the murder of a man, a 7-year-old girl, and a transsexual woman, have been indicted for the murders. Page two of the story is here.