Standard Disclaimer: This page is a listing and links to news items regarding transgender persons from 1983. It is ordered by date of appearance in the news, not the date of the event. Note that the text summaries are not transcripts.

The Parade magazine, a syndicated magazine carried by numerous newspapers, contains an article about Martina Navratilova and Renee Richards rejoining as player-coach. In my opinion, the article spends a disproportionate amount of time on Richards’ transition and surgery, and too little time on tennis. But then I would write that, wouldn’t I? Page 2 of the article is found at this link.

Transsexual dance instructor Jennifer Cleasby has filed a lawsuit against the Fred Astaire Dance Studio in Minneapolis, Minnesota, over her unfair termination. The manager, Walter Hartel, says that a transsexual woman dance instructor is not acceptable to students who pay $50 per hour for lessons. But…of course?

Victory! Karen F. Ulane, a Boeing 727 pilot who was unfairly fired from Eastern Airlines after her gender transition, has won both her job back and damages in Federal court! The article which introduced us to her may be found on the 1981 Transgender News page, and is linked directly here. 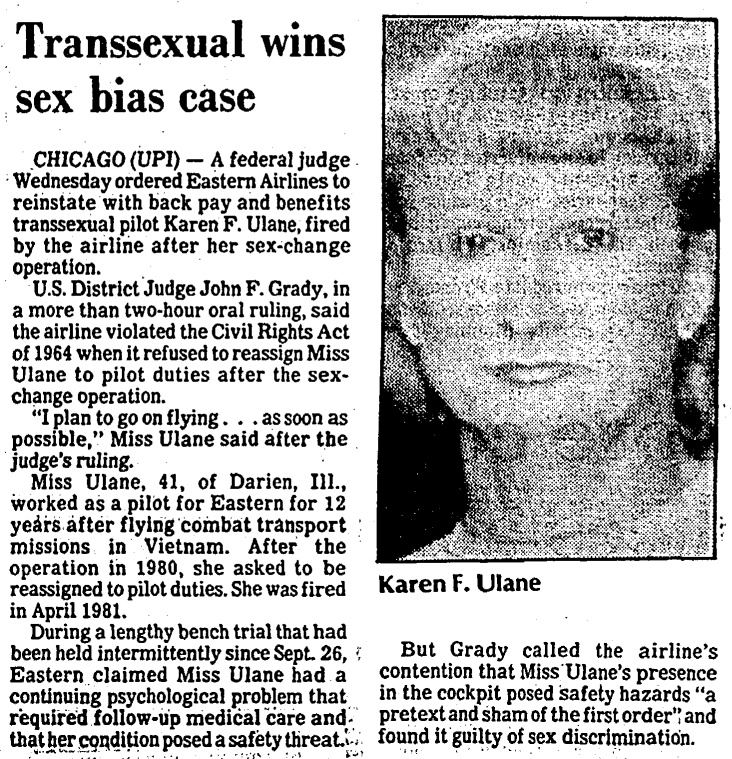