Standard Disclaimer: This page is a listing and links to news items regarding transgender persons from 1958. It is ordered by date of appearance in the news, not the date of the event. Note that the text summaries are not transcripts.

Yugoslavian Marija Djolan has undergone sex reassignment and is now a male soldier in the Yugoslavian Army, known as Marijan. 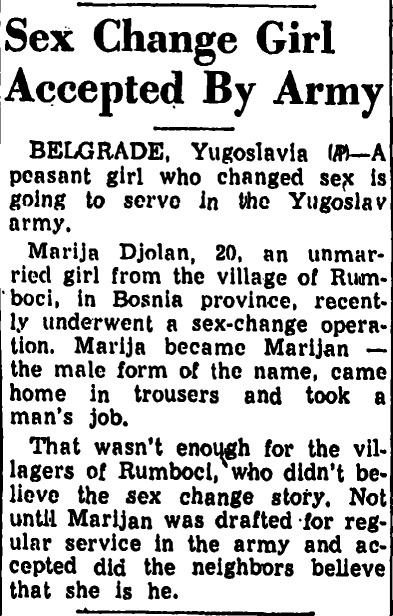 A gossip column titled “Midtown New York” has a brief blurb about Charlotte McLeod, in which she displays what may have been the first published case of cattiness between two transsexual women. The article says in total:

Charlotte McLeod, the hat-check girl at the Left Bank bistro, is a former GI who went to Denmark for the Christine Jorgensen treatment and stopped being Charles McLeod. Miss McLeod looks upon her predecessor with some disfavor, apparently. The other night Dick Kolmar asked Charlotte what she really thought about Christine. “I just wish she’d come in here some night,” snorted Charlotte, “so I could yell out ‘Check your hat, mister.’ “

A short blurb appears on the editorial page regarding Charlotte McLeod, which reads in total:

Four years ago ex-GI Charles McLeod submitted to surgery in Copenhagen and returned here as Charlotte McLeod. A few months ago McLeod took a job in the cloak room at the Left Bank…One night, in searching for keys to the cabinet, McLeod had to scour through the contents of a ladies’ handbag. “If there’s anything I really miss since my operation,” McLeod sighed, “it’s pockets.”

Now that’s something I can agree with.

A short note reports that Roberta Cowell is claims she will attempt “to try for a trans-Atlantic airplane speed record.” 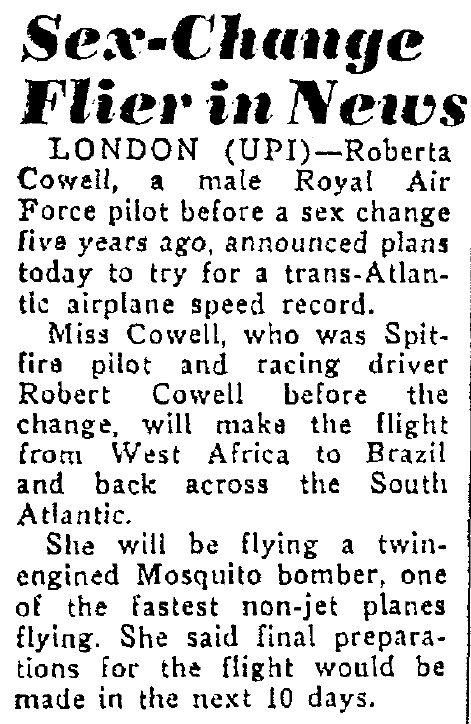 In somewhat shockingly brief news, Tamara Rees is said to be “fighting for her life after brain surgery.”