Standard Disclaimer: This page is a listing and links to news items regarding transgender persons from 1955. It is ordered by date of appearance in the news, not the date of the event. Note that the text summaries are not transcripts.

Society gossip column “Midnight in NY” notes that Charlotte McLeod is a secretary while “getting a night club act ready.”

A photograph of Charlotte McLeod is featured, and it is noted that she is working as a receptionist at an all-night beauty counter. Probably not the glamorous career she has hoped for.

A short blurb notes that Charlotte McLeod is being “rushed by a Nevada real estate man, Phil Irwin.” The slang term “being rushed” can mean a few different things, but in the context of the 1950’s New York tended to mean “being annoyed by someone hitting on them and trying to date them.”

A lengthy book review is printed regarding Roberta Cowell’s autobiography (which is reviewed by Una on this site). The reviewer, Dr. Walter Alvarez, is known historically for having written many articles in defense and support of transgender persons. A nice quote by Dr. Alvarez at the end of the article, reads:

Whenever I hear someone sneering at a person whose sex was mixed up at birth or later, I always say “Stop! Remember that but for the grace of God you might have been terribly cheated by nature just as that person was.”

In a brief advertisement, Tamara Rees is listed as appearing at the Alameda Theater, Sacramento, on July 28. 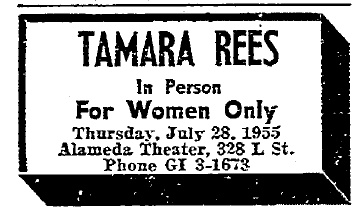 Tamara Edel Rees is reported to have wed James Courtland 3rd in a Methodist ceremony on July 23, Saturday. Courtland is reported as being a Los Angeles businessman who dated Rees for seven months prior to their marriage. The couple is said to be honeymooning near Sacramento, California.

Tamara Edel Rees, 31, is reported to have married James E. Courtland III, age 29. The couple is said to be honeymooning near Oakland, California. Courtland, who has been accompanying Rees during her lecture tours as her business manager, married Rees at a Methodist ceremony in Reno, Nevada. The article is somewhat detailed, and includes an interesting quote from the minister who wed the couple:

“I would not marry anyone who had undergone sex experimentation. I would not have done it.”

I did not like how the article referred to her as a “bride” in quotation marks.

Tamara Edel Rees is shown in a photograph with James Courtland 3rd, her bridegroom of 6 days (she married on Saturday, July 23), as she waits to go onstage to talk about her transition. (Boston American) The Boston Daily Record tells a similar story, and features a photograph showing Ms. Rees with a very shapely pair of legs. Another article mentions that the couple met at a house party, and that James Courtland was working as a make-up man and hair stylist for 20th Century Fox until 3 weeks ago. (Greensboro North Carolina Daily News) The Springfield Massachusetts Union contains similar information to the other articles.

Tamara Rees is listed in an advertisement with 4 shows daily, “plus 6 beautiful girls in natural color,” whatever that means.

Tamara Rees and her new husband are reported as being sued for breach of contract by a Los Angeles promoter. His claim is that an oral contract existed whereby he would be Rees’ promoter, and that this was voided after Rees’ marriage.

An advertisement for Tamara Rees’ show at the Alameda Theater features a small “before and after” photo set. 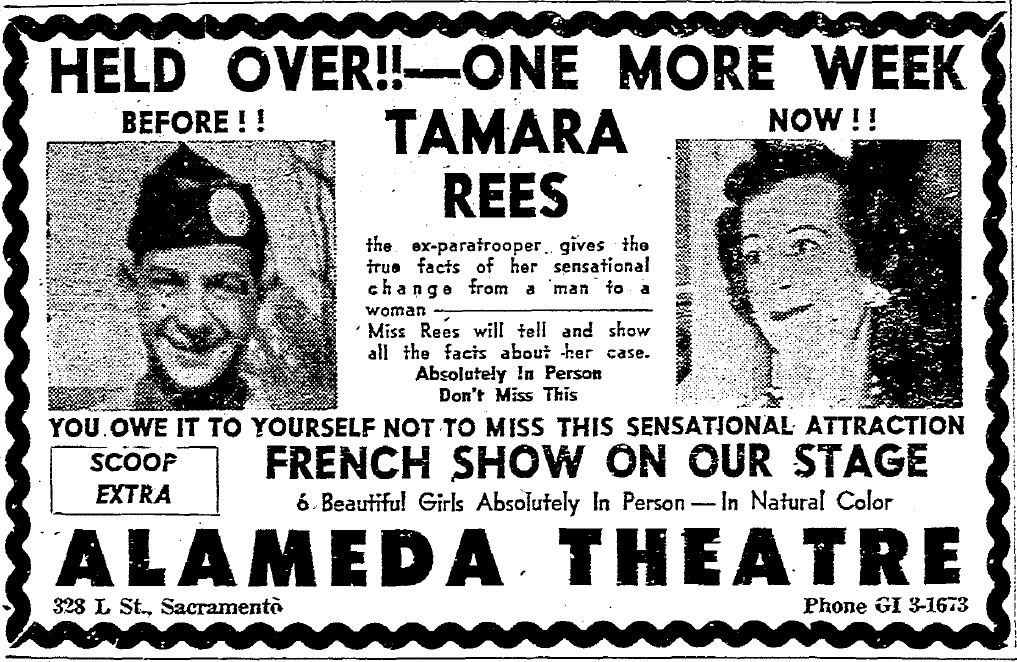 A doctor from Pakistan, Manuwar Ali, is scheduled to give a lecture on a medical procedure used to transition a woman into a man. No surgical details were given, other than stating the process was much more involved than the surgery used to transition Christine Jorgensen.

Police are reported to be seeking Tamara Rees on a bad check charge. Reputedly, Rees bounced more than 20 checks. The Sacramento Bee adds detail, reporting that the checks were passed in markets and hotels. The APB for Rees reads: “male or female, white American, 30, 5 feet 6 inches, 120 pounds, dresses like a woman.”

A short blurb notes that Charlotte McLeod “will shortly appear as a comedienne at a Greenwich Village bistro.”

Tamara Rees is reported to be jailed yesterday in Los Angeles over her bad check charges. She was released on $2,000 bail, and Rees is reported as claiming that she was arrested over a $105 hotel bill.

Tamara Rees is reported as as being released on $2,000 bail over a bad check charge, paid by her husband. The Sacramento Bee has similar information.

The personal manager of Tamara Rees claims that Tamara and her husband are separated, pending divorce.

Tamara Rees’ divorce is confirmed, with the reason being that her husband didn’t approve of her striptease career. (Baton Rouge State-Times Advocate) The Sacramento Bee largely confirms the basics, and in fact on page 36 of that same paper, a publication is made of Rees seeking divorce for “cruelty.” The Boston American on that day features a short article with a photograph. 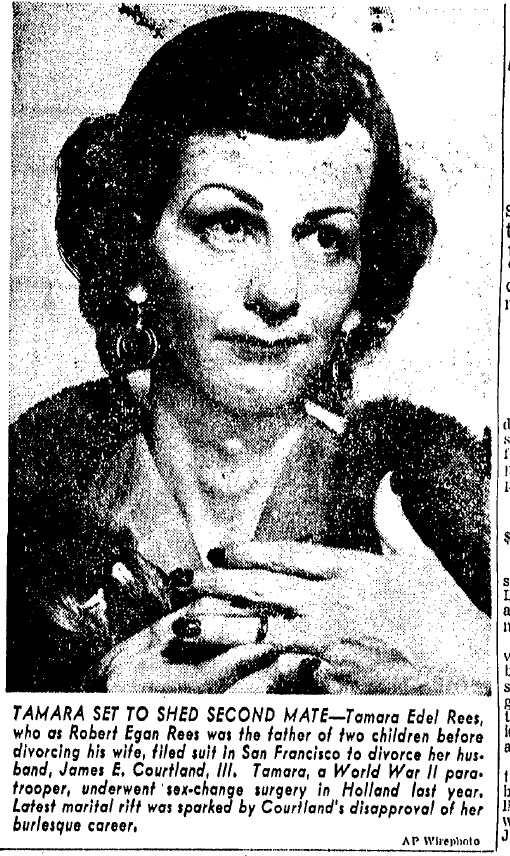