Standard Disclaimer: This page is a listing and links to news items regarding transgender persons from 1954. It is ordered by date of appearance in the news, not the date of the event. Note that the text summaries are not transcripts.

The transition of a former GI from New Orleans, Charles McLeod into Charlotte McLeod, is reported as being the second operation by “the Danes” to change sex of a man into a woman. The Baton Rouge State-Times Advocate runs two pages on the story (page 1 and page 8), where it’s noted that she was forced to have a kitchen-table genital surgery to get the Danish government to allow her to be operated on (the government had a ban on the “initial surgery”, which is not stated as being orchiectomy or penectomy). The Boston American runs the story on page 3, along with a side story that her father reputedly advised her not to undergo the surgery. And the Sacramento Bee runs a story as well, which contains most of the same information.

The stories continue regarding the gender transition of Charlotte McLeod. Two different stories run in the Boston American on page 3. The first one leads that McLeod has “gone into hiding” after her first meeting with reporters the prior day. The second one features quotes from McLeod’s father, and advice from Christine Jorgensen. The Portland Oregonian runs a story which is similar to what most ran on the prior day,except that it notes that the Baptist boarding house where she had been living decided to kick her out onto the street, due to there being too much publicity. Or at least that was the stated reason. The Richmond Times Dispatch runs a story which has no new information, but is included for completeness.

There is no new information in this article, but it has the clearest photograph I can copy at this time.

The news breaks about the gender transition of Roberta Cowell. I have a total of six reports from this day, including the Boston Daily Record, page 3 and page 7, the Dallas Morning News, the Portland Oregonian, the Sacramento Bee, and the Seattle Daily Times.

The father of Roberta Cowell is quoted as defending his daughter’s choice to have surgery.

I suppose because it fed the visceral curiosity of the average American, a news report notes that Roberta Cowell, contrary to earlier reports, will be unable to bear children. It’s somewhat indicative, I suppose, of the ignorance of the human body shown even by medical researchers at the time.

A note is made that Roberta Cowell has reputedly been offered a contract paying a thousand dollars a week to appear on stage at Blackpool.

Several newspapers nationwide capture a dramatic event involving Charlotte McLeod, who had an altercation with photographers and reporters at New York’s Statler Hotel. The Boston American, Boston Daily Record, and the Cleveland Plain Dealer have different versions of the same story. The Cleveland Plain Dealer has the best photographs I could find, and they are at the end of this report. The Sacramento Bee contains the best summary of the events, which I shall outline here.

A late-coming version of the Charlotte McLeod hotel fray runs, with no new information worth detailing. There is a photograph in the article.

A news article reports that the doctor who performed the “kitchen table” initial surgery on Charlotte McLeod in Denmark was found. It was noted that no charges would likely be brought.

A very poorly reproduced photograph of Roberta Cowell appears, shown with her mother, wherein it’s stated that it’s the first time since her surgery. In her autobiography (reviewed on this site), Cowell mentions nothing about posing for photographs with the press and her family, so it could be a personal photograph.

The same photograph of Roberta Cowell seen in the Boston American of the prior day appears, with little additional information.

John Cabell Breckinridge, who would later be known as “Bunny,” is reported to be meeting resistance from the Danish medical establishment in “his” desire to have surgery to complete a gender transition. In fact, a doctor interviewed by the paper was unhappy about sex change surgery in general, stating:

“It’s unfortunate that Denmark has become known as a haven for these people and their sex complications.”

An article with a photograph appears, wherein Charlotte McLeod defends her surgery, claiming that it was either transition or suicide. Something which I believe many of us can well understand. 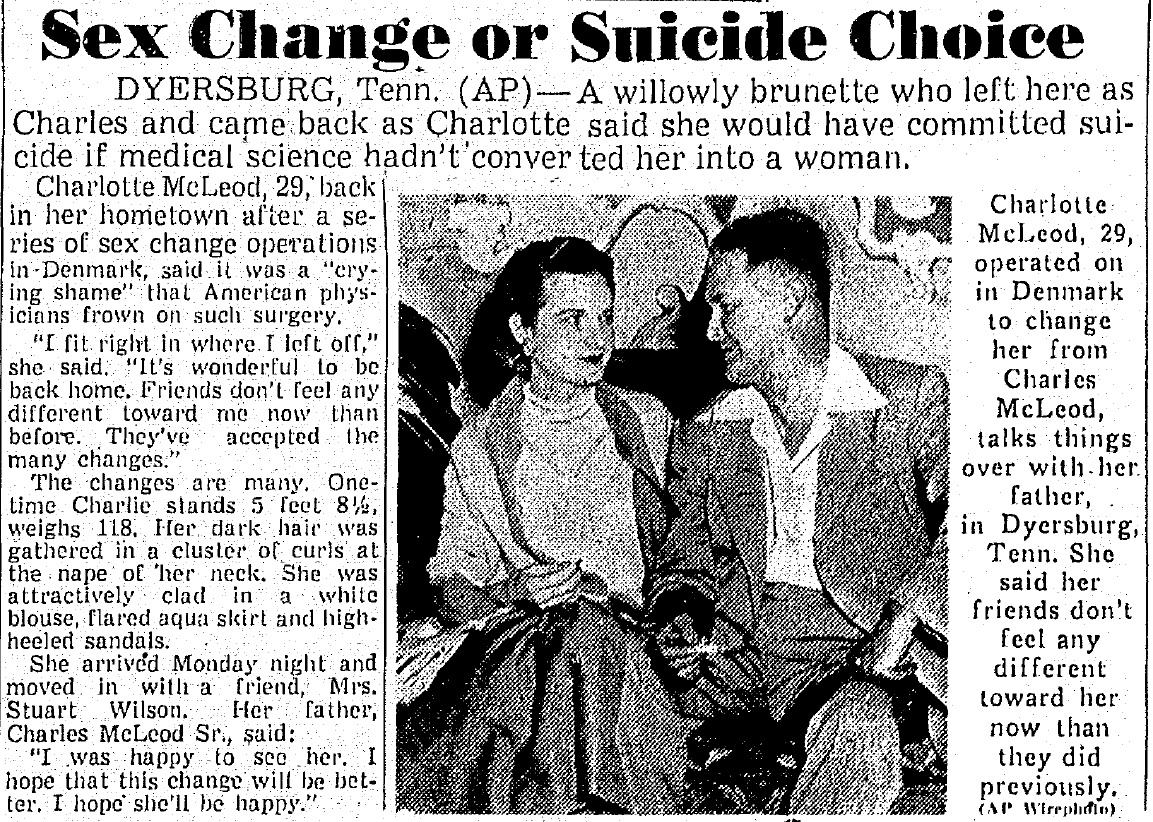 For some reason two nearly identical articles appear in the Boston Daily Record on different pages, each discussing the name change petition of Charlotte McLeod. Page 4 of that paper has some additional information, but not much.

Charlotte McLeod is reported as being seeking to perform in a nightclub act in New Orleans.

Charlotte McLeod is being sued by the owner of the Moulin Rouge nightclub in New Orleans, claiming a breach of agreement to perform at his club. As a result, a judge issued a temporary restraining order on McLeod.

Charlotte McLeod is reported as winning a lawsuit filed against her by a New Orleans nightclub owner. As we see in later news of this month, Charlotte will settle on the Sho-Bar club for her act.

The first of many advertisements for Charlotte McLeod’s nightclub act at the Sho-Bar appears. The advertisement is printed below.

Charlotte McLeod’s first nightclub show at the Sho-Bar is reported to be a big hit, or so this advertisement would tell us.

Charlotte McLeod’s nightclub show appears again in an advertisement. In what might be a way to convince males to attend the event, her measurements are given, being 5 feet 8.5 inches, 125 pounds, waist 24.5 inches, bust 36 inches, hips 37 inches. Values which appear to me to be difficult to swallow for someone who is genetically possessing XY chromosomes. It’s also noted she is a “strikingly beautiful brunette with brown, very naturally wavy hair.”

Another advertisement for Charlotte McLeod’s nightclub show at the Sho-Bar.

A short blurb states that “publishing firms are scrambling over rights to the biography of ‘Charlotte’ McLeod, penned by a Washington newsman.”

The last advertisement I could find for Charlotte McLeod’s show in New Orleans. She is still showing at the SHO-BAR on 228 Bourbon Street, and the article notes that there are only “a few days left.”

Link to page 8 of the paper.

A short blurb states simply that “Christine Jorgensen’s rival, Charlotte McLeod, is planning to become a secretary if her show business career doesn’t take an upturn.”

Link to page 4 of the paper.

Tamara Edel Rees is reported to have changed her sex in January of 1954, in Amsterdam. Formerly T-Sgt, Robert Egan Rees, she was a paratrooper in World War II, having made 4 jumps behind enemy lines and fighting at Anzio. She was allegedly asked to leave the Netherlands “after a tragic romance with a man there led her to try suicide.”

The Springfield Massachusetts Union runs an article on Tamara Edel Rees, saying that she is the father of two children, and hopes to be a mother now that she has undergone gender transition in Holland. She is quoted as saying:

“I’m afraid to come home because I’m afraid of Americans. Europeans understand these things. They understand the pressures that can make you feel you are living apart from society. All I want now is peace and quiet. All I want is to be left alone. Will Americans let me alone?”

A bit more is said about her engagement in Holland on page 14. She also notes that she is “no Christine” and will not engage in public performance – a statement proven false in less than a month. Link to page 1 of the paper, and the article continues on page 14.

There are two articles published on this day, both of them about Tamara Rees. The first one is a double article from the Boston Traveler, and in part of them her mother says that they stand by their “son.” In the second article, there is an interesting quote from one of the Danish physicians who treated Rees (this one a psychiatrist):

Another article about Tamara Rees, this one casting her mother as being distraught.

The mother of Tamara Edel Rees is quotes as saying she wants her “son” back in the United States so she can take care of “him.”

Link to the article.

Tamara Edel Rees insists that “Of course I can marry” in page 1 of the article. In this page and page 8, she makes several grandiose statements about being engaged in Europe, how she doesn’t want to stay in Sacramento, and how she has so many offers to tell here sensational story.

The Boston American runs an article on the interview with Tamara Edel Rees at her parent’s home. And the Sacramento Bee has a photograph of Tamara Edel Rees registering her new name and sex change with the United States Social Security Administration. A side article mentions that harassing phone calls have been “flooding” the Rees home. 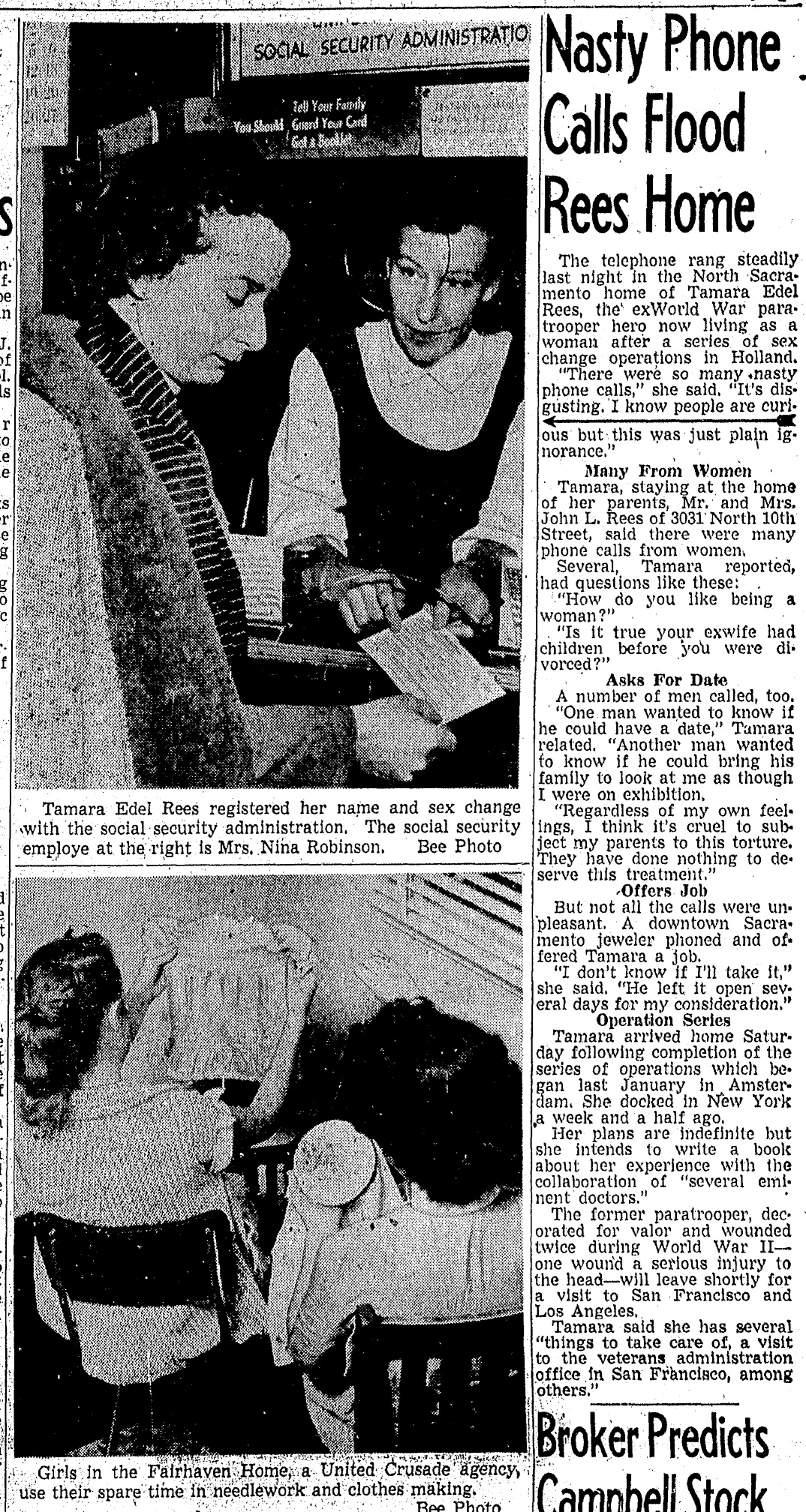 Tamara Edel Rees is reported as working on a book of her experiences, tentatively titled “No Return.”

A photograph of Charlotte McLeod graces the newspaper in a very short article on page 4.

Tamara Edel Rees is reported as planning a major entry into show business as a “cafe performer.” 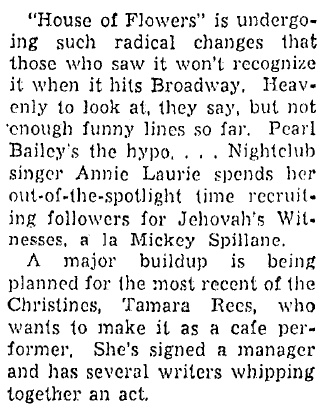