Hello everyone! On Trans Talk this month I am going to cover two topics. First I’ll speak with transgender historian and activist Cristan Williams about the recent repeal of Houston’s anti-discrimination ordinance, which some are claiming is the first major loss in the war for transgender rights. Then we will be talking with Caroline Gibbs, the founder and director of the Transgender Institute here in Kansas City, to discuss some very exciting upcoming events and to talk a little about transgender history, and the future, in our city.

I will also give a breakdown of some of the LGBT news this week, and I will finish up the show with the community calendar update. I do hope you will be able to join me this Saturday, November 28 at 1:00 pm on 90.1 KKFI, Kansas City Community Radio! You can also stream the program live on kkfi.org.

Transgender professionals who are out and proud are uncommon. The higher demands of the corporate environment are bad enough, but when you are someone who directly sinks or swims based upon the reaction of your clients, the situation becomes even more dicey. And for the case of attorneys who have their own practice, sinking is more common than swimming.

My best friend in the world, Madeline Johnson, is an attorney who is an out and proud transgender woman, and she has had to fight years to build a successful practice. This article tells of another transgender attorney, Katie Sprinkle of Dallas County, Texas, and how she fought to make her way in the business world. And how she, like my friend Madeline, continues to fight on behalf of her clients every day.

For transgender lawyer with own practice, change has been good | Dallas Morning News.

I reported earlier on a transgender substitute teacher in the quaint hamlet of Lumberton, Texas, who faced losing her job after bigoted parents complained about her transgender status. In the last news update, Laura Jane Klug had triumphed and won her job back.
Or wait – it turns out that the school district has given her a job which bans her from the classroom! From the article:

Last week, Klug accepted a full-time position with the district through the end of the school year, but as a condition of employment, she promised not to detail what her new position involves. She was able to confirm to Lone Star Q, however, that she is not working as a teacher.

Unfortunately, it’s a decision which Klug is being forced to take:

“I said I’m willing to do whatever because I really need a paycheck. It doesn’t make me very happy, but I think it should placate [the parents] somewhat.”

I think it’s terrible that the school has to resort to economic pressure to try and sweep this under the rug. The article notes that Klug might still have a lawsuit against the district, but that may be difficult to do in reality. 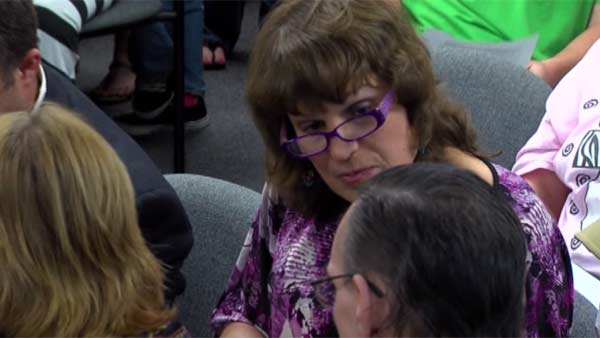 After a contentious school board meeting in Lumberton, Texas, a transgender substitute teacher who was suspended purely on account of being transgender (after complaints from the usual transphobic bigots was reinstated at her job.

This is awesome news, although it’s clear form this and other reports on the incident that the sole reason the School Board decided to keep her on was fear of a costly EEOC lawsuit – one which they would likely lose. Some comments from the parents are either saddening or disgusting, depending upon how much credit you want to give them.

“This has caused elementary students to be confused. Asking questions of their parents wondering why a female teacher has facial hair,” said one parent.

“We’re just now talking to our kids about the birds and the bees. I’m not sure how we’re supposed to explain this. He hired in as a male. He is a male,” said another parent.

Just think about explaining your bigotry to your kids someday. Like when I heard a woman in her 70’s say once “well, white’s only drinking fountains were just a ‘thing’….everybody did it.” Nope, nothing wrong there! 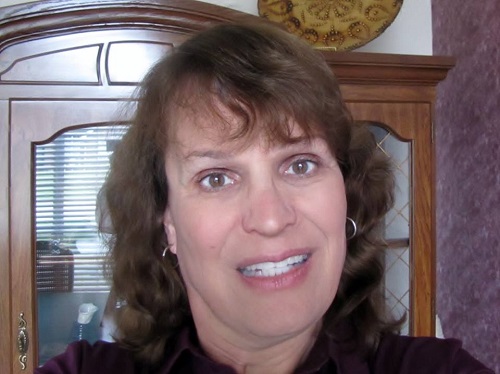 Sometimes I wonder about whether I would have been a good mom. Whether I would have raised my children properly and taught them how to respect others, be courteous and conscientious, be open to other cultures and new experiences, and face the world guarded yet unafraid to step up and do the right thing.

And then I read about “concerned parents” like the ones in this article, and I snort and think “well hell, I can’t do worse than them.”

The basics of the story, which my friend Danna (a transgender schoolteacher herself) pointed me to are simple and sadly familiar.

Act 1 – Invasion: The transgender teacher, also known as “the Satanic Succubus in Clouds of Sulfur (SSCS),” worms her way into the classroom to “teach” her unholy agenda, telling such lies as the South lost the American Civil War and the Earth is NOT 6,000 years old.

Act 2 – Discovery: Brave soldiers of goodness and light uncover the SSCS, and bring her into the light of Jesus. Unfortunately, they are not allowed to burn her at the stake (thank you very much, evil liberal Supreme Court!), but they can ensure that she will never work again!

Act 3 – Counterattack: The SSCS enlists her unholy allies – the transgender “activists,” the “ACLU,” the “Southern Poverty Law Center,” and (gasp!) the EEOC of our Muslim conqueror, Sultan Obama.

Act 4 – The Final Battle: the forces of good and light gather throughout the state, and ultimately chase the evildoers back to New Sodom (California). Texas secedes from the United States. No one notices any difference. 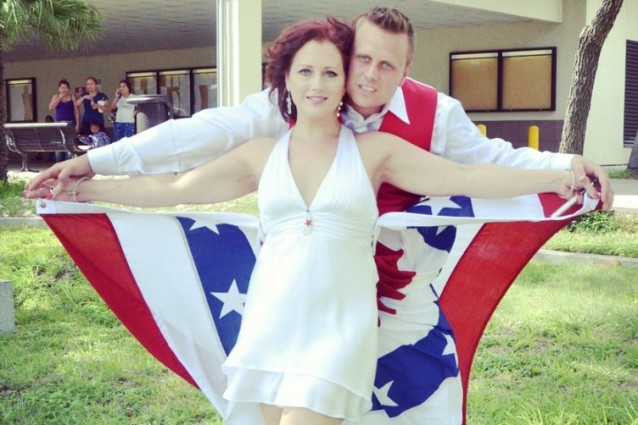 A huge victory for transgender people in the state of Texas!

The case is a very tragic one, and dealt at its heart with bigotry and raw greed. Nikki Araguz, a transgender woman, legally married a firefighter who later was killed while fighting a fire. Mrs. Araguz tried to collect death benefits on behalf of her husband, and in steps both the ex-wife and mother of her husband, who decided to sue to get their hands on the money and away from that “man.” A lower court agreed with them, “despite the fact that a 2009 law allowed individuals like (Mrs.) Araguz to use their sex change certification as a document to obtain a marriage certificate.”

This case is very similar to the local Kansas case of In re Estate of Gardiner, 42 P.3d 120 (Kan. 2002). In that instance a man married a transsexual woman who not only had had SRS, she had gone to extreme lengths to erase her old identity, even changing school records. When the husband died, suddenly the estranged son sued for sole control of the $2.5 million estate, claiming that the wife, J,Noll, was a man and therefore the marriage was invalid. The Kansas Supreme Court agreed, and thus was set two precedents in Kansas:

As you may expect, the bigots have a serious problem with #2, but that’s just too damn bad. The US Supreme Court has ruled that everyone has a right to marry *someone*, so they have to choose – create legal same-sex marriages in a state which has banned it by Constitutional Amendment, or recognize that heterosexual transgender marriages are legal. Two choices, pick one, bigots. 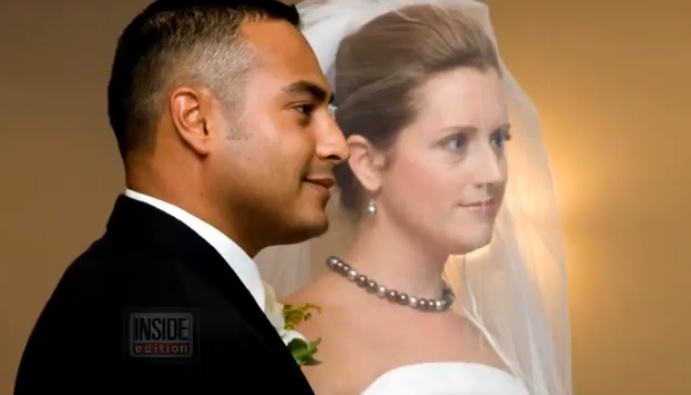 This is a sad story with a happy ending. Beautiful transwoman Nikki Araguz, who was raked over the coals in Texas for being transgender. She married a firefighter who was tragically killed in a fire, and then Texas decided to deny her survivor benefits by claiming SRS wasn’t good enough to prove she was married. The good news is that she met another man and fell in love, and after a fight in the courts and some searching, she and her fiancee were married in Corpus Christi.

There is a nice video at the link below, and a small photo gallery. 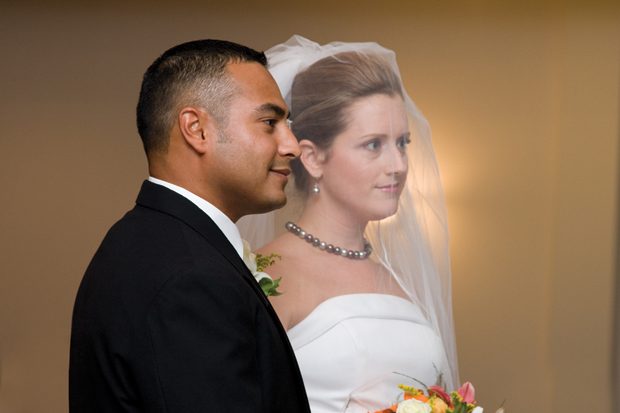 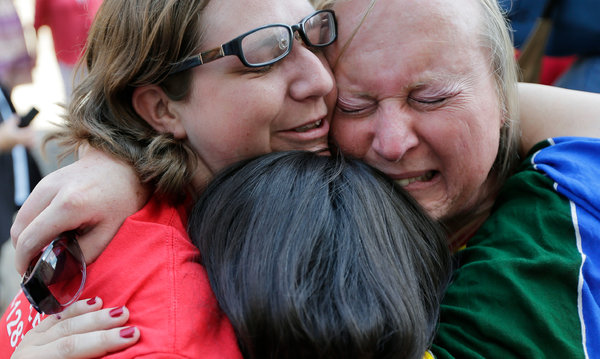 It’s huge news, but will it last? The state of Texas is already leaning on San Antonio, claiming they’ve violated the state constitution. Republican leaders are reported as being furious over it.

This quote from the Attorney General shows what is wrong with the mentality of the people who oppose this.

“The obvious problem with this provision is that it allows government to impose thought and speech control over any city official or board or commission member who may hold deep religious beliefs that are counter to the ordinance,” Mr. Abbott wrote.

Oh, really? I wonder if he’d feel the same way if Muslims were in charge of the city council and wanted to vote in line with Sharia law on certain matters…I’ll bet Mr. Abbott would have kittens over it.