Background: Gloria Steinem was one of the pioneers of the 2nd-wave feminist movement, and unfortunately one of the most visible and important critics of transgender persons. She fully supported the vile hate-speech book The Transsexual Empire – the Making of the She-Male and it’s author, Janice Raymond. She is most notorious for her comment about transsexual women, deriding us for needing surgery, claiming we were delusional and self-mutilating, stating mockingly “If the shoe doesn’t fit, must we change the foot?” She further mocked Renée Richards when she won her case in the New York Supreme Court, allowing her to play as a woman in the US Open, calling her a “manufactured woman.”

So now in a piece in the Advocate (linked below), Steinem, possibly finally waking up from her 1970’s haze and seeing which way the winds are blowing with 3rd-wave feminism since the late 1990’s, has decided that transgender women are OK in her book. Colour me underwhelmed – Steinem has been more and more lately trying to scramble to resolve her separatist and discriminatory views of the 1970’s with modern times, and in my opinion this is just another attempt by her to spin her legacy in a more positive light.

When she spoke out against my people in the 1970’s, she was one of the most popular and publicized celebrities of the political social movement. So her criticisms and even mockery of transgender people carried a lot of weight. Now she’s a C-grade has-been and her apology, even if sincere, certainly won’t be discussed on the nightly news – it will be echoed in a few blogs like this, and then quickly exit the stage. So paraphrasing former Secretary of Labor Ray Donovan, after having been falsely accused and acquitted, “Which office do (we) go to get (our) reputation back?”

Hey Gloria, I know I’m a nobody from nowhere, but if you want to ever gain a shred of cred among nearly 1 million transgender people you insulted, why don’t we see you out campaigning on our behalf? Why don’t we see you out at the Michigan Womyn’s Music Festival, decrying their transgender discrimination? Why aren’t you in California backing up the recent transgender protections for K-12 students which are under attack by the religious right? Why aren’t you pushing for transgender protection in the workplace and the passage of ENDA?

Do the right thing, Gloria. Show some real penance and honor.

On Working Together Over Time. 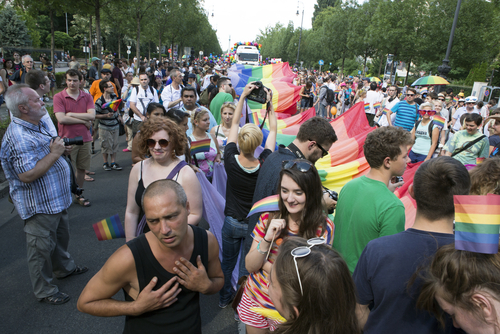 Really, the title says most of it. A good article exposing some of the worst actors and actions of the Trans-Exclusionary Radical Feminist (TERF) movement, some of the most dangerous foes we face.