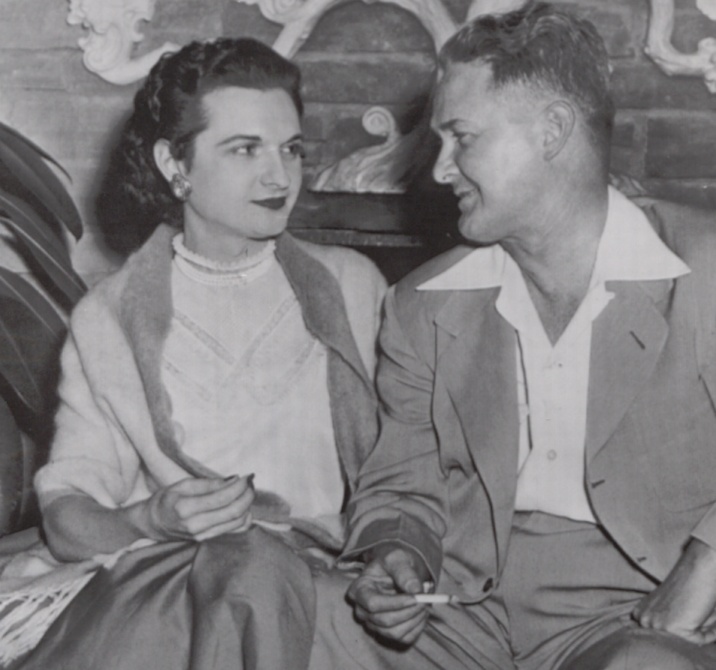 As some of you know, I purchase old media (photographs, magazines, prints, and books) relating to transgender history and post them here as full resolution scans, free of watermark, restriction, or charge. Recently it was pointed out to me that on page 2 of Charlotte McLeod’s autobiography, published in Mr. magazine’s 1956 Winter annual, one of the photographs had a piece of loose paper covering it (it was a piece of the magazine which fell off during scanning). And another reader asked if the autobiography could be uploaded in higher resolution.

To that end, I’ve rescanned the article in higher resolution, and fixed the damaged photograph. Those of you who have downloaded a copy to host elsewhere will need to download a new copy this page. 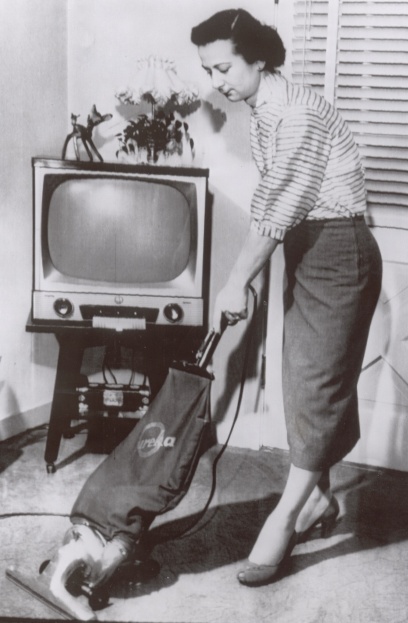 I’ve recently purchased two more original archival photographs for Transas City’s research division, and you can see one of them as the lead image of this post. The photograph shows Tamara Rees, the third “Atomic Age” transsexual woman, in a stereotypical domestic setting (for more information and photographs about Rees, including a copy of her incredibly rare autobiography which we were able to obtain, please visit our Tamara Rees page). The other photograph follows, and shows Rees both before and after her gender transition. 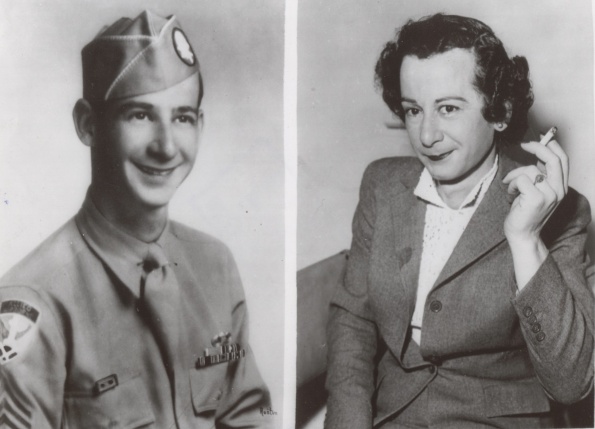 At first blush the vacuuming photograph looks quite silly and pointless – why on earth, when she has gone through so much in her gender transition, did the press think it was newsworthy to portray her vacuuming her floor? To a 21st-century eye, this photograph smacks of silliness at best, and a rigid bowing to paternalistic stereotypes at worst. But because we study history, and do not go by first impressions only, we can tell some of the back-story behind the lead photograph. 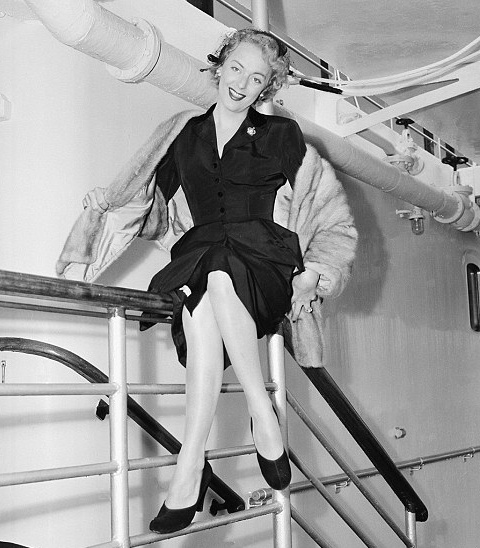 Christine Jorgensen, in a typical “starlet” pose on the deck of the Andrea Doria.

When Christine Jorgensen entered the public eye on December 1, 1952 as the first of the Atomic Age transsexual women, she was heralded as a wonder by many reporters; a triumph of Western science. And when the blonde-haired and svelte Jorgensen landed in New York in February of the following year, she was greeted by a nova of flashbulbs and untold levels of publicity. Most of the publicity was positive, albeit there were some detractors and naysayers. Jorgensen continued to maintain this image of a starlet, impeccable in dress, poise, and manners; with that bright smile and great figure through almost all of her career. 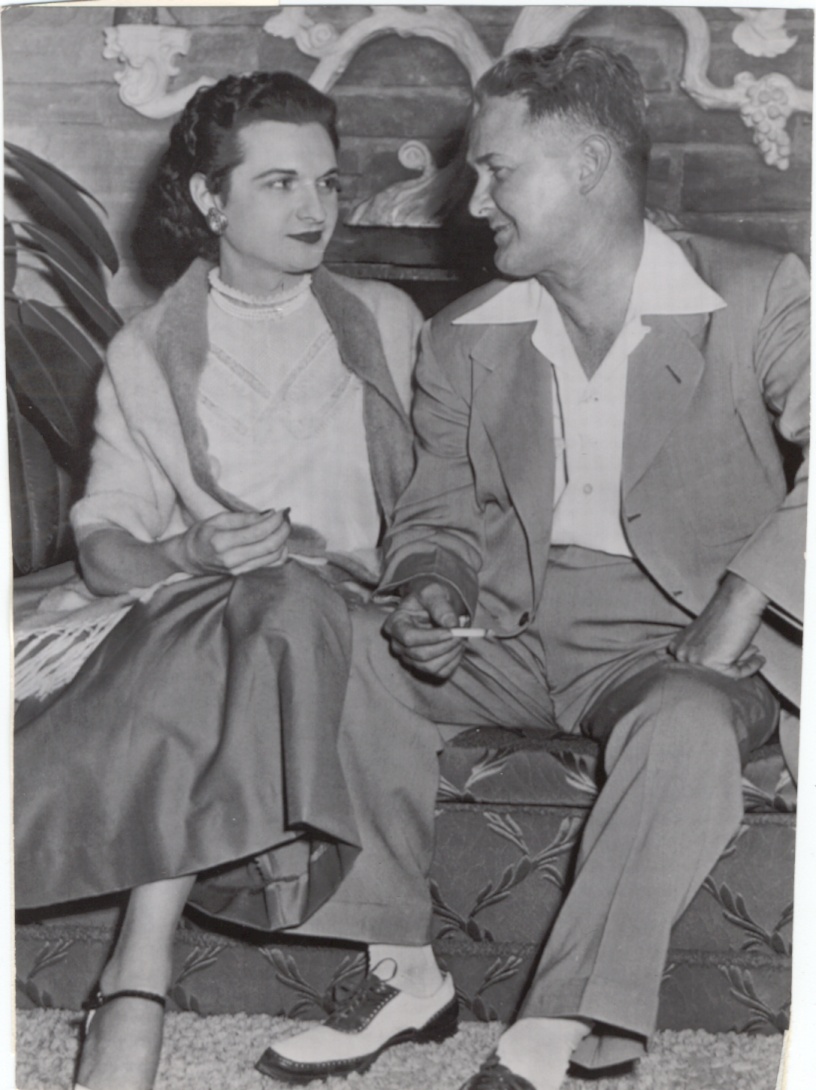 Charlotte McLeod with her father.

Charlotte McLeod was the second of the Atomic Age transsexual women, and she immediately discovered that being the “second” in something is not nearly as exciting as being the first. McLeod returned to the United States fully expecting the Jorgensen treatment, and instead ran into a crowd of reporters who were much more skeptical, with one of them even having an altercation with her which dumped her to the floor of a hotel. McLeod was pretty, but she was not the smiling, socially-conscious blonde beauty that Jorgensen was. McLeod was a quiet and reserved person, who shunned the press and did not react with grace and poise when confronted about her gender identity. At the same time, McLeod resented her second-place status bitterly, and has been quoted in several historical documents in our Transgender Newsbank stating just that.

So then Tamara Rees arrived on the scene, and the public was starting to wonder: OK, Jorgensen was an interesting case, but now…where is science leading us? Boys becoming girls; where does it end? Instead of gender transition being a once-in-a-billion thing, it now is showing up regularly in the news. Every dad and mom in America had to start wondering, as they looked at their little boy playing with the gender-typical trains, guns, and baseballs – is he going to be wearing a dress some day? It’s at this time in history that the backlash against transsexual women begins to foment. 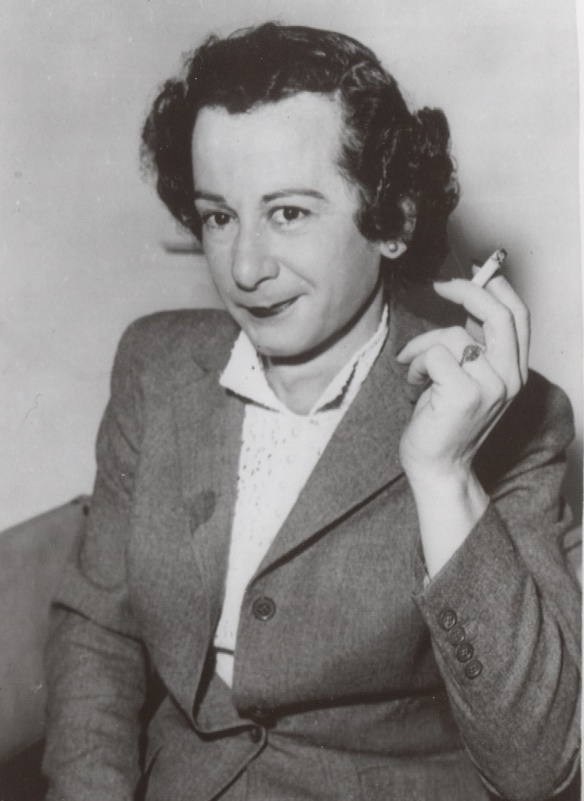 Tamara Rees in an unflattering pose.

It did not help that Rees was also much less able to “pass” than Jorgensen or McLeod. Being of a larger frame and not having the dazzling looks of Jorgensen, or the petite darkness of McLeod, Rees was much more of an average transsexual woman. She did not turn heads, despite her being much more amenable to the press and publicity than McLeod. She was not nearly as polished in her speech as Jorgensen, and fumbled through the couple of interviews which I’ve seen of her. Like McLeod before her, Rees also resented Jorgensen, and again we have quotes of Rees lashing out at her “rival.”

Rees tried very hard to present herself as a typical American woman, and thus she appeared in several photographs showing her doing stereotypical female activities – such as vacuuming the floor in a dress and heels. This is similar to the photographs found in the autobiography of British transsexual woman Roberta Cowell (q.v.), which featured her playing the piano at home, cooking, shopping, etc. All to try to create a better image for herself and to portray an air of “just another woman; nothing to see here…”

Roberta Cowell in a stereotypical setting.

At that era in history, transsexual women were required to be strongly gender binary. Remember, there were perhaps less than 5 surgeons in the world performing sexual reassignment surgery (the exact number is not known), and each of them and their associated psychiatrists demanded that a transsexual woman be rigidly gender-binary in their thoughts and feelings, or else surgery would be disallowed. Recall that even the late, great Dr. Harry Benjamin denied Renee Richards estrogen in the late 1960’s because she expressed that she was lesbian. 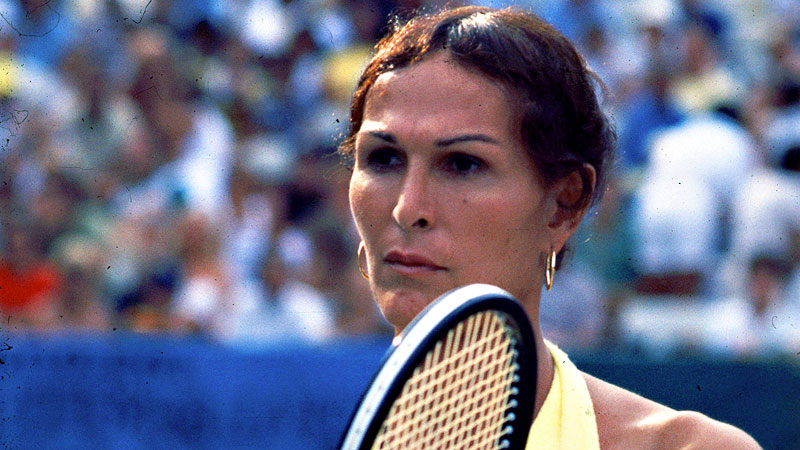 Now yes, in truth to the best of my research it appears that Jorgensen, McLeod, and Rees were in fact all strongly gender-binary transsexual women. But if they hadn’t been, they would have still had to go through the same theater – Jorgensen flashing her legs, McLeod dressed in a fur stole, and Rees running her Eureka. It would have been a matter of survival – doing anything, absolutely anything, so you can have your body aligned with your brain. 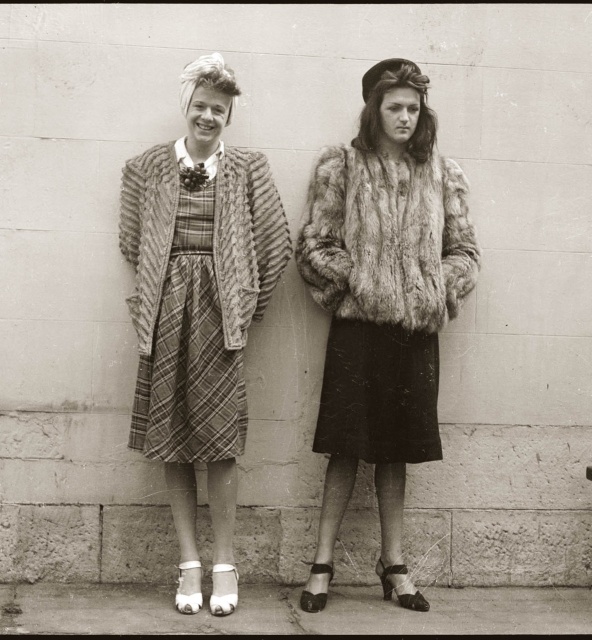 I’ve added many old photographs of transgender and crossdressing women to the Transas City archive lately, and continue to add them. I thought as a random update I’d show you these two photographs, and give a little history of them.

The main photograph above is a mug shot of Neville McQuade (age 18) and Lewis Stanley Keith (age 19), at the North Sydney Australia Police Station, early June 1942. Arrested for “being idle and disorderly persons, having insufficient means of support, and with having goods in their possession believed to be stolen,” they were almost certainly transgender prostitutes. They served one week in jail, a surprisingly lenient sentence.

This second photograph is a very rare one showing the second Atomic Age transsexual woman, Charlotte McLeod, at work as the receptionist at an all-night beauty counter, circa late 1954/early 1955. Unlike Christine Jorgensen, Charlotte McLeod did not receive the fame and attention which she desired, and after a short attempt at a show business career, disappeared into relative obscurity.