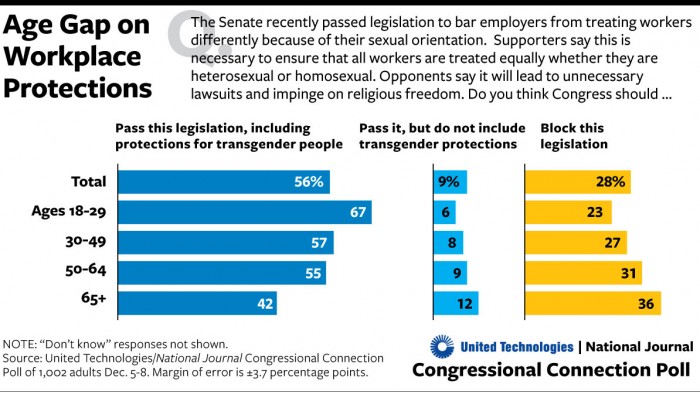 Most of us know that protections for us in the workplace are few and far-between. We also saw that for the first time the Employment Non-Discrimination Act (ENDA) passed the Senate with protections for transgender workers included, although the Republican-controlled House is refusing to even consider it on ideological grounds alone.

This report was a survey of how many Americans back protections for LGB and T workers, and pretty unsurprisingly, there is a clear inverse proportion between age and acceptance of our people. What is disturbing about it, however, is what I call the “equality gap.” This term refers to the gap in support between LGB and T persons, which in this poll, on a nationwide basis, is shown as being as 9%. So 9% of Americans say “yes! Protect LGB workers! But not those creepy transpeople, like, yuck!”

I must also use this post as a vehicle to post my disappointment in President Obama for not mandating by Executive Order that all government contractors include LGBT protections. Most medium and large companies in the country have some government contracts they work on or supply, and an order such as that could easily roll in protections for more than half of us overnight. OK, I’m not horribly disappointed, as he’s done wonders for our community, but that one move, helping to give us more secure sources of income, would make perhaps one of the largest improvements in our condition in history.