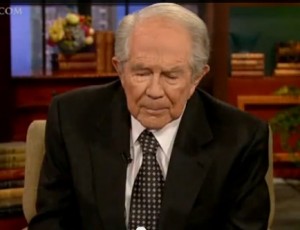 From the category of “whodathunkit,” we have a video interview with long-time virulently anti-gay evangelist Pat Robertson, where he seems somewhat open to transpeople. You can watch the video, or read the choice quotes from it below.

Responding to viewer David’s question about whether he should recognize as female two coworkers who are apparently transgender, Robertson starts by saying he doesn’t “understand all that.”

“But I think there are men who are in a woman’s body,” the 83-year-old former Baptist minister continues. “It’s very rare, but it’s true. Or women that are in men’s bodies. And they want a sex change. And that is a very permanent thing, believe me, when you have certain body parts amputated, and you have shot up with various kinds of hormones, it’s a radical procedure. I don’t think there’s any sin associated with that — I don’t condemn somebody for doing that.”

What is telling about this is that it pushes another wedge between the LGB and the T, from an unusual source. I wonder if Robertson’s attitude is shared by other conservative Christian leaders in any way?

WATCH: Pat Robertson Says Being Transgender Is Not a Sin | Advocate.com.