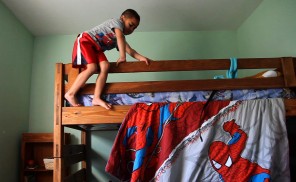 Thanks to Prof. Kerewsky for pointing me to this article. This part is inspirational.

At 6, Tyler is on the younger side of the transgender community. But that’s not because he is unusual. Most transgender adults say they knew from a very young age that they felt miscast in their bodies. And doctors agree that gender identity usually manifests between 3 and 6 years of age.

Instead, Jean and Stephen let Tyler pick his name, his clothes and his toys. Instantly a happier, healthier child emerged from the surly preschooler who was always fighting over dresses and leotards and the word “she.”

Transgender at 6: For Tyler and his parents, no second thoughts – The Washington Post.