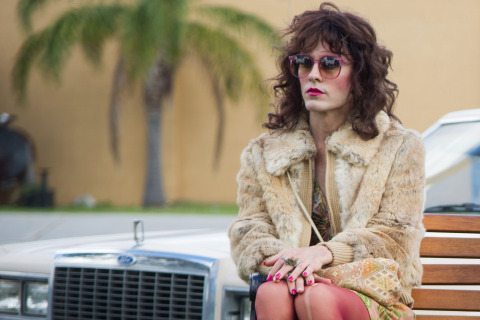 I confess I’m completely ignorant of this film. I never saw it, and on the advice of friends who were turned off by Leto’s performance, I never even wanted to see it. Time magazine is running an editorial which really casts the film in a damning light, especially with the revelation that the character of Rayon, the flighty transgender drug addict and AIDS victim, was created out of whole cloth for the film. Apparently so she can portray every single negative stereotype about us on the big screen.

Hollywood has long found humor in aspects of transgenderism — be it simple cross-dressing or actual transexuality — and shows no signs of letting up. From “Some Like It Hot” to “Tootsie,” a guy in a dress is always deemed clever and funny. And the trend, if anything, shows signs of escalating from benign and misinformed to threatening. As Jos Truitt notes at feministing.com, the trailer for the upcoming film “Bad Words” shows Jason Bateman telling a young South Asian boy to shut his “curly hole.” That’s slang for female genitalia and allegedly funny for its callout to Thai lady-boys. Meanwhile, the “22 Jump Street” trailer doesn’t even cloak its transphobic “humor” in allusions, with characters cracking wise about the prison rape of trans women. These are the coming attractions, the parts the filmmakers or their marketing consultants think are the most enticing. “Most of the increased visibility trans women are getting in Hollywood right now is not a good thing — it’s cruel and it’s dangerous,” Truitt wrote.