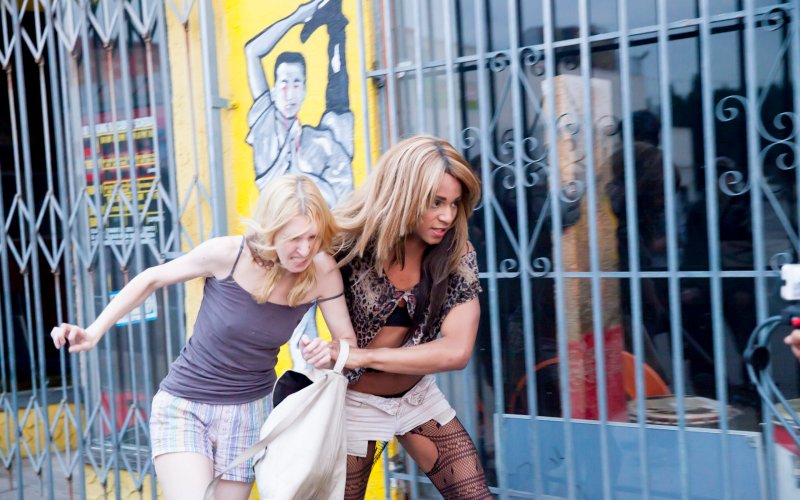 Shot on tricked out iPhone 5s’s along the streets of L.A., Sean Baker’s no-budget revenge odyssey ‘Tangerine’ is not only a staggering achievement, but a brilliant film.

The plight of transgender prostitutes is one I know very well, having served for a time on the board of directors of a charity which provided needed assistance to prostitutes on the streets of Kansas City, a very large number of which were transgender women of color. And there really isn’t anything positive at all about the conditions in which transgender prostitutes must work and live, the violence and degradation they endure, drug and alcohol addiction, the lack of basic services – let alone health care. In short, there really isn’t anything humorous at all about the world of sexual exploitation.

But art finds humor even where it seems impossibly irreverent. And so long as the characters are treated with respect and allowed their own dignity, even a portrayal of transgender prostitution could have artistic merit without being offensive.

Enter the indie film Tangerine, scripted by Sean Baker and Chris Bergoch and turning heads after a splash debut at the Sundance film festival. Set in the strip of Santa Monica Boulevard, a common venue for transgender prostitutes bordered by the trendy gay mecca of WeHo and the working-class ethnic enclaves of East Hollywood, the story of Tangerine revolves around Sin-Dee (Kitana “Kiki” Rodriguez) and her quest to punish her man (James Ransone) who was unfaithful with one of his cisgender prostitutes while she was serving a month in jail. This naturally sets Sin-Dee’s into a furious rampage across Hollywood one Christmas Eve, with her best friend, fellow prostitute Alexandra (Mya Taylor) accompanying her.

There is a preview of the film below; it is most definitely not work-safe, with a lot of profanity. What has many talking about Tangerine is not the subject matter, but the fact that the entire film was shot on a shoestring budget using three iPhone 5s smartphones. Yes, that’s right, filmed by smartphones.

There is more detail about the film at the two links below the YouTube video. It’s difficult to get a clear impression of the film from a 2-minute preview, I’m going to give the film a chance and see it or buy the DVD as soon as it is released. I confess that even though I tried not to, given the gravity of the overarching topic, I actually laughed out loud at the back-and-forth witty dialogue between Sin-Dee and Alexandra.

‘Tangerine’: How One of the Most Stunning Movies of the Year Was Shot on an iPhone – The Daily Beast

The Plight of the Transgender Prostitute – The Daily Beast