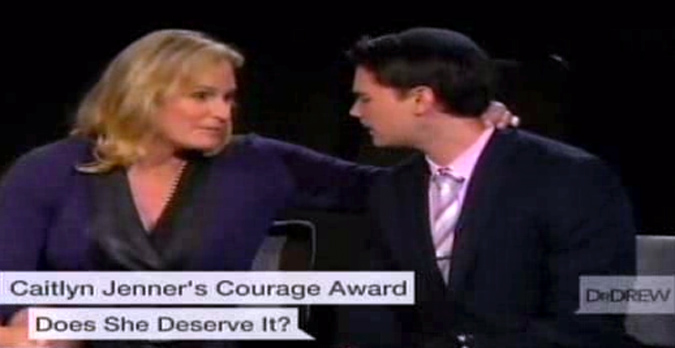 Journalist Zoey Tur, who has undergone a highly public gender transition and who has also been responsible for even more highly public controversies among the transgender community, has had a police report filed against her by Breitbart News Senior Editor-at-Large Ben Shapiro. The complaint was prompted by the following escapades which occurred during a televised discussion regarding Caitlyn Jenner. From the Washington Times:

The report follows a tense exchange between Mr. Shapiro and Ms. Tur on HLN’s “Dr. Drew On Call” over Caitlyn Jenner’s receipt of ESPN’s Arthur Ashe Courage Award. Ms. Tur grabbed the back of Mr. Shapiro’s neck and said, “You cut that out now, or you’ll go home in an ambulance,” after Mr. Shapiro called her “sir.”

Mr. Shapiro later alleged that Ms. Tur had threatened him after the appearance, saying, “I’ll see you in the parking lot.” CNN security escorted Mr. Shapiro to his car after ensuring Ms. Tur had left the premises, according to Breitbart News.

Ms. Tur also tweeted “me too” on Friday in response to a Twitter user who said he’d liked to see Ms. Tur “curb stomp” the Breitbart editor.

Seems a bit over-the-top, yes? Tur is a polarizing person in the transgender community, for such other controversies as her “investigation” via Facebook of transgender woman Carlotta Sklodowska, who was harassed for using the female facilities at a Michigan gym. Tur “speculate(d) that Sklodowska was actually a male-identified crossdresser expressing a “sexual fetish.” and further “directly accused Sklodowska of entering the locker room as a sexual predator aiming to “perv out on women.”

“…implied that some trans men are not actually trans because they just have polycystic ovary syndrome (PCOS), a hormone imbalance found in some females. “With hormone replacement therapy,” she proclaimed, “it can be treated and it can adjust people back to where they would be.” Interviewer James St. James confirmed, “So you’re saying that they might think that they’re transgender when actually it’s just a medical situation?” “Correct,” Tur responded. Diego Sanchez, Director of Policy for PFLAG National and a transgender man himself, told ThinkProgress that Tur’s assertion is “false.” He should know; his own endocrinologist, Dr. Vin Tangpricha, has conducted much of the available research on the topic.”

She also twice outed Caitlyn Jenner on television prior to her transition, and she has made inaccurate legal claims, which she did own up to, regarding Title II versus Title VII and its relevance for protecting transgender persons.

Tur, who holds no journalism degrees nor any research credentials nor scientific training which would provide her backing for making the statements which she has made, has been brash and largely unapologetic about her stances and statements. With this latest television embarrassment, she is again casting transgender persons in a bad light. I don’t have a circuit of pet television spots to appear upon, but I have enough professional training and doggone common sense to understand that you do not physically assault your opponent during a debate, nor make vague threats of violence in person! Honestly, I really don’t get it.

Tur insisted to ThinkProgress that she doesn’t think of herself as a spokesperson of the trans community, adding that she was “fully thinking of the [good of the] community” when she made her comments. But Sanchez warns that despite her intent, the way she speaks about transgender issues — and the way the media allows her to speak about transgender issues — could still be problematic. “It is crucial for the health and well-being of all people who are trans that one person does not declare themselves or be declared a spokesperson for an entire community,” he told ThinkProgress. “It is also crucial that the media not approach anyone in that way. One person’s experience is exactly that: one person’s experience.”

Juro, like Stabler and Sanchez, worries that the political stakes for transgender equality are too high to allow for such problematic messaging and representation. Her advice to Tur is simple: “Please stop saying stupid shit on television.”