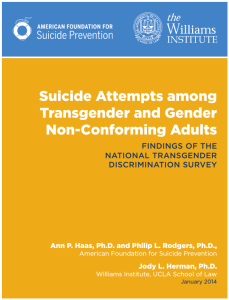 A new study was released today from the Williams Institute at UCLA and the American Foundation of Suicide Prevention. To say that the study was more bad news for an already oppressed minority would be understating the issue. Highlights from the study report an increased risk of suicide among Trans Men (46%) and also among Trans Women (42%) with disabilities (65%). High prevalence of suicide attempts were also found among those who had ever experienced homelessness (69%) and those who reported a doctor or healthcare provider refused to treat them (60%). For more statistics from this report and to read and review the entire report go here.