There seems to be some confusion among members of the transgender community as to how to take the standard micronized estradiol pills which are frequently prescribed.

I have met several transwomen who are taking micronized estradiol by simply swallowing it (oral administration), when there is much more benefit to be had by taking it sublingually (dissolving it under your tongue). Some claim they “heard” that the two were about the same, and it doesn’t matter which method they use.

It turns out research has been done on the relative effects, and there are some interesting facts and figures from several technical papers and research studies.

When micronized estradiol is taken orally – just swallowed – its bioavailability is only about 5% – meaning 95% of what you take doesn’t actually do any good! Whereas the bioavailability of sublingual estradiol is about 25% – five times as much. Why is this so? Primarily because when you take estradiol orally, some of it is destroyed by stomach acid, and then what is left over is then attacked by your liver. (Kuhl, Zhang) The liver converts the potent estradiol into the less potent estrone and estrone sulfate. Not only that, but it adds stress on your liver, which is not an organ to mess around with – liver failure is a horrible way to die. When you take estradiol sublingually, your oral mucosa are able to absorb quite a lot of the estradiol directly into the bloodstream, bypassing the liver at first and giving you a higher bioavailability. (Zhang) Ultimately your liver will break most of it down, but less than it has to from the oral route. Now it is true that your saliva will destroy some of the estradiol, but less than your stomach acid will. (Kuhl)

One interesting topic to consider when taking estrogen is how closely your ratio of estrone to estradiol is in your bloodstream. Estrone is one of several natural estrogens which your body produces (along with estradiol, estriol, sulfuric acid esters, and glucuronic esters). Estrone is described as a “weak” estrogen, as it has only about 4% of the potency of estradiol. Its true function is not completely understood in the body, except that when it is in sulfate form it has much longer half-life than estradiol and can be converted to estradiol. Estrone also tends to remain in circulation longer, rather than accumulate in our tissues, so it may lead to a “spreading out” of estrogen peaks. In a typical cisgender woman before menopause, her ratio of estrone:estradiol is about 1:2. When estradiol is taken orally, the resulting ratio shifts to 5:1. However, sublingual estradiol tends to more closely mimic real life, at a ratio of 1:3. Intramuscular estradiol (injection) matches the 1:2 ratio. (Kuhl)

That being said, there is no proven pharmacological benefit to mimicking nature better in this specific case, it’s merely worthy of note.

How Much  More Effective is Sublingual Estrogen?

One very good study (Price) compared the peak and average estradiol in the bloodstream from taking estradiol pills either orally or sublingually. Six women took a variety of doses of estradiol via both methods, and their blood serum estradiol levels were measured at 0, 1, 2, 3, 4, 6, 8, 12, and 24 hours after they took their dose. The results were plotted, and startling. See the following graph for a good comparison. 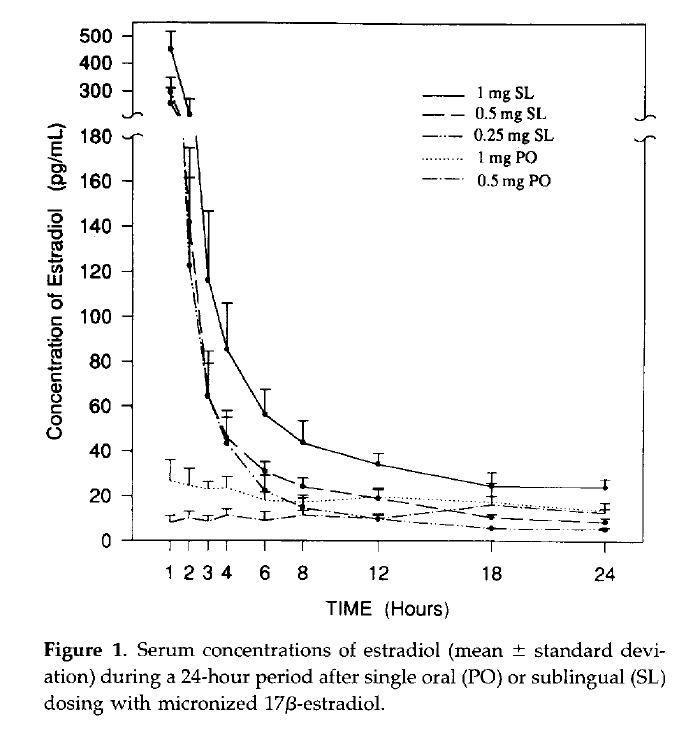 First, note that the three lines which portray a huge spike in estradiol are all from taking estradiol sublingually. Second, note that not only is the peak so much higher, the long-term average value of serum estradiol is significantly higher. The two flatter lines representing the “swallowing” case are very unimpressive overall.

Looking at the area under the curve, we can try to compare the total dose of estradiol which is received by the woman taking the pill. Assuming the 1-mg dose is taken, then in the case of oral administration the product of time and estradiol level is approximately 480 pg/ml*hr. Calculating the area under the sublingual curve is more difficult. I plotted points from the sublingual estradiol curve, and came up with an estimate of the estradiol function from 1 hr to 24 hours as being 350.54*(HOURS^-0.907). From 0 to 1 hours, I estimated the estradiol level linearly, as 451*HOURS. The area under the curve from 0 to 1 hour is therefore 225.5 pg/ml*hr. To find the area under the more complicated curve from 1 to 24 hours, I used a little calculus and integrated, and ended up with a value of 1,296 pg/ml*hr. Summing the two values gives a result of 1,521.5 pg/ml*hr.

For those keeping score, the total estradiol absorbed by your body when taking the same pill sublingually as opposed to orally is about 3.2 times the dose received when taking oral estradiol.

Now let me call your attention to the shape of the sublingual estradiol curve. Notice the dramatic peak which occurs over the first 4 hours, followed by a severe drop-off by the 5th or 6th hour after taking the pill. This raises the question – is it better to take all of your dose at once, or spread it out over the day? I decided to run some calculations on two dose strategies, based on the dose-response curve gathered in this technical paper.

Case 1: a woman takes three 2-mg estradiol tablets all at once.

Case 2: a woman takes one 2-mg estradiol tablet every 8 hours.

I ran my calculations for each hour, and developed a graph which illustrates the expected level of estradiol in her body for both cases. 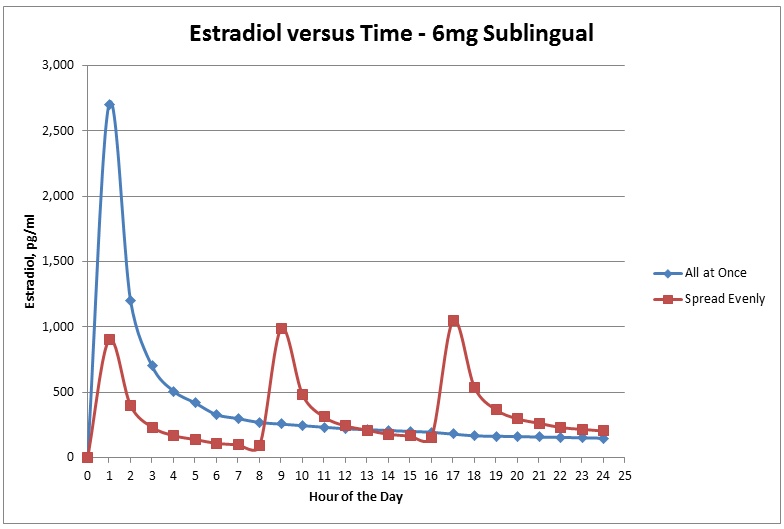 This graph is actually a little deceptive to the eye. While it may look better overall to spread your pills evenly over the day, the mean value of estradiol through the day is actually 396 pg/ml for the “all at once” case, and 322 pg/ml for the “spread out” case. That having been said, many references claim that our bodies have no ability to deal with circulating estradiol levels of more than 800-1,000 pg/ml. In other words, all that estradiol over that limit is wasted. So I generated another graph, assuming conservatively that anything over 1,000 pg/ml was wasted. 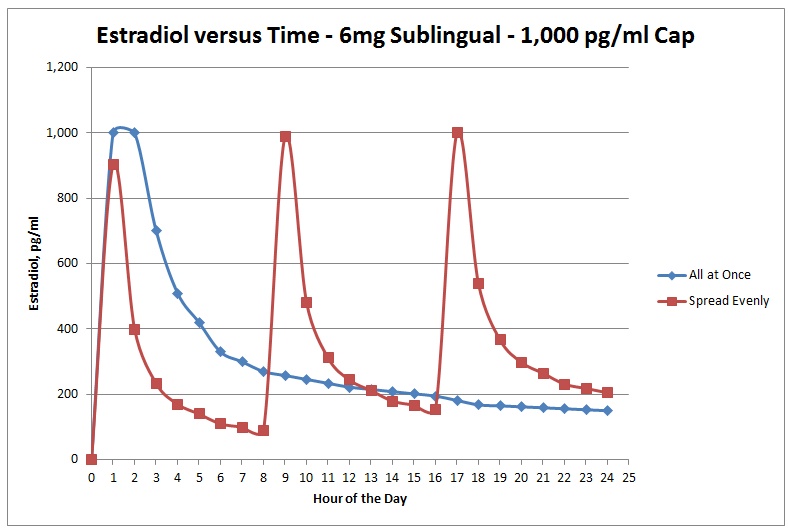 In this case, the mean value of estradiol through the day is 304 pg/ml for the “all at once” case, and 320 pg/ml for the “spread out” case. It’s debatable whether this is statistically significant.

On the other hand, there is a practical consideration at play. When one takes sublingual estradiol, the ideal method is to keep it under your tongue as long as possible, making sure you taste as little as possible. The mantra some transwomen use is “you taste it, you waste it.” This is not difficult to do with a single pill – I can sometimes keep a single pill dissolving over 30 minutes. When you have 3 or 4 2-mg pills in your mouth at once, you tend to swallow more, which would reduce the effectiveness of the dose, thus tipping the scales even more towards the “spread out” case.

It’s entirely possible there are other pharmacokinetics involved which are not addressed directly which would favor one method of dosing over the other, but it’s not immediately apparent to me.

Validation of the Theory – A Sample Size of One

I have excellent health insurance, and two different endocrinologists, each of which have tested my estradiol levels to track the progress of my transition. Each of them provides the option to choose my lab time prior to my appointment, so right from the start I decided to track how long before the labs I would take a 2 mg estradiol tablet sublingually. I’ve done this 10 times in a row, over a period of 2 years, and recorded the time at which blood was drawn and the time when I took my last pill.

The results of these tests are plotted below versus a “predicted” value. I was actually quite impressed with the close visual agreement between the predicted curve (red) and my real-world results (red). However, I must emphasize that many changes happened over that two-year time period, and thus it’s certain that there is experimental bias involved in this process. In addition, as the title of this section reminds, I am a sample size of one, and my results are no indicative of anyone else’s potential results. Finally, note that the two lines do not agree as closely as it appears – due to the large scale on the Y-axis, significant differences between the predicted and real-world results exist at most points.

What About Dissolving in Your Cheek?

Dissolving pills between your cheek and gum (called “buccal” administration) is often touted as being equivalent to sublingual administration. However, a direct comparison between the two does not appear to exist in the scientific literature which is available. (Kuhl)

6 thoughts on “Sublingual versus Oral Estrogen”