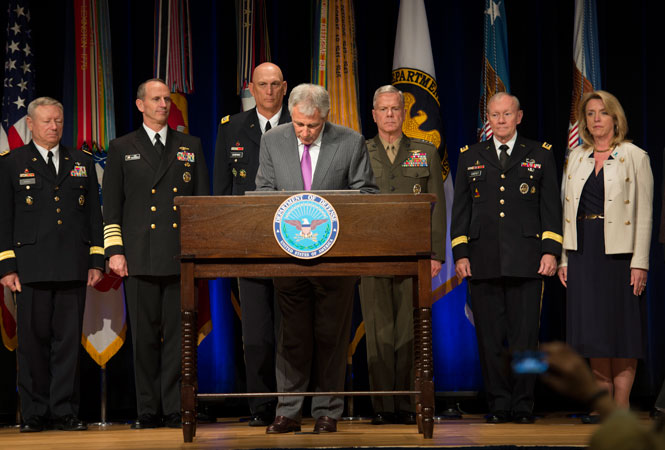 This is a disappointment for our community, yes, but the practical impact is actually highly limited and not as bad as some bloggers are claiming. Why do I say this?

In fact, in a more detailed look at this topic at the Washington Blade, there is some more encouraging information given in the form of some official quotes:

But there is no reference to gender identity. Transgender people are barred from service in the military because of medical regulations, despite growing efforts among LGBT advocates to push for openly transgender service.

Lt. Cmdr. Nathan Christensen, a Pentagon spokesperson, said “gender identity” wasn’t included in the section for civilian workers because it would fall under the category of “sex” in the charter.

“The Department did not specifically list ‘gender identity’ in the civilian equal employment opportunity section of the Human Goals document because discrimination against a transgender individual could be covered as a form of prohibited ‘sex discrimination,’ which is listed in the charter,” Christensen said.

Regarding the absence of “gender identity” from the military service portion of the document, Christensen said “there are no plans to change” to change the policy on transgender service.

“The Department considers that service members must serve in austere environments, many of which make necessary and ongoing treatments related to sex reassignment and many other conditions untenable,” Christensen said. “Policies on military personnel and health care regarding transgender members are intended to meet the needs of the services, which include the ability to deploy to and serve in austere environments with limited (and perhaps no) access to medical care for prolonged periods on little or no notice.”

While many may believe that this medical justification is merely thinly-veneered bigotry, remember that it wasn’t that long ago that we were excluded on the basis that we were “guilty of moral turpitude,” “disruptive to troop morale,” or even “mentally ill,” as opposed to having medical needs.

In short, this is a disappointment but it’s not really a snub and it’s not a step backwards for us, merely a missed step forward.