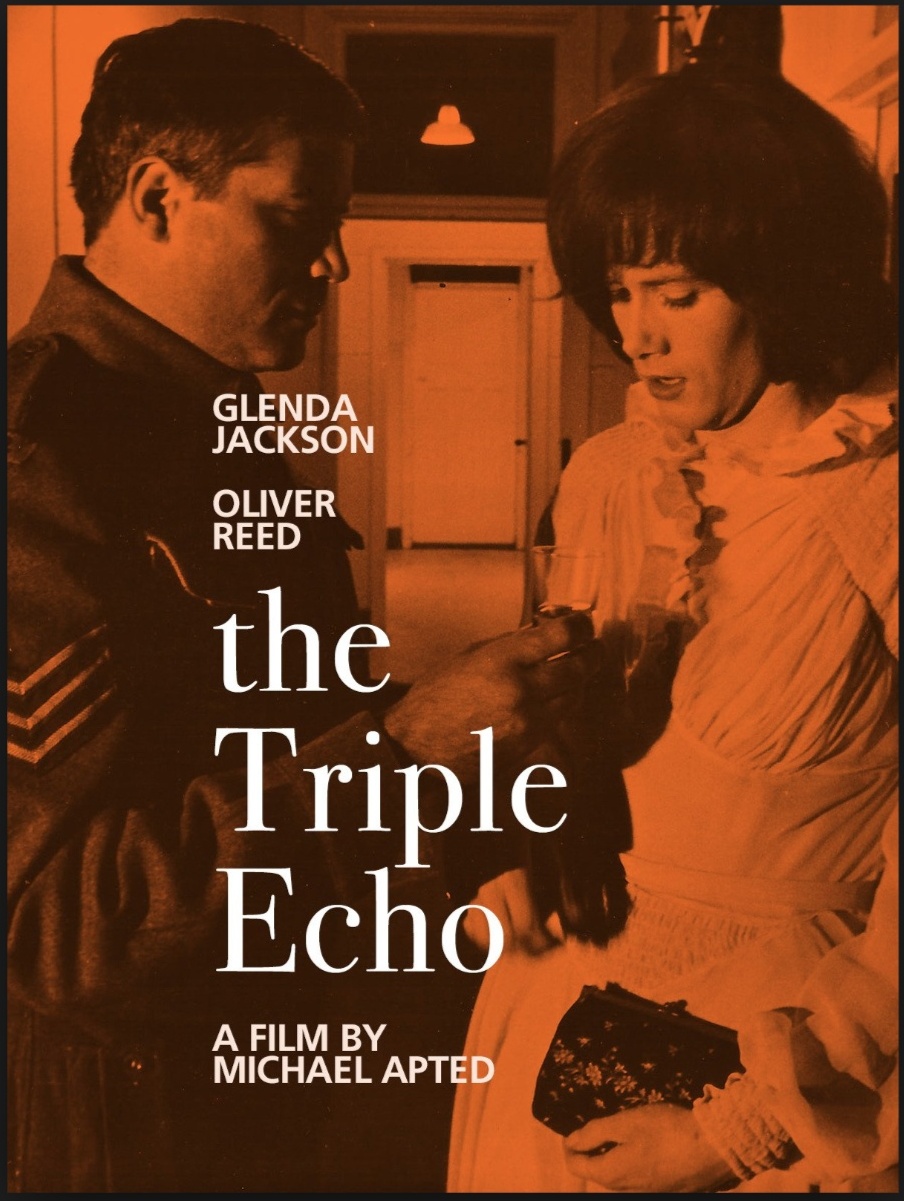 On its face, The Triple Echo could be seen as a straightforward WW2 drama involving a crossdressing soldier who is attempting to escape the horrors of service. However, after viewing it twice I have come to the conclusion that the film touches on more than mere situational crossdressing or forced feminization, but actually includes a portrayal of gender transition from two standpoints – that of the soldier, and of his lover.

The film (also known as Soldier in Skirts in its U.S. release) is a 1972 British drama film directed by Michael Apted, and based upon a 1970 novella by H.E. Bates. The story was one of the last ones written by Bates, and reportedly he said it was one of the most difficult ones he published throughout his long career. The story takes place in a hidden rural farm in the English countryside in World War II. Alice (portrayed by Glenda Jackson) is a farmer’s wife, doing her best to tend her large farm alone while her husband languishes in a Japanese P.O.W. camp. The name “The Triple Echo” comes from the fact that the hills surrounding the farm produce a triple echo each time Alice shoots game or rodents on the property. A young soldier, Barton (portrayed by Brian Deacon), wanders onto her property one day from a nearby army base, and the two strike up an unlikely friendship as he stops by on every leave, quickly becoming lovers. 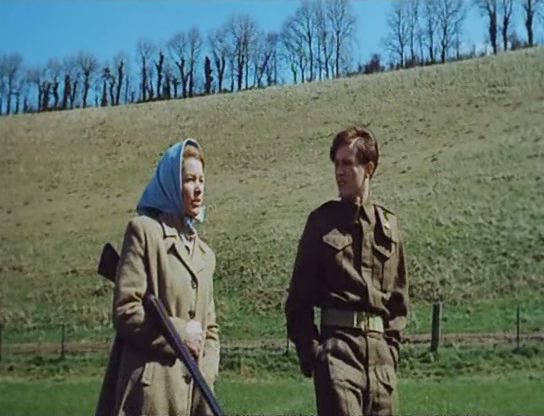 As their relationship deepens further Barton decides to desert the Army, and Alice, hesitant at first, soon readily agrees to hide him on the farm.

Alice comes up with the possibility of disguising Barton as her sister, Jill. Barton violently opposes it at first, but Alice remains steadfast in her belief that this is the only way to safely hide her lover. Barton reluctantly submits, growing out his hair, wearing Alice’s clothing with a padded bra, and then going so far as to do his nails and apply makeup on a regular basis. Here is where we start to see the first indications that Barton is adapting more than the minimum amount to his new gender presentation. 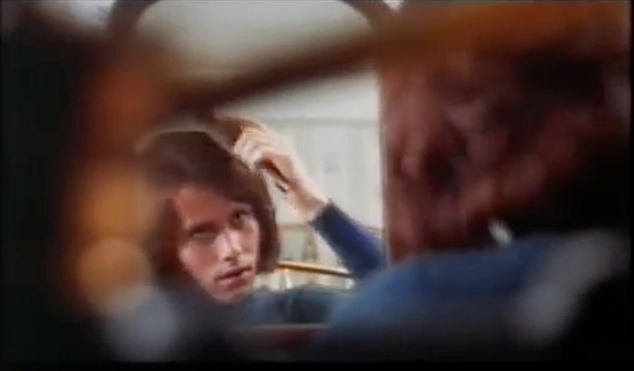 One day two soldiers from the Army base accidentally drive a tank onto the property. While they look around and ask for directions, the tank sergeant (portrayed by Oliver Reed), develops an immediate leering lust for both women on the farm, but especially for the quiet, demure Jill. Reed’s performance as the sergeant is actually somewhat scary – he continues to visit the farm unannounced, barging into Alice’s house and helping himself to food and drink, all the time leering and making sexual innuendo towards both Alice and Jill. Jill slips and introduces herself as Cathy, wherein follows a very telling argument with Alice where Jill (henceforth Cathy) asserts that she should have the ability to choose a name that suits her.

As the sergeant’s depredations continue, the relationship between Alice and Cathy becomes steadily worse. They stop having sex, and then stop showing any affection other than that one would expect from sisters living together. They argue and fight constantly, with Alice trying desperately to convince the sergeant to leave them alone, with Cathy starting to seem intrigued. Cathy chafes over being hidden away every time the sergeant or other soldiers stop by, and she starts to bemoan being trapped inside during the holidays. 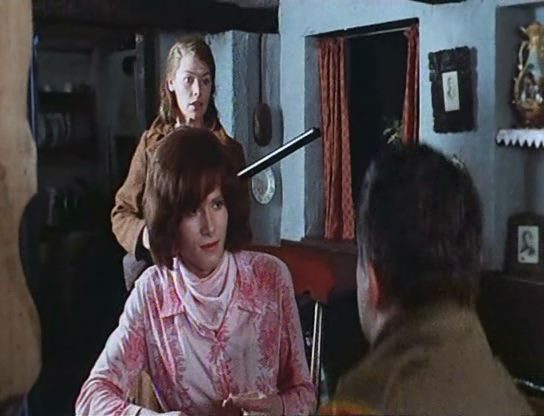 When the sergeant invades their home again and insists the women go to a Christmas dance party on the base, Alice angrily refuses, while Cathy assents. Alice and Cathy fight over Cathy’s attending, but when Alice goes upstairs and sees Cathy putting on stockings and an underslip, with a care and attention that seems incredibly feminine, you can see something change in Alice’s eyes and posture – as if in that very moment, you can see that she has finally accepted that Barton no longer exists, and there is only Cathy. And when Cathy descends the stairs to meet the lecherous sergeant, you can see in her face that Barton is no more. 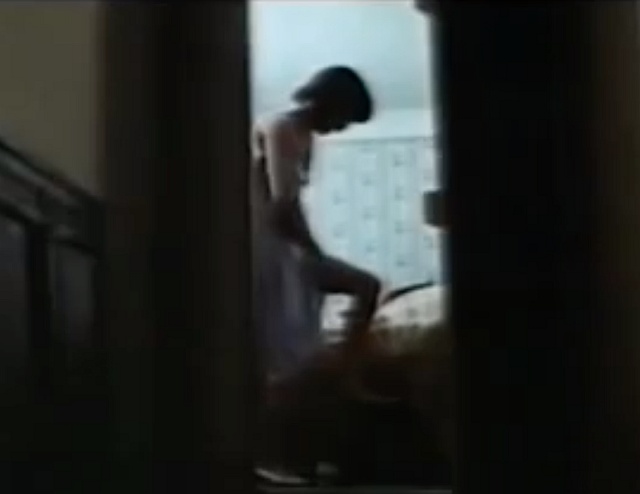 The sergeant takes Cathy to the party, and immediately very aggressively tries to put moves on her on the dance floor, and goes so far as to follow her to the ladies room and stand directly outside, making sure Cathy can’t escape. She tries to escape through a window but it’s sealed, and thus with obvious fear, she resigns herself to spending time with the sergeant. 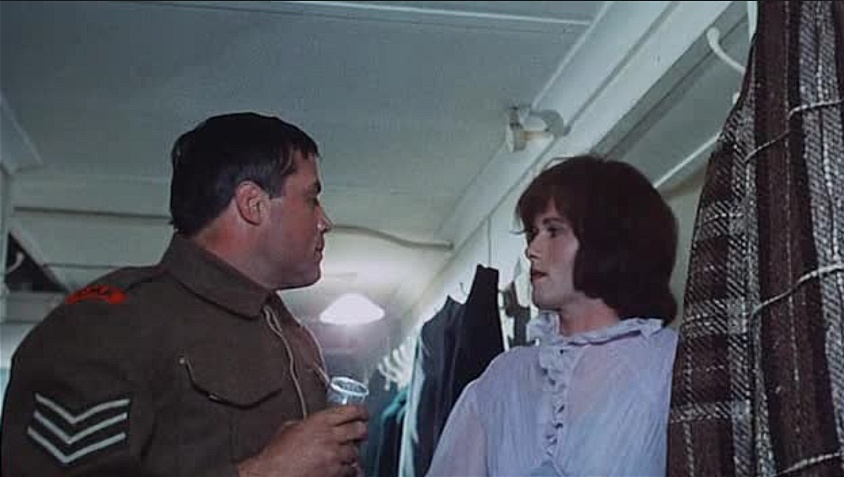 The sergeant takes Cathy into a file room where another solider is having sex with a girl from the party, bars the door with a cabinet, and proceeds to attempt to rape Cathy. At some point while groping her, there is this shock that appears on the sergeant’s face – the film doesn’t show it, but it’s very heavily implied he found Cathy’s genitals. Cathy attacks the sergeant and escapes the base, fleeing on foot in her party dress and heels cross-country to find Alice’s farm again.

The next morning Alice tenderly tries to clean and dress numerous lacerations on Cathy, and prepares her to escape through the woods, as they’re certain that the soldiers will come straight to the farm for her. And they do, surrounding the farm and easily catching Cathy as she flees through the woods. She is thrown down a hill, kicked, beaten, and dragged up to the house in her bedraggled and muddy clothing. As they enter the gate to the front garden, Alice goes upstairs to the bedroom window with her double-barreled shotgun, and shoots Cathy in the chest, killing her instantly. The film ends with the characteristic triple echo of the report.

As I noted earlier, there is clearly more at play in the film than forced feminization. The reaction of Alice as Barton fully takes on the female gender presentation and then role shows that she now views them as a woman. Barton’s attention to detail in personal appearance and dress, far more than a farm woman would bother to do, as well as the longing to go to a Christmas dance with the sergeant, speak strongly to a full acceptance – or understanding – of a gender identity. Even as Cathy is terrified at the dance, it’s clear that the main reason she’s terrified is not because of her gender role per se, but more because the sergeant is really a very terrible person. Oliver Reed plays the role with incredible skill, creating a person who reeks sexual menace in every single scene.

Bates is quoted as saying that the novella took 25 years to write, and that he originally portrayed the work with two sisters running the farm, into whose life Barton wanders. It was only after removing one of the sisters that he was suddenly able to finish the novel. One has to wonder how the story would have turned out with two sisters on the farm – Barton as Cathy might not have had the torrid romance with Alice, and the sergeant might have been less threatening. Would that have removed some of the motivation of Barton to dress and become Cathy, thus emphasizing the potential transgender subplot? We’ll never know, unless some rare soul somewhere decides to write H.E. Bates fan fiction.