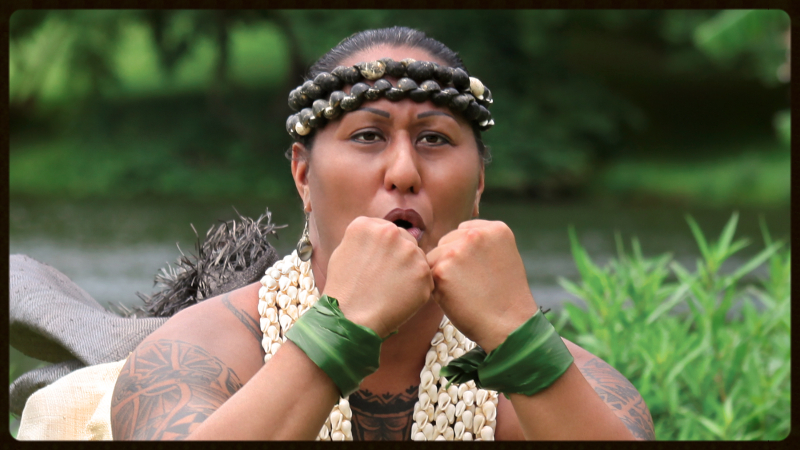 Kumu Hina is a documentary film about the life of Hinaleimoana Wong-Kalu (Hina), a teacher of the traditional dance of Hawaii and a transgender woman. The film focuses overtly upon four aspects of Hina’s life: her attempt to teach a group of male students at Hālau Lokahi Public Charter School how to perform traditional Hawaiian dance, her mentoring of a transgender boy (Hoonani Kamai) who is attempting to join the male group, her work as the chair of the Oahu Island Burial Council, and Hina’s relationship and marriage to her Fijian husband, Hema.

But there is a continual subtext of a fifth aspect to Hina, which is the story of the traditional transgender people of Hawaii and the Pacific Islands, who are called māhū*. The māhū have been a respected part of Hawaiian culture since antiquity, and were noted as existing by the first Europeans who visited the islands. However, with the influx of European Christianity and its missionaries, several attempts were made over time to demonize and criminalize the māhū out of existence. For Hina, teaching the language, the dance, and working with the young transgender boy is part of her work to preserve the māhū culture. 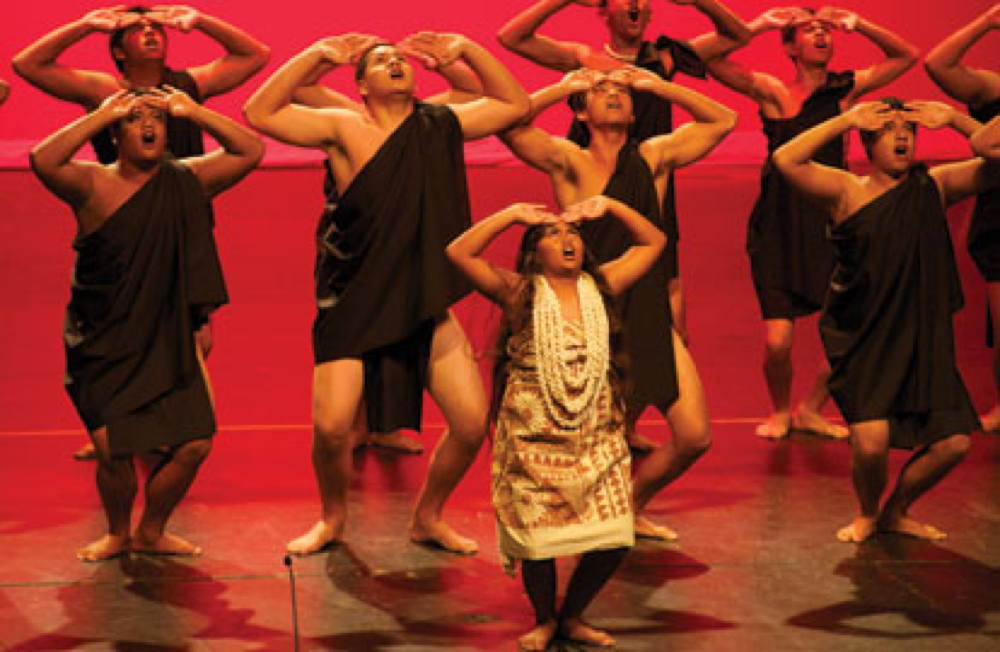 Hina also teaches the girls hula, but the film focuses on her attempts to teach the boys to represent masculine energy and the male dance. At one point, Hina tells the boys that they have to find their male energy, their kane (Hawaiian for man or husband) for a chant, and she demonstrates the voice for that – and the resonance shakes the room. She says of herself that there is nothing in there of the wahini (Hawaiian for woman or wife). She briefly tells them then that they are old enough now to understand her story and her journey, not mock like the younger children, and tells them her story.

Hina’s work with the dance troupe is an exercise in patience, and she tries valiantly to convey the movements, poise, and spirituality of the dance to them. At one point the principal of the school has to step in to castigate the troupe due to their lack of discipline. She has each of them act as leader of the troupe to allow them the experience and insight of leading, but few of them seem to take it seriously. At one point she tells the troupe that they need more male energy (ku) and that this middle child, this transgender boy, has more male energy in her than any of them, and that if that should still be the case by the time of the performance, they should be ashamed of themselves. Despite that, Hoonani Kamai is the leader of the male dance and the males have accepted her as one of them, and better than them. Hina is successful in the end, and the troupe performs nearly flawlessly at their end-of-term event. 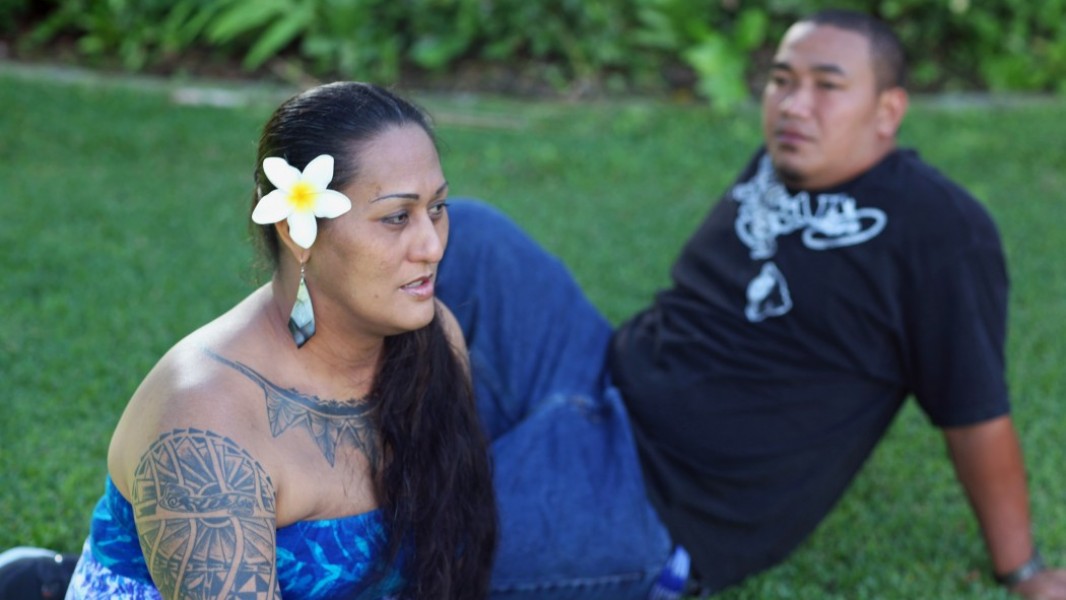 Hina’s husband Hema is a trial for Hina in some ways. Clearly he has a good heart, for he fell in love with Hina and married her, despite a long-standing Tongan (his nationality) and Fijian (where she meets him to bring him back with her to Hawaii) prejudice against māhū. Hema seems somewhat overwhelmed by married life in a new country, and often retires to watching soccer, laying around the house, and hanging out with his friends at kava-drinking parties. There is pain and resignation, or perhaps even a tiny bit of resentment, shown in Hina’s face as she does laundry, prepares dinner, and picks up after her husband. But throughout the film it’s clear they do love each other. Fiona wondered if, due to his culture, he would have treated her just as badly if he thought of her as a natural woman, or perhaps even worse. One hard adjustment for him was that he has chosen to become responsible for the support of his family back home, even though he wasn’t before he left, so much of his money from a new job as a security guard goes back there, leaving him feeling trapped. One thing that seemed to greatly help their relationship was when Hina took him on a road trip to visit the māhū community that was a source of support to her so that he could understand her better. 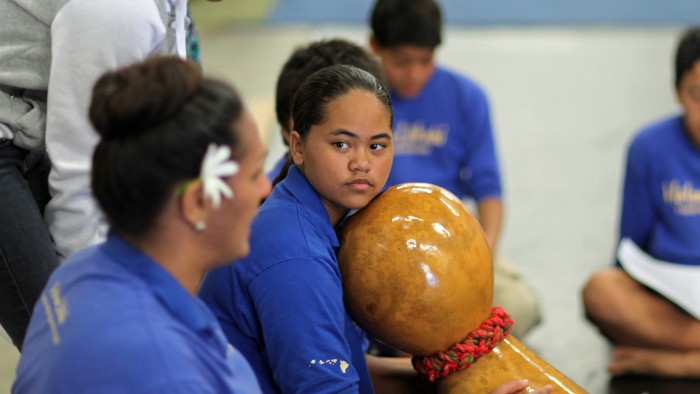 Hina’s relationship mentoring the transgender boy is a bit unusual. Although she does everything possible to integrate the child into the boy’s troupe, at the end of the film, just before the big performance, she has a heart-to-heart with the child and tells her she will have to wear female dress. She tells her that while she is at this school she is accepted and can present as male, but when she is older and elsewhere, she may be forced to be with the girls and to be a girl. Then she goes on to say that “when you are my age you can do what you want” – which is horrifying to consider when you are a child Hoonani Kamai’s age. We were both torn over this – the entire film was about Hina being true to herself and her culture, yet at the same time she has to refuse to allow a transgender boy to dress as his gender. There doesn’t even seem to be any reason for this – although the boy’s mother refuses to fully accept his transgender identity, she also doesn’t seem overly controlling or militant about it either. She does say to Hoonani Kamai that it’s ok to stand with the boys and do what the boys do, but “you must always remember that you are a girl.” It’s possible that some parent-child discussion and feelings were not portrayed in the film, for the sake of privacy. It’s also possible that her child is truly in the middle, genderfluid, we do not know enough to judge this.

We viewed the film at the Tivoli Theatre in Kansas City, as part of a special Community Cinema event sponsored by KCPT-19, and featuring a discussion panel including Transas City founders Una and Fiona Nowling, Transgender Institute founder Caroline Gibbs, Transgender Counselor Emily Foltz, a representative from the transmen community, and Lindsey Foat, a reporter for KCPT and The Hale Center for Journalism. Lindsey moderated a discussion of the film and a question and answer session from the audience, and it was a positive event and learning opportunity for all of us.

Both Fiona and I give the film two thumbs up.

* Please note that use of the term māhū should be done with care, as its meaning is complicated. It generally refers to “third gender” persons who may not necessarily consider themselves “transgender”. It has also been used as a slur in recent times, along the lines of “tranny,” although this is not universal. In several instances in the film Hina refers to herself as māhū and transgender, so I feel I can use it here with caution.