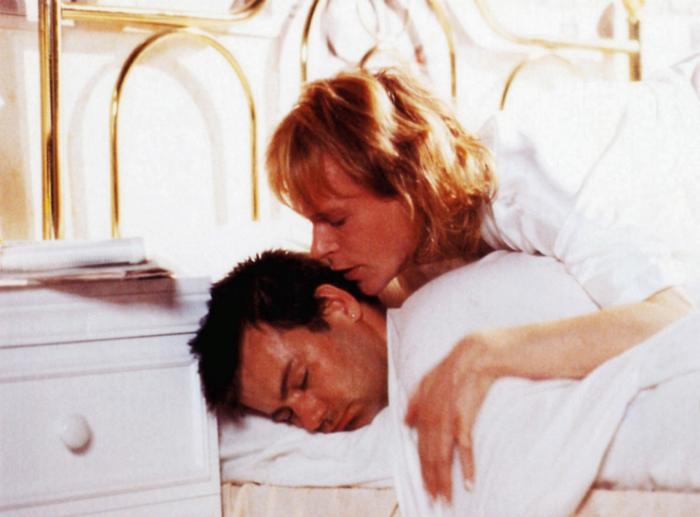 Different for Girls is a surprisingly sensitive and well-produced film which stands out as a “must have” in any trans film collection. The story in general is a love story between Kim, a post-op transwoman who works at a greeting card company, and Paul, a ne’er-do-well motorcycle messenger. The film begins in high school, where Kim is shown being attacked for being effeminate and doing something many transwomen have done in the shower – showering with her genitals tucked away to feel more female. Paul jumps in and defends her from the beating, and then we flash forward.

A chance meeting between Kim’s taxi and Paul’s motorcycle results in the two of them connecting after several years, and Paul is understandably flummoxed by finding out his old friend is now an attractive woman. The two of them decide to start seeing each other as friends, and as the relationship develops it turns into love, which causes havoc in both Kim’s and Paul’s lives.

An incident where a drunk Paul freaks out leads to both Kim’s and his arrest, and when a police officer tries to sexually assault Kim Paul steps in to stop it, receiving a beating and criminal charges as a result. Kim is exposed for being a transwoman, and threatened by the police with being put in a male jail cell if she doesn’t “play ball” with them and not support Paul’s accusations against the police. And from that point, emotions run high and things get complicated and scary.

I’ll avoid spoilers at this point and just say that the remainder of the film is very well done, and features a somewhat believable ending (honestly, I know how much people are paid for news scoops, seeing as I work for a newspaper, and it’s not very much at all). The acting in the film is superb – Steven Mackintosh does a wonderful job of portraying the timidness and fear which rules Kim, especially when she is being leaned on by the police. I confess that my heart started to pound a bit during the scene where she’s threatened with being placed with male prisoners. Kim’s epiphany at the end is well-acted, and all of the supporting cast do a great job. Paul’s character seems a little too one-dimensional at times, but realistic at the same time. There is a sex scene which is also tasteful, realistic, and sensitive.

There’s really a lot to like about this film. I watched this film with my wife and two trans friends, and we unanimously gave it “thumbs up,” and I urge you to put it on your “must see” list.