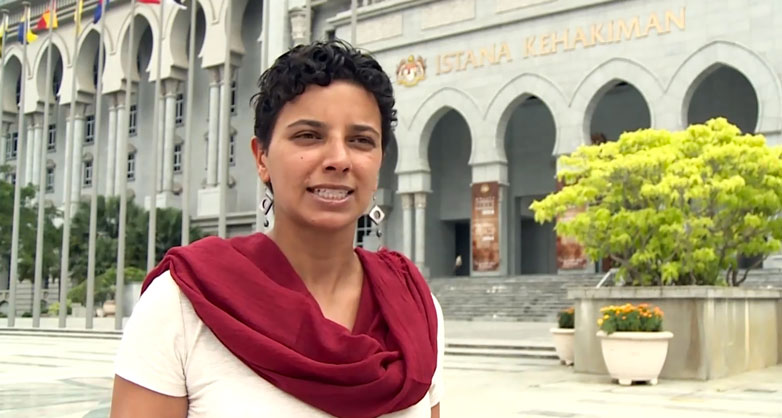 Many of us have noticed as transgender human rights have been increasing worldwide that there has been conservative Christian backlash – but it’s nothing compared to the Muslim backlash.

Malaysia for some time has seen a growing Muslim presence and application of Sharia law in place of secular law, and appears to be following the lead of its neighbor, Indonesia. While many groups have suffered under Sharia law, no group has suffered more than the LGBT communities of those countries.

On June 9, 2014, a Sharia court in Malaysia’s Negeri Sembilan state sentenced the 16 women in a hearing in which they had no access to a lawyer. State religious department officials arrested the women, along with one transgender child, at a wedding party in a private home on the night of June 8 and 9 under the state’s Sharia law, which criminalizes “a male person posing as a woman.” All pleaded guilty, except the child, who was released.

The religious department officials had infiltrated the wedding party and arrested the transwomen, several of whom were wedding planners, known locally as mak andam, while others were invited guests at the wedding. The officials beat one of the women – choking her and kicking her – and tore another woman’s clothing in the course of the arrest, according to Justice for Sisters, a Malaysian transgender rights group. After they were sentenced on June 9, because they are legally considered “men,” they were transferred to the male ward of Sungai Udong prison. There, prison authorities forcibly shaved their heads in what the women said was an effort to negate their gender identity.

On June 11, a defense lawyer filed a request to have the women’s sentences re-evaluated and to secure their release on bail. According to Justice for Sisters activists at the hearing, the judge’s actions appeared to reflect considerable personal bias in the case. The judge asked the accused, “Wouldn’t it be better if [you] are in prison?” He told them that their shaved heads made them “handsome.” He set bail conditions that were impossible for many of the women to meet, including that their parents – some of whom lived in distant states or were ill – physically come to court within 30 minutes to bail them out. The women served five days of their sentence before prison officials released them early on June 13 since their release date fell on a weekend.