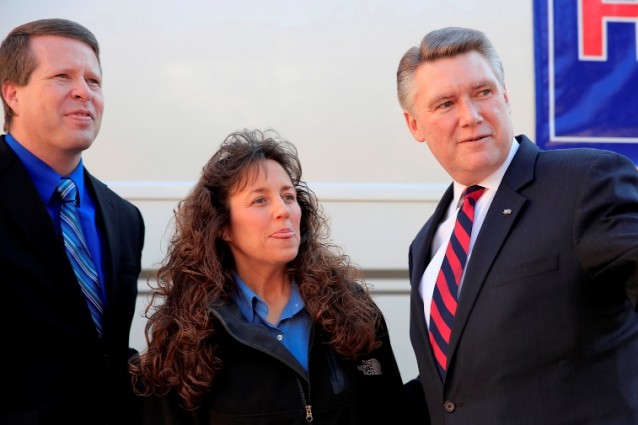 I’m not even sure how a person picks someone like Michelle Duggar to be one of their spokespeople. I mean, we already know from her reality show that she’s a seriously messed-up religous zealot, forcing her girls to only wear skirts and to have their hair long, let alone the fact she’s somehow given birth to 19 children out of wanting to have her own Biblical-ordained “quiver full.”

So of course we would expect she would be amenable to slurring transgender people, apparently since she has put no actual thought into the true meaning of her Bible. Something which I’ve covered at length here on Transas City. Therefore, Duggar has been recorded for a political robocall, which is speaking out against a proposed non-discrimination ordinance for Fayetteville, Arkansas, such as the one we recently campaigned in favor of in Roeland Park.

In a new robocall obtained by the Fayetteville Flyer, Duggar claims that the bill will “allow men — yes I said men — to use womens’ and girls’ restrooms, locker rooms, showers, sleeping areas and other areas that are designated for females only.” She goes onto describe “males with past child predator convictions that claim they are female” who would enter these private areas.

Duggar also suggests that gender identity is the “preference of an adult” and that should never be placed over “the safety and innocence of a child.”

Mercifully, it turns out her effort failed, because by a 6-2 vote the Fayetteville nondiscrimination ordinance passed.

What this episode has been useful for is revealing yet another television “celebrity bigot” to keep our collective eyes on.