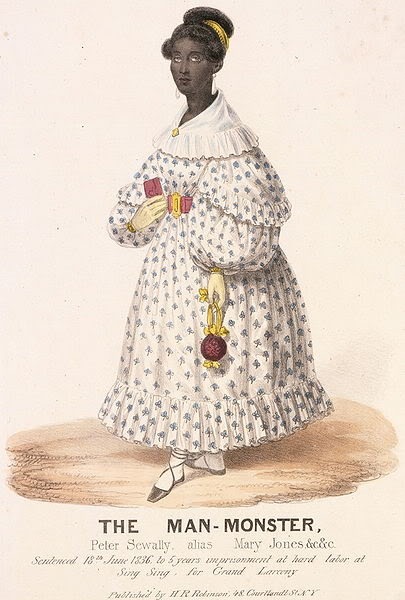 The story of Mary Jones is one of the earliest of a transgender person in American history, although whether she was a gay crossdresser or a transsexual woman is not known. Born as a male named Peter Sewally, and a resident of New York City in the 1830’s, Mary went to trial on 11 June, 1836 for pick-pocketing a wallet containing $99 from a white john she had slept with the prior night. During her arrest Mary attempted to dispose of two additional wallets hidden in her clothes by her breasts, and when the police took Mary’s key and entered her home they found dozens more wallets, watches and trinkets. Most of them belonging to the city’s male upper class who, although knowing Mary had stolen from them, had become fearful to report the losses to the police –  lest their vices be known to an increasingly morally conservative public.

Upon Mary’s interrogation and strip search it was discovered she had male anatomy, and had created a leather device in the shape and form of a vagina tied around their waist to keep clients from learning Mary’s birth sex. At her trial Mary testified:

“I have been in the practice of waiting upon Girls of ill fame and made up their Beds and received the Company at the door and received the money for Rooms &c and they induced me to dress in Women’s Clothes, saying I looked so much better in them and I have always attended parties among the people of my own Colour dressed in this way — and in New Orleans I always dressed in this way”

It should be no surprise to anyone that in 1836 an effeminate “homosexual” prostitute of color accused of thievery stood no chance of being found innocent. It was the summer of 1836, just recently after anti-abolitionist and anti-amalgamationist riots in New York City, and as she was led to the courtroom she was surrounded by a loud and disorderly mob which accosted and prodded her. She was convicted of grand larceny and imprisoned for five years. Her trial was sensationalized and she was humiliated and her image publicized as “the Man Monster.” Although according to Nyong’o (q.v.) the use of the term “monster” referred much more to the fact that Jones was black and her clients white, rather than having to do with her apparent sex (I believe there is some disagreement on this point, however.)

After her release Mary was convicted again and sent to Sing-Sing prison for five months for simply crossdressing. After release she disappeared from recorded history.