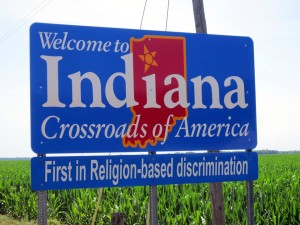 “We hold these truths to be self-evident, that all men are created equal, that they are endowed by their Creator with certain unalienable Rights, that among these are Life, Liberty and the pursuit of Happiness.” – excerpt from The Declaration of Independence

Matthew 23:4
“Yea, they bind heavy burdens and grievous to be borne, and lay them on men’s shoulders; but they themselves will not move them with their finger.”

How does one voice an opinion on a subject that causes one’s blood to boil? An issue that causes such anger that it makes a compassionate person double up their hands into fists and say enough is enough? Well if you’re me, you sit down and write about it. Then you do something about it.

I am not alone in my anger. With Governor Mike Pence’s signing of the Religious Freedom Restoration Act (RFRA) in Indiana this past week, we have seen a backlash across our country of biblical proportions. Indiana faces a massive loss in revenue, from such companies as Salesforce and Angie’s List, to Apple & Eli Lilly. Cities like San Francisco and Seattle have restricted official travel to Indiana, and the State of Connecticut has officially joined them. Indiana itself has seen massive protests, and some Hoosiers have even quit their state-sponsored jobs. Even some mainline Christian denominations have become involved in the backlash – both Presbyterians and the Disciples of Christ have said that they will look elsewhere for their convention needs, and both groups have condemned this new law.

I applaud all who have stood up to this form of legal bigotry. Other states and their Governors would do well to pay attention to what is happening in Indiana. So what is this really all about, you ask? Is this a spiteful backlash on Marriage Equality, and about laying the groundwork for the future? In this writer’s opinion, Republicans have a long-term plan to supplant this great nation as a whole and replace it with a Fundamentalist Conservative Theocracy. One in which their version of Christianity is the State religion, comparable in scope to Sharia law in the Muslim world. It is not a popular or widely held opinion, but it is what I perceive as the ultimate goal of such laws. You of course are free to draw your own conclusions.

On Sunday the Governor of Indiana, Mike Pence, was asked several straightforward questions. The Governor quibbled, diffused, deflected and obfuscated his way through the interview and would never answer a simple question about the rights of people in his state to discriminate. Even today he is unwilling to speak about it. Watch the interview here.

Today a letter was sent to Governor Pence from the Indiana business community demanding swift action to fix this issue, you can read the letter here. Corporate Business Letter

These laws exist in 19 states, including Kansas and in Missouri a law is being considered and has been written, and there is a federal RFRA law on the books. Passed with overwhelming bipartisan support and signed into law by Bill Clinton. It is important to state that if you are a person like me who opposes such legislation in one of these or another state, then do your duty and call or e-mail your representative and politely voice your displeasure towards any bill that discriminates, or otherwise impedes another’s basic civil and human rights. This is our government and we choose how it works, we elect people to protect our interests and preserve our rights, not remove them and entrench themselves in power at our expense.

Kansas Law: HB 2203 as enrolled (law as of July 1, 2013 RFRA-Kansas
Missouri Law: There is no law currently on the books or in the legislative agenda that i could locate at this time. This is a link to the proposed language of the bill. RFRA-Missouri

In Missouri there are currently two bills on the floor of the House. State Rep. Jeff Pogue (R-Salem) filed the legislation which opponents call “harmful” “demeaning” and an instrument to “create false fear” of the transgender community. One bill (HB 1338) would require all public restrooms, other than single occupancy restrooms, to be gender-divided restrooms. HB-1338 The other (HB 1339) would prohibit the appropriation or expenditure of state revenues for the purpose of creating a gender-neutral environment, unless required by a federal or state court order. HB-1339

In Kansas there is currently one such bill on the House floor. Sponsored by Sen. Steve Fitzgerald (R-Leavenworth), (SB 175) prohibits the state’s universities from taking action against student religious groups that require members to adhere to the group’s religious beliefs. The bill passed 30-8, and it now goes to the House. Read more here: SB-175 Wichita Eagle, and read the bill yourself here. SB-175

Here is a link to a pdf dated June 2013 covering the law in both states, published by the ACLU. This has not been updated as of yet, but makes interesting reading. ACLU PDF

I look forward to reading your comments on this issue. Cassandra Frost