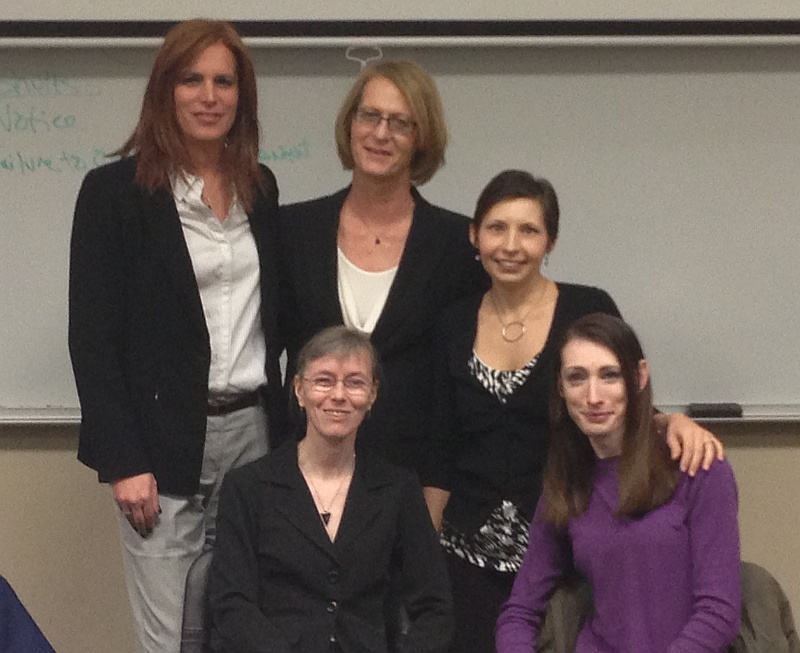 On the 26 March, a group of people came together to attend a session of a law course at the University of Kansas (KU).  The course is  the “Lesbian, Gay, Bisexual, Transgender and Questioning (LGBTQ) Seminar” and it is a new course this year, created by David Brown.  David reached out to a friend in the Trans community, Julie, because many people know LGB people but not many know trans people – or know that they do as so many are stealth.

Julie asked her friends to help and a group of people responded, some trans, and some related to them – Madeline and Rachael, fully out transwomen, Amanda in the “Middle Ground”, Debi, the mother of a transdaughter, and Fiona, married to a transwoman.

We met at the law school and attended the first hour of the session, a student led discussion of the relevant topic, where issues such as bathroom usage, whether imprisonment in an opposite gender prison is cruel and unusual punishment, changing legal documents and discrimination by police, prosecutors, juries and judges was discussed.

For the second hour, it switched to a question and answer format, where we introduced ourselves and then the students asked us questions regarding our experience and issues with the law.  Madeline spoke about her life and her law practice and transitioning as a lawyer, and provided citations for the students when the rest of us could only reference cases by story; Amanda spoke of living in the middle ground, and the fear of discrimination caused by the patchwork of anti-discrimination laws that doesn’t cover the whole country. Rachael spoke of the issues affecting immigration and the climate in the UK, Debi spoke of issues affecting parents and schools, various state Family Services and custody of children, and Fiona spoke of issues regarding effective same-sex marriage in Kansas, social security benefits, name changes and the number of documents to change, and the EEOC focus on discrimination against trans people.

After the class ended, there was pizza, which is always a good thing, and many of the students stayed behind to thank us for coming, or to ask additional questions.  It was a really good experience and I would happily attend next year too.

Pizza and after class discussion at KU.