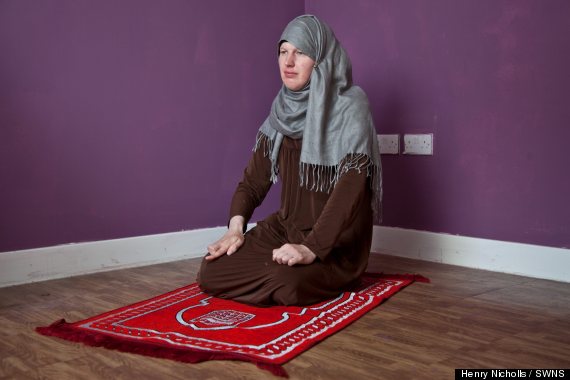 I’m highlighting this story because it’s unusual. Lucy Vallender was a solider in the Territorial Army of the United Kingdom, and decided to both transition and become a Muslim at the same time. However, as I’ve posted before, being a transgender Muslim isn’t nearly as fun as one might think…

“They asked me questions about my bra cup size, asked about my Adam’s apple, about my period and asked to see my birth certificate,” she said, and so returned home to pray there instead. “I hope people will change their attitudes and other people like me will realize they are free to just be themselves.”

Hoping a major organized fundamentalist religious group of any denomination will suddenly slap their hands to their respective heads and say “of course! We should love transgender people now!” is a bit overly hopeful.

What bothers me about the article is this part of it:

She’s found love as well as self-acceptance since her drastic life changes, and is now married to a Muslim man, Murad, whom she met on an online dating site. Though he did not know that she was trans at the time of their wedding, she commented, “he must have suspected it as he’s seen my scars.” She’s only seen him twice since the wedding, but spoke warmly about him, commenting, “I love him, he’s kind and soft spoken.”

What, what, what? You married a Muslim man and didn’t tell him you were a transsexual woman until after the ceremony? Whoa.