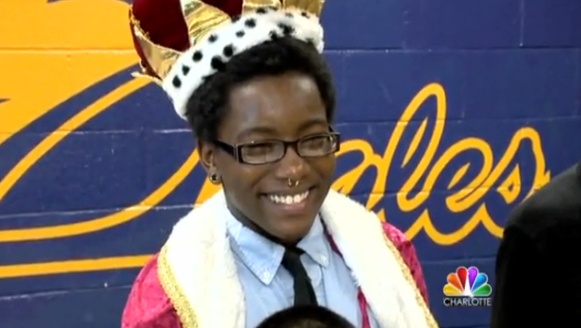 It’s going to be that time of year again, when some schools crown their homecoming “royalty,” and all of them will matriculate students. And as we saw last year this time, the news will possibly be filled with increasing cases of transgender acceptance, and transgender discrimination. The hope of course is that each year we will see more of the former and less of the latter.

In this case East Mecklenburg, North Caroline Senior Blake Brockington was nominated to be homecoming king by his fellow students, and he beat out 13 other contenders to take the crown. Of course East Mecklenburg is reportedly a somewhat unusual high school:

Teacher Bill Allen is the student advisor for the Gay-Straight Alliance on campus.

He says East Meck is known as a school of diversity. He says Brockington’s achievement is the first step in representing what many of the students believe.

“Our young people understand we are all different. We have all races, genders and religious backgrounds. We have kids representing 30-40 languages in this school and people learn to accept each other as they are, and I think this is an example of what is going to be happening in North Carolina,” he said.

As we transgender people are well aware, sympathy or membership with one minority group does not necessarily extend to sympathy with any other minority group. However, the system seems to be working at this high school.