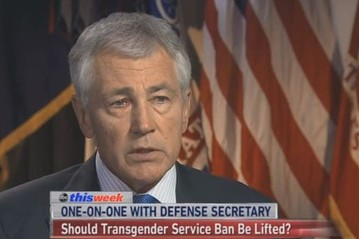 Some further encouraging news for those in the transgender community who wish to serve their country in the nation’s armed forces. Defense Secretary Chuck Hagel says he is open to reviewing the ban on transgender service. More explicitly, he says:

“The issue of transgender is a bit more complicated because it has a medical component to it. These issues require medical attention. Austere locations where we put our men and women in many cases don’t always provide that kind of opportunity … I do think it continually should be reviewed. I’m open to that, by the way. I’m open to those assessments because, again, I go back to the bottom line. Every qualified American who wants to serve our country should have an opportunity if they fit the qualifications and can do it. This is an area that we’ve not defined enough.

If he’s going to do something, he had best do it in the next 2 years. There is at least an even chance that the transgender-friendly Obama Administration will be instead replaced with a transgender-hostile Republican Administration, so getting as much passed and as much set in precedent as possible before such a thing may happen is critical.