The Chevalier d’Eon is a famous enough person that I’m not going to attempt to make any sort of biography about them. Literally scores of books have been published about them, and indeed the Chevalier themself was a prolific author. I myself have several books about their life, spanning thousands of pages in total. So I’ll focus and summarize regarding their connection to transgender topics.

D’Eon was born Charles-Geneviève-Louis-Auguste-André-Timothée d’Éon de Beaumont in France on October 5, 1728, and during their life they were known as diplomat, spy, soldier, and fencing master (or mistress). However, although many facts are known about the Chevalier, many are either not well known, or else there is conflicting information regarding them.

D’Eon claimed that they were raised as a girl until about age 6 or 7, and then continued on as a boy as a condition of their father, Louis d’Éon de Beaumont, being able to inherit from his in-laws. D’Eon was widely reported to be very slender, fine-featured, with a feminine face and with a highly androgynous appearance. Reputedly, this allowed them to be an excellent mimic and able to change their appearance easily, with at least one story being that they spied upon the Empress Elizabeth of Russia by posing as a French lady-in-waiting. D’Eon showed no interest in feminine arts, and pursued military occupations for most of their life. They were known as one of the greatest fencers of all time, and continued fencing (and winning) against much younger opponents into their 70’s.

Questions about D’Eon’s gender existed long before they started dressing as a woman in public. After having been sent to England in 1762, rumors began to swirl about their true gender, and betting on whether they were male or female even made it to the London Stock Exchange. The matter was even more confused when D’Eon tried to return to their home in France, from where they had been exiled by some unfortunate diplomatic intrigues. King Louis XVI allowed them to return to France only under the bizarre and unprecedented condition that D’Eon only dress and appear as a woman. When the King offered money for a new wardrobe of female clothing, D’Eon readily accepted. Reportedly, D’Eon had no trouble at all complying with the terms of the arrangement, even later on when they returned to England and were not under the constraints of Louis XVI’s directive. D’Eon continued to live and dress as a woman for 33 years, until their death on May 21, 1810.

At their death D’Eon was examined by several physicians, who declared that although D’Eon had male organs, they also had other feminine characteristics, including femininely-rounded limbs and significant breast development. There are reports from other sources that D’Eon’s genitals were “ambiguous,” but the majority of reports indicated a feminine, but male body.

The controversy surrounding the Chevalier d’Eon excited the imagination for decades after their death, and their name became associated with transgender persons when English physician Henry Havelock Ellis coined the phrase “eonism” to refer to “transvestites.” He wrote:

On the psychic side, as I view it, the Eonist is embodying, in an extreme degree, the aesthetic attitude of imitation of, and identification with, the admired object. It is normal for a man to identify himself with the woman he loves. The Eonist carries that identification too far, stimulated by a sensitive and feminine element in himself which is associated with a rather defective virile sexuality on what may be a neurotic basis.

Eonism was used as a word to characterize both crossdressers and transgender persons by some in the medical profession for several decades afterwards, rapidly declining in use after Dr. Harry Benjamin and others popularized the word “transsexual” in the mid-1960’s and early 1970’s (later to be changed to “transgender,” although “transsexual” is still technically accurate in some cases).

D’Eon’s name carried on in other ways related to the transgender community. In the mid-1950’s transgender woman Susanna Valenti and her wife Marie established the Chevalier D’Eon Resort (later renamed to Casa Susanna) as a weekend bungalow resort in Hunter, New York for crossdressers. In 1966 four British members of Virginia Prince’s organization for crossdressers established the Beaumont Society, “To provide information and education to the general public, the medical and legal professions on transvestism and to encourage research aimed at fuller understanding.”, and “To provide TV’s with an opportunity for a social life together.”

I was able to purchase from a seller in England a very unique item which highlights part of the furore over the gender identity of the Chevalier d’Eon. In May 1771, the Town and Country Magazine of England published a two-page account of an examination that the Chevalier d’Eon underwent at Medmenham Abbey on May 24th, in front of a “jury of matrons.” In summary, the purpose of the meeting was to determine the sex of the Chevalier, to determine if they were male, female, or something else. Upon further research, it is still not completely clear if this event actually occurred, or if it was not simply a very elaborate parody which was mocking the Chevalier and the public confusion over their sex and gender.

Below I have scans of the article from the original bound copy of Town and Country from May, 1771. This is currently the oldest item in the transgender archives of Transas City. You may access the high-resolution version of each scan by clicking on the smaller images below.

Frontispiece, Town and Country Magazine, May, 1771. 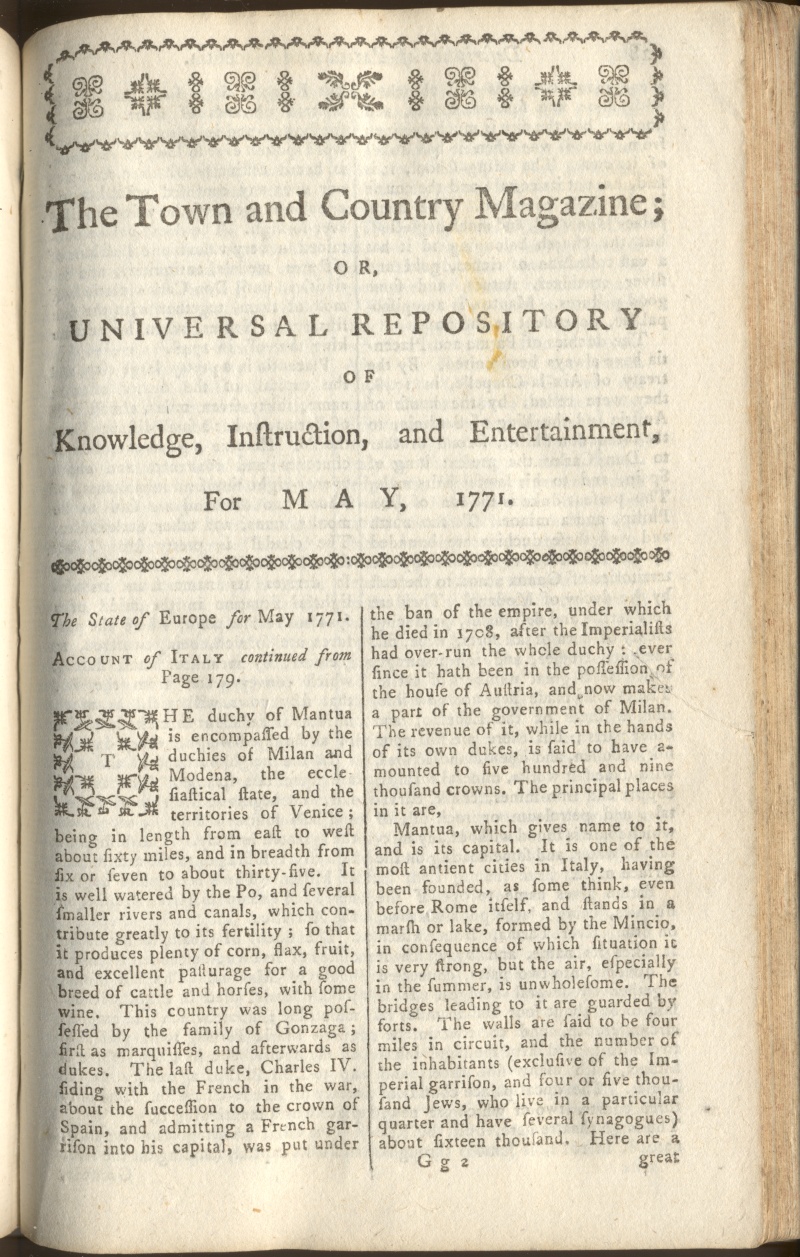 Woodcut, showing “The Trial of M. D’Eon by a Jury of Matrons” 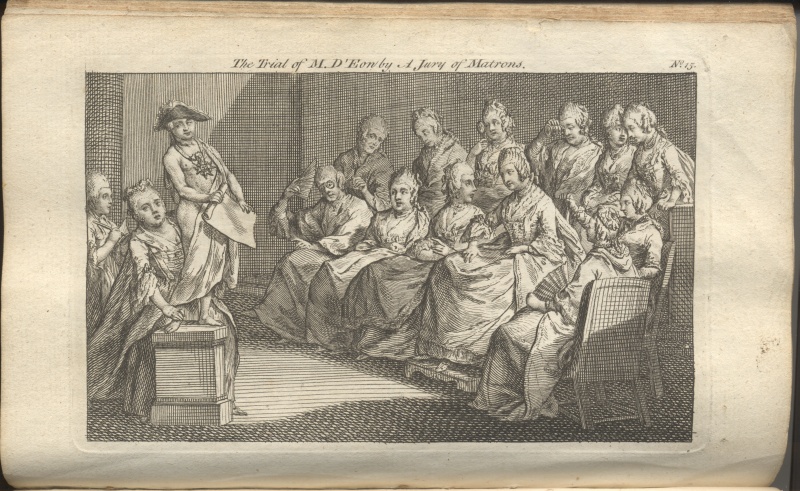 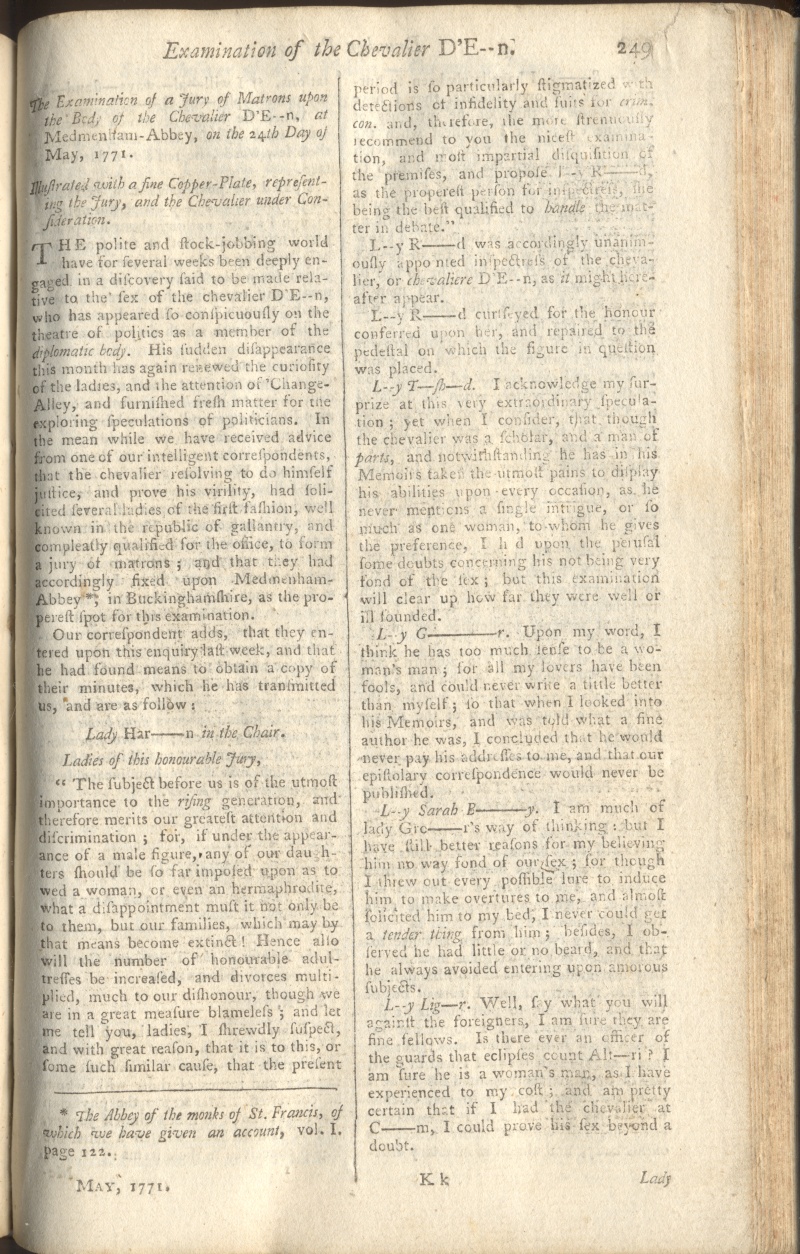 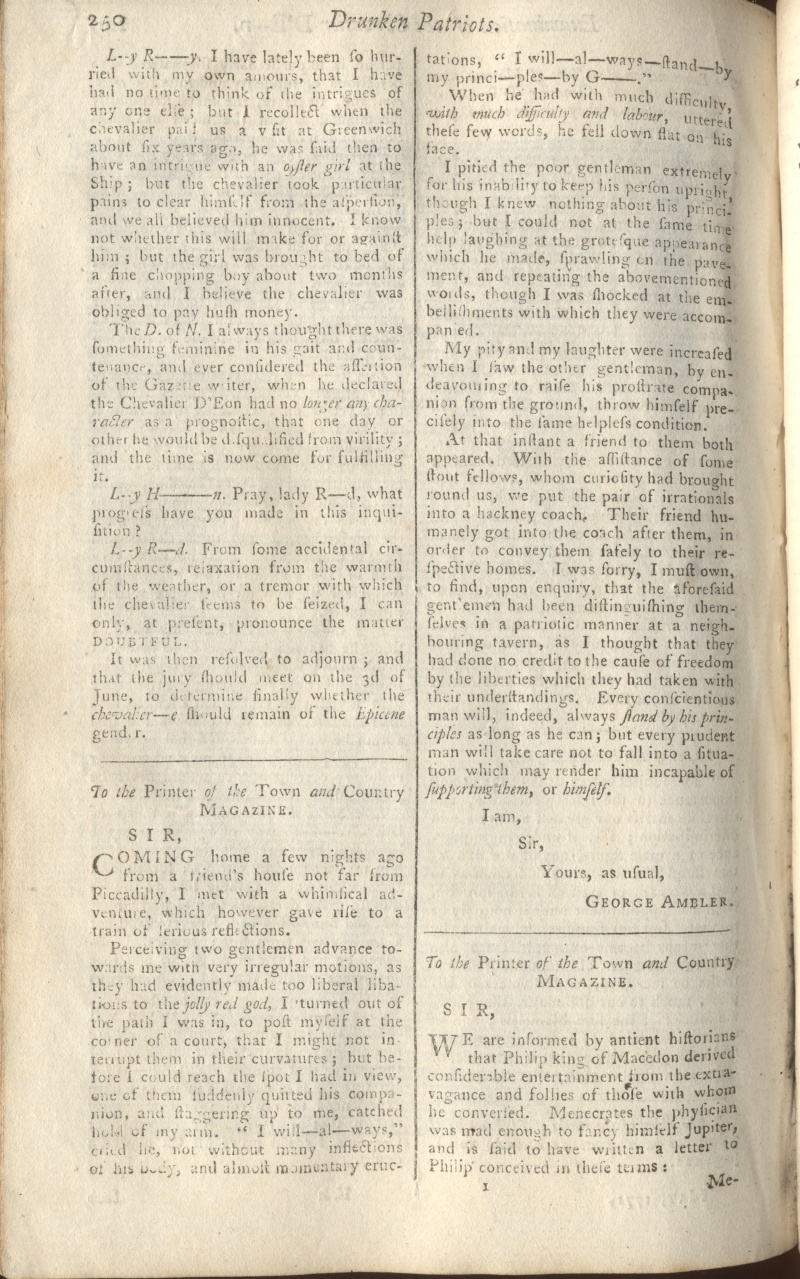