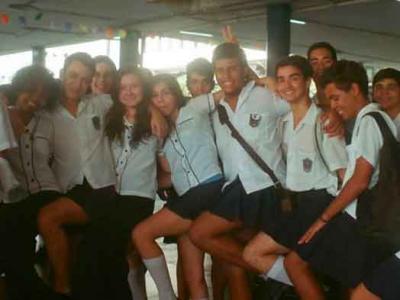 A touching story of support for a transgender student, which has a happy ending. The article is short so I’ll report most of it here:

17-year-old Maria Muniz, who recently came out as trans at São Cristóvão do Colégio Pedro II, was disciplined by teachers and handed a fine after she wore a skirt to school, instead of the regulation boys’ trousers.

The school claimed that their Code of Ethics did not permit “male” students to wear female uniforms – but was forced to backtrack on the decision when the girl’s classmates decided to protest by all wearing skirts to school too.

Maria Muniz said: “I always turned up in trousers but I felt repressed and for me wearing a skirt was about expressing my freedom over who I am inside and not how society sees me.
“I am really happy about the way my classmates supported me and I hope it serves as an example to others to feel encouraged to do the right thing.

The school, for its part, backed down and decided to change its policy (no word explicitly on whether the fine was rescinded). The fact that this is Brazil may lead some to believe that this story was not so unusual, given the large transgender population in that nation. However, culturally speaking, Brazil suffers from a cultural dichotomy or love-hate relationship with transgender persons. Brazil leads the world for the number of murders of transgender women, as well as the number of transgender prostitutes (called travesti). This document in the Transas City collection gives quite a bit of information on the travesti (don’t be thrown by the use of the word “transvestite” in the document; it’s being used to represent both crossdressers and transgender persons).