Rae (or Ray) Bourbon was a female impersonator who made news for some time by claiming that they had undergone sexual reassignment surgery (SRS) not long after Christine Jorgensen and other Atomic Era transsexual women had done so. Unraveling the truth of Bourbon’s life is very difficult, as he was a notorious exaggerator at best, and liar at worst. Even his birth name and place are in dispute, with many believing it was somewhere between 1892 and 1902, most likely in Texas. Bourbon himself claimed that he got his start in female impersonation in the 19-teens, as a stunt double for silent movie actresses. He appeared in several small film roles, and performed as a dancer in nightclubs and as part of a vaudeville act. He claimed to have modeled women’s dresses in a department store in Bakersfield, California in 1929. Although some claim that he didn’t start working full-time as a female impersonator until 1932, I have some evidence he may have started in 1931.

He continued working in gay-friendly nightclubs across the United States for the next two decades, and released several record albums of his spoken acts. In 1956 he began claiming that he had undergone a “sex change” in Mexico, and presented what appeared to be legitimate medical records stating such. However, according to a historian devoted to Bourbon’s life, he actually at most went to Mexico for treatment of cancer, which may have resulted in the loss of one or both testes. He nonetheless rode that “sex change” horse for the next decade in his acts.

In 1968 Bourbon was accused of being an accomplice to murder as a result of a dispute over approximately 70 pet dogs owned by Bourbon, whereby a kennel owner (A.D. Blount) sold off his dogs after Bourbon could not pay for their upkeep. Bourbon hired two men, Bobby Eugene Chrisco and Randall Craneto, to beat Blount up, but Blount died from his injuries. Bourbon was arrested and convicted with the two men, and sentenced to a 99-year prison term. He died in hospital in Brownwood, Texas, while serving his prison sentence in 1971.

Bourbon authored a few books, none of which reached any prominence. While some are somewhat interesting from a historical standpoint, it’s also very difficult to determine what is fact and what is fiction in his books.

An advertisement for a fashion tea at the Stockdale Country Club, Bakersfield, California, March 13, 1931. 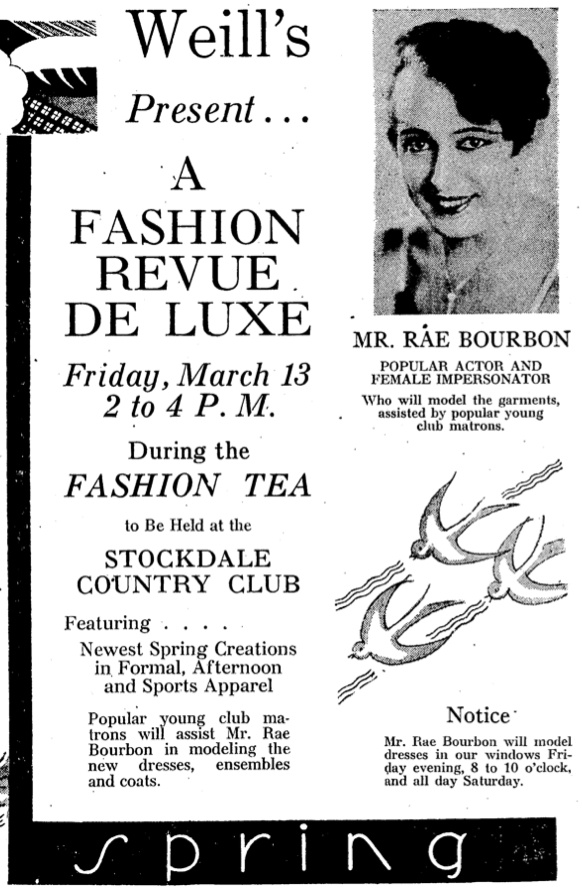 A publicity flyer showing Bourbon’s medical report from Mexico claiming he had undergone SRS. Roughly, it says that a surgeon certifies that after an operation performed upon Bourbon that he is “el dicho individuo más mujer, que hombre” (this individual is more woman than man). This could actually simply refer to the loss of the testes, as it was very common in that era, especially in Hispanic nations, to attach the primary discrimination of male gender to the testes, and not the penis.