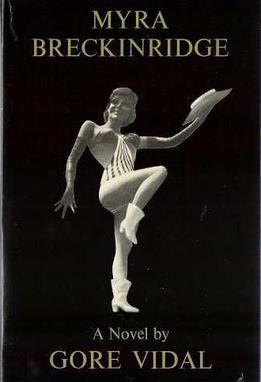 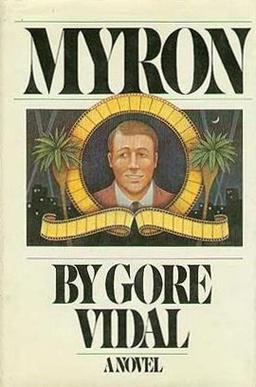 This is actually a review of two books – Myra Breckinridge, which was published in 1968, and its very closely-tied sequel Myron, published in 1974. Neither book is in the public domain, so I will not be posting a digital copy of them.

If you don’t want to read the details of the reviews, the key points are this: both books are transphobic, homophobic, and racist exploitation pieces which in my opinion are trying to masquerade as “high literary art.” I believe one cannot even excuse them by claiming they are a “product of the the times,” due to the way in which they were written, as well as their content. Gore Vidal clearly had no idea what a transgender person really is, nor any true concept of gender identity, and he essentially crafted a diatribe on gender and social topics of the late 1960’s and early 1970’s while driving a metaphorical bus over transgender persons.

On its face, Myra Breckinridge could be summed up as a bizarre novel of revenge, featuring a transsexual woman – the titular character – as a vain, delusional, megalomaniacal woman who is hell-bent on ruining the lives of all those around her. Her drive for doing this is multifaceted, and introduced throughout the work one rant at a time (the book is written entirely in the first person). In the start of the novel, Myra monologues that she will conquer all men as some sort of misandrist vengeful goddess, and she begins by setting her sights on one man in particular, her rich uncle Buck Loner (“Uncle Buck”). Uncle Buck is a former B-list star of cowboy films, and has taken his earnings to create an Academy of Drama and Modeling. The Academy is essentially a fraud, intended to give false hope to star-struck actor wannabees, and Buck himself is a misogynistic, abusive, unpleasant person.

Myra shows up at her Uncle Buck’s office, claiming to be the widow of her former male self, and demanding 50% of the value of the Academy. While Uncle Buck stalls for time trying to find a legal way out, Myra begins teaching both Empathy and Posture at Buck’s Academy. Soon afterwards, through several rants, Myra reveals that her goal is to not only end population growth (a subject which she obsesses over in both novels) but to reverse it – via the widespread encouragement of transsexual surgery on men. In short, curbing masculinity will remove the drive for economic and social power of men, which is the root of much of the world’s evil. Unable to be real men, men will masquerade as such, theatrically, to much less detrimental effect to the world. Or at least that is her plan.[Stimpson]

As the novel wears on, it becomes clear that Myra finally is only narcissistically concerned with herself, and this becomes another motivation for all that she does. Although she tries to fit in to the culture of the school, Myra finds only one semi-friend throughout the book: Leticia Van Allen, a power-hungry Hollywood deal-maker in public, but a submissive sexual masochist in private.

As part of Myra’s scheme she works to break up two young acting students in love – Rusty and Mary Ann – by the tactics of trying to abuse and emasculate Rusty, while seducing Mary Ann. In the most horrifying scene of the book (and the eponymous film which followed), Myra finally breaks Rusty after a very lengthy and disgusting scene where she rapes Rusty with a strap-on dildo. In some versions of the print book, it’s a 30-page scene! Traumatized by the event, Rusty leaves Mary Ann and shacks up with Leticia Van Allen, where he starts physically abusing Ms. Van Allen (much to her pleasure, even to the point of feeling turned on when Rusty puts her in crutches). Later Rusty is “transformed” into a woman-hating gay man, all of which allows Myra the freedom to begin a serious seduction of Mary Ann. Mary Ann responds to Myra emotionally, but refuses to respond sexually due to not being a lesbian, exclaiming how she wishes that Myra was a man.

In the end Myra achieves most of her goals. Her Uncle Buck, having discovered that his nephew Myron never died nor married, has his victory quashed when Myra admits that she is in fact the transitioned Myron, hiking up her skirt to show him her surgical results. Myra takes a large check from her uncle, buys a house, and Mary Ann moves in with her to continue their relationship. Armed with her victories and money, Myra begins a larger quest to spread her mission of sterile, transgender women as being the solution to world overpopulation. Her schemes abruptly come to an end when she is struck by a car in a hit-and-run accident (it’s implied that Rusty was the driver, but the identity of the driver is never revealed). Critically injured and hospitalized for months, Myra finds upon awakening that her breasts have been removed due to the injuries she received, her hormone regimen stopped, and she suddenly feels like de-transitioning back to Myron. She does so, marries Mary Ann, opens a catering business, buys a suburban home complete with barbecue pit, and raises dogs. In effect, Myron becomes the emasculated submissive male that Myra wished to make of all men.

According to some book reviewers, Myra Breckinridge is supposed to be some sort of deep commentary on the cultural and sexual norms of conservative Western society, as well as a look into the decline of the Hollywood film industry. Myra frequently pontificates on the themes of zero population growth, phallocentricism, gender fluidity, etc., but it all comes across as psychobabble of a troubled mind, rather than any actual social criticism. Others believe that Myron, having failed to dominate men by submitting to them homosexually, decided to embrace his feminine side completely in order to become a “bitch-goddess” who could dominate men in other ways.[Carlevale, Stimpson] Another possibility is a parallel between Myra’s transition and her obsession with Hollywood films from 1935-1945, as the actors and actresses within the films go through a transition appropriate for every role they play – and Myron has effectively gone through his own transition for the role of Myra.[Carlevale]

The story in Myron takes place in 1974, several years after the closure of Myra Breckinridge, re-introducing Myra as the de-transitioned Myron, who is married to Mary Ann and the owner of a Chinese catering business. Myron is a homophobe and transphobe, and represents a typical conservative Republican-caricature of the early 1970’s. Very early in the book, Myron is watching a late, late film on television – Siren of Babylon, a fictional film made in 1948 and starring Maria Montez and Bruce Cabot (real actors from the era). At 1:07 a.m., for no apparent reason, Myron is leaning towards the television to turn the volume down when he is suddenly sucked into the world of 1948, on the film set of Siren.

From here on out the story is a strange science fiction one, completely different in character from Myra Breckinridge. Myron discovers that not only has he been drawn into a strange alternate universe in 1948, but several others have as well – including some who deliberately try to hide in the alternate universe, such as Richard Nixon. The characters act as semi-ghosts, able to only mildly interact with the environment of the past, and invisible to most of the people inhabiting the 1948 time stream.

Not only that, but “Myra”, exhibiting herself as an alternate personality, starts to take control of Myron’s body, with increasingly greater frequency and duration. Myra fights a battle with Myron, trying to re-transition by changing her body back to female, even trying to cook up silicone so she can re-construct her breasts, and estrogen so she can continue transition. As Myron whines an awful lot in the book, Myra’s manic takeovers of his body seem to be somewhat more refreshing to read. “Myra miraculously reappears, trilling and jilling and throwing her lead-weighted pocketbook around, a General Douglas MacArthur in drag.”[Stimpson]

While Myron is trying desperately to get out of the alternate universe and back home to his wife and Chinese catering business, Myra is trying to stay in the past, changing it by altering reality to achieve a goal of preventing the fall of the great classic Hollywood movie studios, which she blames in part for the decline of Western civilization. She continues her bizarre quest to create sterile transgender Amazons who will prevent population growth and take over the world, planning on performing her own surgery, as well as surgery on others. In one scene she even carries out a “ghost castration” of an extra on the film set. Yes, it’s that sort of book.

Things become more strange (if possible) when Myra, in Myron’s semi-ghost body, is somehow accidentally merged into the body of film star Maria Montez, and lives out part of 1948 working as a full, corporeal entity to change the future. In a strange twist which seems more Moorcockian than anything else, Myra, in the body of Maria Montez, comes into contact with young Myron at a publicity event at a department store, and suddenly she/Myron is thrown “back to the future” in 1974, where it’s revealed that Myra’s tampering with the past has changed the future, creating an alternate time stream. But as for Myron, he is back in suburbia, part of the “highly articulately silent majority” in a California with a transsexual Governor, Stefanie Dude. As the novel ends, Myron hopes that Stefanie will soon be the next Republican President of the United States.

As interesting as that may sound, it’s really not. Myron is a bizarre work, and if it has a deeper meaning it is lost on me. Again, critics claim that it’s a compelling look into the film industry and Hollywood culture of the end of the Silver Era of film, but to me it reads as a transphobic and homophobic set piece with a science fiction spin.

The Place of Myra Breckinridge and Myron in Transgender History

Both books are, as I stated earlier, exploitive works which are very transphobic and reveal that Vidal was trying to use us to make some sort of commentary upon women’s liberation and gender roles (Myra Breckinridge) or the Hollywood film industry (Myron). Transgender persons are not only thrown under the bus in these works, but the bus reverses and backs over us a few more times for good measure. Myra Breckinridge can be a horrifying work to read at parts, and even at its best it’s somewhat vaguely creepy. While Myron is somewhat less vile than Myra Breckinridge, that’s not saying much really. I can only think that Vidal was either an outright transphobe, or an incredibly ignorant man who had no concept of who or what we are as a people (despite the name “Breckinridge” being taken from Bunny Breckinridge, a transgender woman who came out in the late 1950’s).[1] And the only possible audience I can think of for the work are students who are forced to read the work by an instructor – or transgender historians.

Carlevale, John. “The Dionysian Revival in American Fiction of the Sixties” International Journal of the Classical Tradition 12.3 (Winter, 2006): 364-391.