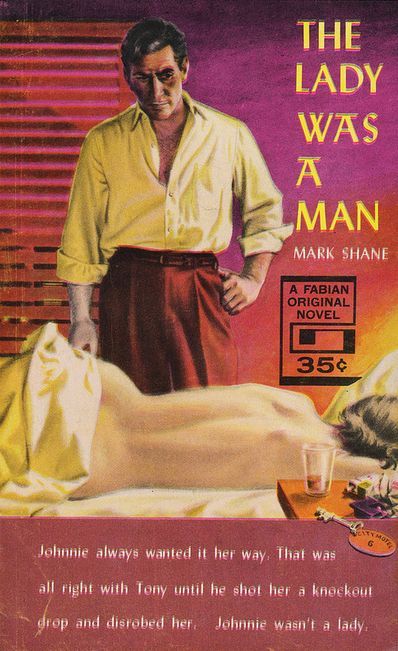 There were several transgender exploitation fictions which were published after Christine Jorgensen’s Atomic-Era story burst onto the scene. From 1953-1954 there were several short stories published in men’s magazines, and prior to Jorgensen’s coming out there were numerous stories featuring cross-dressing and intersex characters. But this work is probably the beginning of a genre of transgender exploitative fiction. Originally published under the title “Sex Gantlet[sic] to Murder,” this seedy crime novel was first printed in January, 1955, and probably written in late 1954. In 1958 it was republished, with a different and more provocative cover, under the title “The Lady Was a Man.” I have copies of both editions, and the cover art of the original book is shown below. 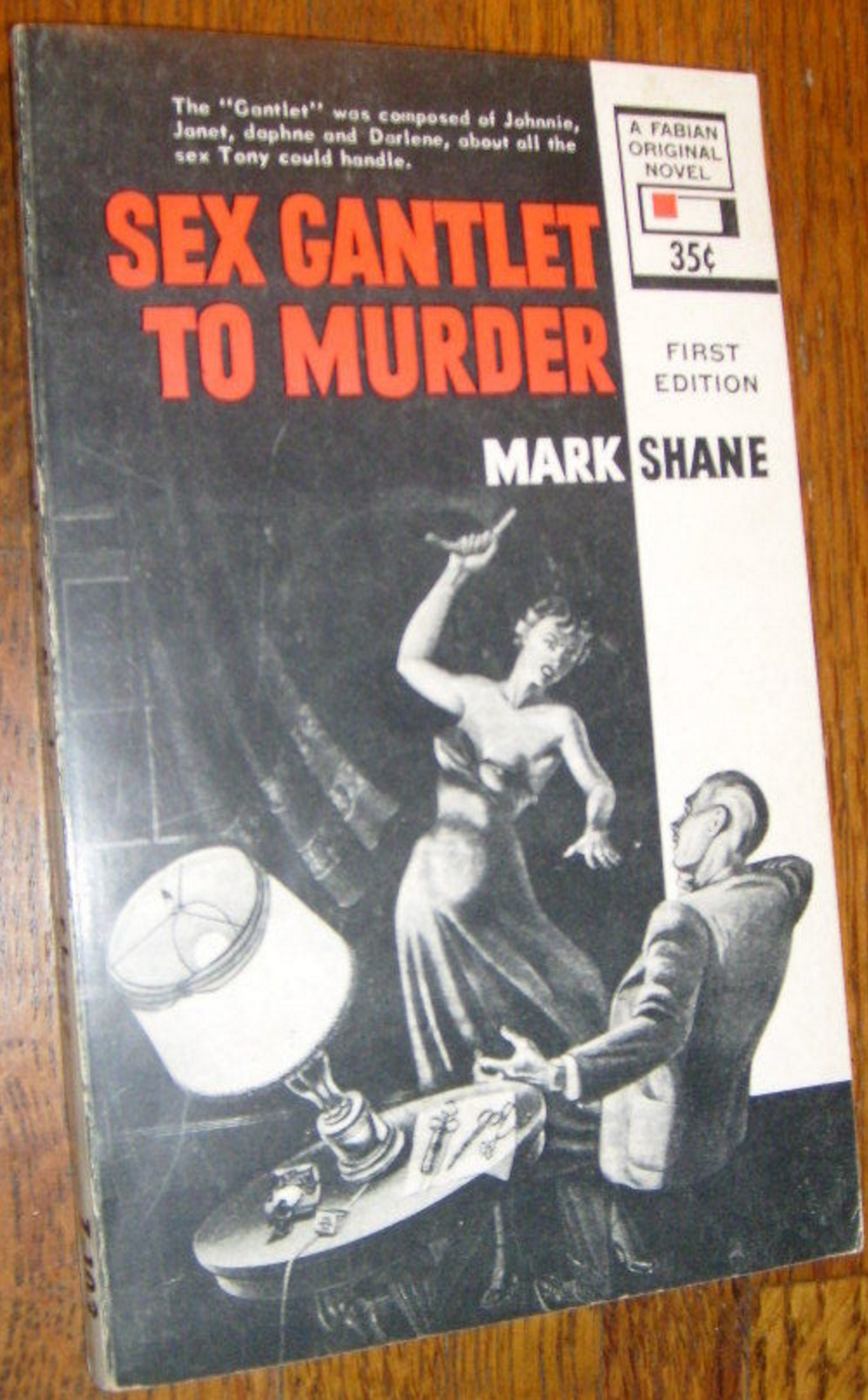 (I do actually own copies of both books, but I need to take my own photo of the original and put it in here – this photo was taken from the site I purchased it from.)

I’ll give a lengthy summary of the plot below, and then discuss the ramifications of the transgender exploitation within the work.
~
Tony Carter is a hard-nosed San Francisco cop who was falsely imprisoned for 3 years on a rape charge, due to the machinations of the married woman that he had an affair with and a psychiatrist named Dr. Fleming. Tony’s released from prison and waiting to meet a friend when by chance he meets the attractive young Janet Paige, who is struck by a car in a hit-and-run accident that seems just a bit too much like an attempted murder. Upon recovery from her injuries, Janet decides to hire Tony to be a bodyguard of sorts. Tony, who is unquestionably attracted to Janet at first sight, decides to take her up on her offer – both for the money, and to see if he can get into her knickers.

Janet insists that Tony live with her family, and this introduces Tony to a strange household inhabiting a motel complex outside of the city limits, run by Millie Paige, Janet’s aunt. Highly coincidentally, Dr. Fleming, having lost his job due to having sex with underage boys, is one of the residents of the household, along with his valet Jimmy. The household also includes Daphne the maid, a family acquaintance Chet, a couple other servants and hangers-on, and the mysterious Johnnie. Johnnie is described as an attractive woman, taller than most, with a husky voice, fake-looking breasts, and an exaggerated sexual walk – no prizes for guessing who the transgender woman in the story is at this point. A friend of Janet’s from New York, Johnnie is further characterized as temperamental, cat-like, icy, aggressive, and even in Tony’s words, “the most hateful acting woman I’d ever seen.”

That being said, it doesn’t take Johnnie long before she plies Tony with Scotch and water and performs oral sex on him with the lights out. She explains her way of making love thus: “I like it best this way. And besides, I’m not well. After I have my operation, things’ll be different.” Tony hasn’t figured out something is up, but not being a complete idiot, he has some suspicions. He oddly receives little enlightenment as to the situation after he is informed the next day that Dr. Fleming is “delving into ways to illegally make women into men, and men into women.” Tony notes that it’s been done before, and seems quite casual about the subject. Tony is also surprisingly casual regarding speculation that Janet and Johnnie are a lesbian couple.

For reasons which are a little contrived, Tony decides to go and have a casual chat with the psychiatrist who engineered the fake rape charge and put him into prison, and during the conversation they have a somewhat frank and slightly sensitive conversation about the subject of sexual reassignment surgery. Dr. Fleming confirms he is researching surgery for both women and men, as well as surgery that could also change gender identity and sexual desire – to make an effeminate homosexual man into a masculine straight man, for example. The conversation, surprisingly, is along the lines that the latter changes shouldn’t be done, because there really isn’t anything wrong with being gay. The conversation veers into the insensitive realm when Tony and Dr. Fleming speculate on how much men would pay to see a nude transgender woman, and there is an implication that transgender women are often effeminate gay men (a sentiment echoed by medical science at the time, well into and beyond the Harry Benjamin era), but overall it’s not as cringe-worthy as I was expecting – yet.

Tony is still, somehow, not sure of Johnnie’s condition, even after Daphne the maid claims she walked in on Johnnie once while she was changing, and saw what she thought was a penis. Tony rationalizes the encounter as Johnnie probably wearing a strap-on, confirming in his mind a lesbian relationship between Janet and Johnnie. That being said, Tony then has another sexual encounter with Johnnie, and for reasons which appear to be odd, one with Janet.

At this point, there is a segue in the book away from transgender-related topics and into a B-grade detective story, which is more confusing than interesting. Dr. Fleming is found murdered, and Tony is framed as the lead suspect for the crime. Tony is given leeway to investigate the crime on his own, and he quickly discovers that Dr. Fleming is having a sexual relationship with his valet Jimmy, and Tony seems to accept this rather matter-of-factly. Johnnie is grief-stricken upon learning of Dr. Fleming’s murder, and she cries to Tony “He was the one guy who could have done something for me! Five thousand bucks! Where’ll I ever get that kind of money again?”

Finally we come to the climax of the transgender issue in the book – after many more contrivances and suspicious actions by many of the players, Tony tricks Johnnie into meeting him in a hotel room, pretends to love her regardless of her body parts, and convinces Johnnie to disrobe completely – whereby it’s confirmed that Johnnie is a pre-operative transgender woman. From that instant onward, Tony deliberately misgenders Johnnie, and is filled with trans panic rage, thinking “I had never wanted so badly to beat someone to death.” He then proceeds to spike Johnnie’s drink with chloral hydrate (in effect, giving her a roofie, which we discover apparently isn’t something the cops care about in 1954) and leaves her naked on the bed after she passes out.

Tony confronts Janet, believing that she killed Dr. Fleming to prevent him from performing sex reassignment surgery on Johnnie. Instead, it’s revealed that Janet intended for Dr. Fleming to perform a different surgery – to operate on Johnnie so she would no longer be transgender! When this connivance was discovered by Johnnie, she attempted to kill Janet in the hit-and-run accident, and eventually she was driven to kill Dr. Fleming. In effect, she tried to protect herself from the two people who would have stolen her gender identity from her. At the book’s denouement, Johnnie is rudely exposed before the police to confirm her genitals, Aunt Millie shoots herself, and Tony lives happily ever after with the maid.
~
Overall, this book is an archetypical transploitation and transgender panic story. It tricks you at first with Tony’s nonchalant attitude about lesbians, gay men, and effeminate gay men or transgender persons in prison. And it’s confusing that Tony very quickly turns ugly and violent with transgender panic when Johnnie reveals herself to him, when he simply has to know, or at least have a very strong suspicion, that he was receiving oral sex from a transgender woman. In the character of Janet, we see an unsupportive partner who is willing to resort to bribing a physician to perform an unwanted surgery on a transgender person, to de-transition them.

The character of Johnnie, introduced fairly unsympathetically in the beginning of the story, is actually someone your heart goes out to. From the 21st-century reader’s standpoint, Johnnie’s actions – attempting to kill Janet and killing Dr. Fleming – are at least understandable, if not ethical nor legal, given that both of those individuals were trying to erase her gender identity by an unwanted surgery. In the contemporaneous context of this work, there would have been only a few publicized cases of gender transition at that time (Jorgensen, McLeod, Rees, and Cowell among women; Dillon among men). Very few facts of what it was like to be transgender were available, and even among physicians there was vast ignorance. The general public essentially either considered transgender persons to be crossdressers or gay men who had gone “too far.”

It’s not a great story, but upon finishing it, I was struck by the thought that by re-writing 2-3 pages out of 156, the book could have been re-cast into a tragic but supportive transgender story. That unfortunately was something that would be quite rare to see for the next half century.