Renée on the Court

Reviewed by Una, 26 November, 2012
Second Serve is an autobiography by Renée Richards, born Richard (Dick) Raskind, known for her exploits in the courts: Supreme, and tennis.

As you read this autobiography, you can tell right from the start that Richards is going to have a turbulently-gendered life. Richards unashamedly tells of her extremely dysfunctional family, almost a textbook example of a boiling household psychodrama. Her father, a respected physician, is aloof and intimidated by her mother and avoids the house as much as possible. Her mother is a frustrated neurologist and psychiatrist who butted heads against the male medical establishment for decades, and serves as the ruler of the family. She delights in dressing Richards in girls’ clothing, even sending her out to a party dressed as a girl, and Richards writes almost lovingly of sleeping with her mother until her early teens, caressing her mother’s nude body, etc. Her older sister Michaell (not Michelle) is a randomly sadistic monster who is being raised to be the “man of the house” by the mother, and enjoys playing such games with Richards as “slap you in the back of your head” and “let’s force your penis back inside your body.” By the time her sister reaches her early teen years, she has already instituted a mutually pleasing sexual relationship with Richards.

Despite having a family straight out of a Fellini film, Richards manages to excel in both academics and sports, becoming a tennis pro at an early age. Relationships with friends are difficult due to her home life, but she manages to accumulate a small group of wild and eclectic friends, even having a few romances along the way. It’s when she becomes a teenager that Richards starts to cross-dress in her sister’s clothes, becoming a new personality: Renée. This is more than just acting out a crossdressing or transgender influence – Richards makes no bones about categorizing the relationship between Dick and Renée as being akin to a true multiple personality disorder (a possibility which Richards, a physician herself, admits is remote). However, if you believe Richards’ descriptions of how she acts as Renée, it’s not hard to give it credence. Renée is adventurous, vain, dangerous, and hates male body parts, leading Renée to severely injure her penis and testicles on numerous occasions.

Manifestations of Renée come and go through high school, and later undergraduate school at Yale. At times Renée is pushed to the background, but always returning with a vengeance. This leads to further self-abuse and a seedy encounter with a male club owner, where she is essentially date raped. Psychotherapy (Freudian flavor) is started early in college, and although Richards attended dutifully for 9 years she received pretty much no benefit whatsoever from it – something which is mirrored in the biographies of many other transsexual women. Somehow she holds herself together to graduate from Yale, and subsequently through medical school, although as she enters her medical internship her urge to be Renée becomes overwhelming.

A trip to France to meet Coccinelle and other transsexuals results in mixed results, with most of the other women telling Renée she is too large and too male-looking to ever succeed. As things come to a head, Renée is now mostly in control of Richard, so she quits psychotherapy and visits Dr. Harry Benjamin. Benjamin starts her on hormones immediately, and Richards tells of remarkable, almost unbelievably fast and dramatic results. Some of the results I can relate to, others not – her mood improvement sounds exactly like what I went through, but her rapid breast growth seems atypical and beggars belief.

Here the story sees a strange twist of fate – Dr. Benjamin contacts Renée and tells her that he is discontinuing hormones to force her to take some time off to “be sure” she is really female. The reasons for this are twofold: first, Dr. Benjamin sees that Renée has a promising career as a physician, and claims that no transsexual physician is going to be accepted by society. And second, Dr. Benjamin is suspicious of the fact that Renée is a lesbian. Many historical sources have reported the same bias being shown by Dr. Benjamin, and if I recall correctly in his early writings he often noted that trans lesbians were really crossdressers, and should not be treated with hormones. As progressive as Dr. Benjamin was, he was also a product of his time.

Renée then goes on a road trip through several high-profile residencies, cruising the US in an authentic brand-new Shelby Cobra. Given how focused she was on its engine and performance, I was surprised to notice a typo of her reporting the engine as have “427 cubic centimeters,” rather than 427 cubic inches. Renée finds success at every residency, learns how to fly, learns how to carry and use a gun to defend herself, and ends up at a prestigious position as an ophthalmologist on Park Avenue in New York.

Here Renée starts to take over Richards’ life, leading to several rapidly progressing events. She obtains hormones from overseas, starts electrolysis in earnest, and starts dressing and acting as Renée pretty much full-time outside of a busy work schedule. A tracheal operation is performed to reduce her Adam’s apple, resulting in a ghastly surgical mistake which is spine-chilling to read. She searches for someone to perform sexual reassignment surgery (SRS), but finds that the few surgeons who are qualified to perform the surgery in the United States either have put all surgeries on hiatus, or else reject her for one reason – because she is a doctor, and they don’t want the publicity. Remember, this was part of the “dark ages” of being a transsexual, when not only were the gatekeepers as stern as St. Peter with a Glenmorangie hangover, but there weren’t very many of them.

Renée travels to Europe, to both live full-time as a woman and to practice medicine on a sabbatical. While on the continent she has many adventures, most of them sexual and some of them quite scary. She is victimized in a transphobic incident in Spain and ironically ends up in jail herself, facing serious charges. The American consulate frees her, and she leaves immediately for Morocco, deciding now is the time for her SRS. But while in Morocco she twice walks up to the steps of the clinic, and somehow just cannot steel herself to enter, returning home to New York in defeat.

She then focuses on her practice, with Renée tormenting her all the while. Renée is sent into remission by a romance, a marriage, and a son. Richards even undergoes breast reduction surgery, so certain is she of never being Renée again. And then Renée emerges, yet again, this time with hormones but sans breasts. By this point in the book the reader is really questioning the motivation of Richards. She seeks out Dr. Benjamin again, finds that he is retired, and finds psychologists and physicians who are all suddenly on-board with her having full SRS. Now everything comes in one big rush – she is fast-tracked into surgery, and within a matter of days, it’s done.

Then comes the recovery process, which again seems oddly conducted, in secrecy and with lots of money thrown around. It’s highly fortunate that Renée seems to have loads of money through most of her history, because any other transwoman who acted like she did would have faced serious challenges in life. But Renée has money, a lot of it, and that makes all the difference in the world. One telling quote from the book:

“I’m the first to admit that I’m basically a selfish person. All I want is my Ferrari, my beautiful apartment, and my tennis club.”

Without spoiling too much of the ending, Renée moves to California and with the help of sympathetic co-workers and supervisors, is able to conduct her life as a star female ophthalmologist. Unfortunately, in typical Renée style having everything she wants is not enough, and so she puts her privacy and career on the line and starts competing in local tennis tournaments. Of course a 6-foot 2-inch woman who plays like a pro attracts some attention, and when she starts to compete in larger and larger tournaments, the attention increases proportionately. An aggressive reporter outs her on the evening news against her consent, and for a while her life becomes a living hell, chased by news crews and reporters for weeks.

Finally we get to the segment of Renée’s life many of us are most familiar with – her denial of competition in the US Women’s Open, and her New York Supreme Court victory.

Overall Second Serve is an interesting historical read, and I think the reader learns a great amount about a critical transition point for transgender people in history – the turbulent late 1960’s through 1970’s. Unfortunately, the book also casts Richards as an early heroic transgender warrior – a title she is deserving of, although it’s tainted by her recent comments on transgender athletes. From the link above, I quote below.

In an interview with the New York Times in 2006, she made several statements which could be interpreted as decidedly transphobic.

Back to Dr. Richards, who is surprisingly conservative. She calls the 2004 decision of the International Olympic Committee, which allows transsexuals to compete, “a particularly stupid decision,” explaining that when she sued to play at the U.S. Open, she was 40. “I wasn’t going to overwhelm Chris Evert and Tracy Austin, who were 20 years old.”

And while she believes same-sex couples should receive the same benefits as those who are married, her idea of marriage demands a man and a woman.

“It’s like a female plug and an electrical outlet,” she says.

In her book, Dr. Richards never writes that she regrets having had her surgery, yet she lists so many regrets relating to her sex change that it is like someone who returns again and again to the edge of a great pit, but refuses to leap in. Those feelings were also evident in past interviews.

“—I told People what I was feeling, which I still feel: Better to be an intact man functioning with 100 percent capacity for everything than to be a transsexual woman who is an imperfect woman.” (Wadler) 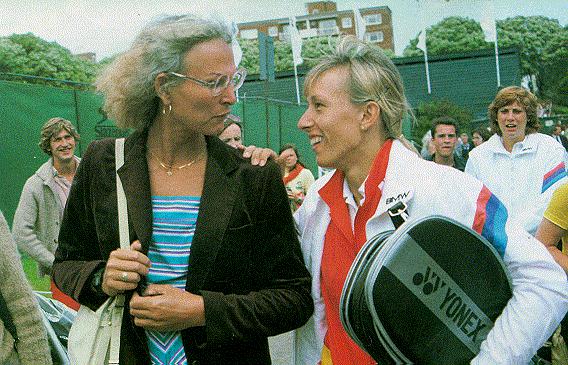 Richards seems to be decidedly in the camp of “I had my cake, screw you.”