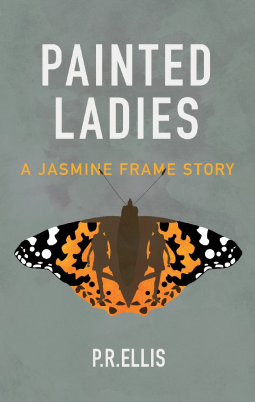 Jasmine Frame is a former police officer who served under the name Jim Frame, until she underwent a gender transition. Her transition cost her a career she enjoyed, and facing an impending divorce, ostracism from family and friends, and a struggle to finish her transition, she’s trying to make it in world on her own as a private detective. Unable to drum up enough business, when the police ask her to help with a case involving a brutal murder of a crossdresser she jumps at the opportunity, and quickly finds herself in the nightmare of trying to catch a serial killer targeting crossdressers. The tension mounts when Jasmine is asked to be a decoy to draw the killer out, which also leads to serious conflict within her as she must pretend to be a male crossdresser. Will she catch the killer before she becomes the latest victim? Read and find out (although the fact that there’s a sequel in the works sort of tells you that she lives…)

Given the protagonist and the authorship I was naturally intrigued by the book, and I found it overall to be a good read. One can sympathize very much with Jasmine and her trials of daily life, especially the transphobia which she encounters from her former co-workers in the police. The editing is good overall, and I did not find one misspelled word, which from that standpoint alone puts it in the top 10% of current novels. The story flows well, and to a reader without transgender experience one would gain some valuable insights into what it’s like to be a transgender person, albeit one with a very tough job. The factual details regarding Jasmine’s transition seem accurate, adjusting for differences in standards of care between countries of course. The descriptions of the crossdressing and transgender “girls nights out” also seemed very accurate, given the innumerable such ones I’ve attended myself. The final “confrontation” scene is gripping and actually made my heart pound with fear (along with me wanting to yell “why did you get into the car with him???”).

The novel is a little rough at times, but only when compared to other professional long-term authors – remember that this is Ellis’ first novel. One very important thing which I need to warn US readers about is the use of the word “tranny.” Some research online indicates that this is still a very common term which is used by the older crossdressing and transgender community in the UK. To a reader from the US, where the word is rapidly becoming a slur, it’s somewhat jarring to see the word pop up on every 3rd page or so. You must therefore read the book with the difference in nationality in mind. I also noted that there was a very significant focus on clothing throughout the book – much more than I think a transsexual woman such as Jasmine would really have. The focus on clothing, especially erotic clothing, may be a function of the fact that many of the primary characters in the book are crossdressers, but nonetheless I found it discongruent with my personal experience and that of my close friends. Finally, I found the rapid move to intimacy in the decoy house between Jasmine and her partner, without any past history to set it up, a little difficult to believe.

I previously highlighted the author in an earlier article here on Transas City. P.R. Ellis is a 61 year old ex-science teacher from Hertfordshire, England, who retired to pursue a writing career (and become a Leominster town councillor). In the article I featured previously, Ellis said:

Her own sense of identity is tested in the search to find the murderer, and Peter’s attempt to tackle transgenderism in the novel stems from his own experiences.

He said: “I’m actually transgendered myself so I’m not transsexual but I do spend some time in my feminine mode – as Penny Ellis – although not generally in Leominster.

Overall this book is an easy read and entertaining, and was worth much more than the price for it. I recommend it, and I look forward to reading the next book in the series which is forthcoming, Bodies by Design. Ellis has also just completed Blueprint, a prequel to Painted Ladies, and is working on another story called The Switch, which takes place between Blueprint and Painted Ladies.

Ellis can be followed at her blog called ellifont.