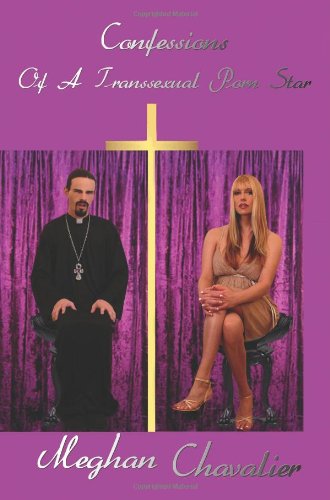 Born in small-town Wisconsin in 1969, Meghan’s early life was the most interesting to me because of all the parallels with my own life. In each of the many trans biographies I’ve read I find something of myself in there – but I’ve never found so many things in common with my life as Meghan’s life up to about age 16. Meghan’s early life is one plagued by an incredibly dysfunctional family, with the centerpoint being a violently abusive father. Her emerging gender identity disorder only makes brief appearances during her childhood – in fact, her gender identity is pretty much downplayed through most of the book.

Like many transwomen she joins the military, but manages to wash out very quickly. At this point we enter a very lengthy part of the book where Meghan details the wildness of her 20’s. On page 88 she states she is proud she was never a thief, but instead she’s just a mooch or sponge of epic proportions. For years she drifts along from one friend’s apartment to another, begging spare money and drugs from them, occasionally working short-term jobs which she drops at no notice, and always wiring her mother for money when all else fails. One gets almost dizzy reading of her perambulations back and forth across the country, living with this friend, doing drugs with that friend, etc. She enters the gay/drug scene of the 1980’s and we don’t see much sign of her gender identity emerging until she hits New Orleans.

In New Orleans she starts performing in drag on the stage, working hard and perfecting her technique, and eventually becomes a star of the drag show at Papa Joe’s. She bounces from relationship to relationship madly, and at this point becomes a hooker. Typically, her boyfriends don’t care that she’s having sex for money as they take her money for drugs and live off her.

My critical review of the book is that it’s, well, a little annoying. The worst part of the book was that being self-published it was in dire need of an editor with a firm hand. I stopped counting major grammar errors after the first 20 or so, and Meghan seems so averse to using commas that at times it’s difficult to tell the subject and the object of a sentence. This makes the book an unnecessary effort to read. The second issue is that the story is more rattling off names and places, rather than talking about feelings and her evolution as a transwoman, or the feelings and emotions of the other transwomen. Finally, one is left with the same impression one has after reading the autobiography of April Ashley – namely that Meghan is not a very nice person at all. By her own words she is a manipulator and user, who would think nothing of calling you her best friend while stealing your boyfriend behind your back for an affair. You spend a large part of the book thinking to yourself not “wow, what an interesting person,” but rather “wow, I’m sure glad I never ran into her.”