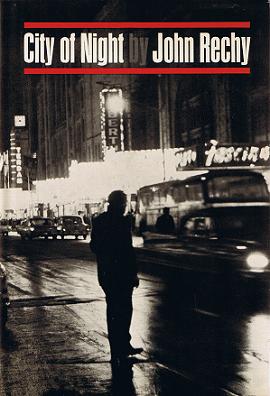 City of Night is not written by a transgender person, nor is the majority of its content about transgender people. However, the book is notable in that it documents the author’s exploration into the dark underworld of the LGBT communities across the United States in the 1950’s and early 1960’s. And it does an excellent job in that sense, without pulling any punches at all. Part psychological analysis and part history, the book has a gritty, no-nonsense feel about it which can be shocking at times.

After a bit of childhood history, the narrator is introduced to the “City of Night” in New York City, receiving oral sex from old men for $5 a session, and sometimes doing other activities. Although he sometimes works short jobs, the night life of the street keeps calling him back. He sometimes returns home to “reset” his life, but always the street calls him back. And along the way he meets an incredible array of unusual, crazy, pathetic, and even otherworldly characters – represented by both the johns and the other street hustlers.

The street of the 1950’s and 1960’s may not have felt the scourge of HIV/AIDS, but it is still rife with danger. Physical assault, drugs, robbery, rape, alcoholism, and a panoply of “lesser” sexually transmitted diseases are just some of the horrors the street hustlers face. Most of the activity occurs in three locations – New York City, Los Angeles, and New Orleans, but San Francisco and El Paso are prominently featured as well.

This book is of interest to transgender persons in that there the narrator meets many drag queens and transgender persons, some of whom are actual transsexuals. At the time, however, the identity of the street hustlers is such that many of the transsexuals have trouble understanding what they really are. There is no transsexual or transgender “community,” rather they are considered to be just an “extreme flavor” of feminine gay men. The fact that there is no transgender or transsexual community leads to a significant amount of suffering which the transpeople of the night go through. They are sometimes even mildly ostracized by the gays and lesbians, or at a minimum their feminine identity is mocked and derided. Even the narrator mildly looks down on some of the transgender people, lightly mocking their desire to live authentically as women.

City of Night is written in a very odd style, with many neologisms and slang terms, as well as omitting letters and characters at times to create a written dialect which is supposed to mimic street slang. At least that’s what Wikipedia says; whatever the driver for doing it, the effect is somewhat jarring at times. Overall it’s a quite interesting book, just not an easy read.