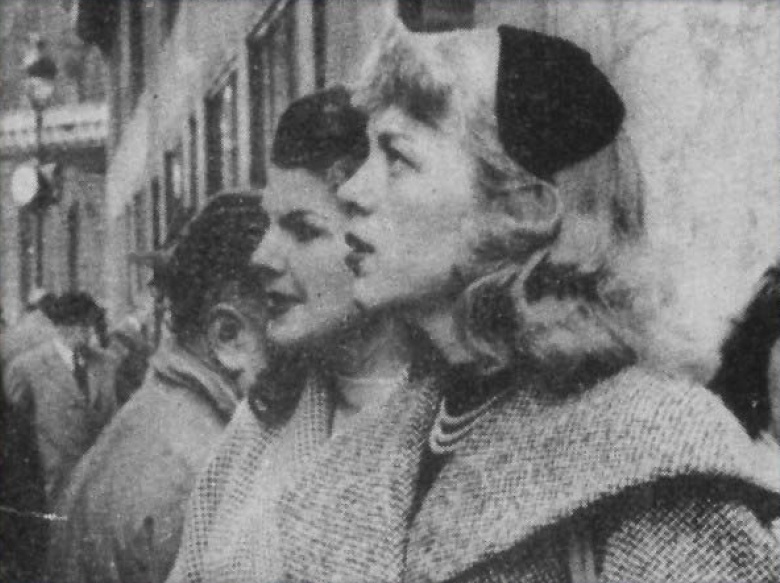 Roberta Cowell is notable for being one of the very first transsexual women in the public eye in the United Kingdom, and she is one of the very earliest to undergo male-to-female sex reassignment surgery in the world. As she predates the much more famous Christine Jorgensen on both counts, her story is an especially interesting one from the pre-Christine perspective.

Roberta was born Robert, the son of a surgeon in the British Territorial Army. Her mother was a housewife who was active in social work. Being a middle-class child, Roberta was very quickly sent off to preparatory schools, where she discovered an aptitude for both mathematics and boxing, also liking tennis and fencing (as I do).

An early bought with obesity likely started a series of body image problems, and Roberta from the earliest pages of the book focuses quite a bit on her belief that she was intersexed. She describes having female hips, a female fat distribution, small features, female hair patterning, etc. She focuses on this quite a bit in the very start of and the second half of the book, and maintained for all of her life that she was intersex (examination late in life proved that she actually was not, unless it was a subtle hormone irregularity).

An aptitude for mechanical things, especially automobiles, was evident very early on. She learned how to repair, build, and race automobiles, something she frequently did in the pre-WW2 years. This love of racing and machines led to a love of airplanes. She joined the R.A.F. as a student pilot in 1935, and later enlisted fully in 1940. She received her commission of Captain at 1941, and was sent to Iceland to head a repair shop. She eventually received a flying assignment and joins a fighter squadron. Although she did not see much action, she had several narrow escapes due to some abnormal flying accidents and incidents. A large amount of the book details both mundane and somewhat interesting items of the war preparations and training. 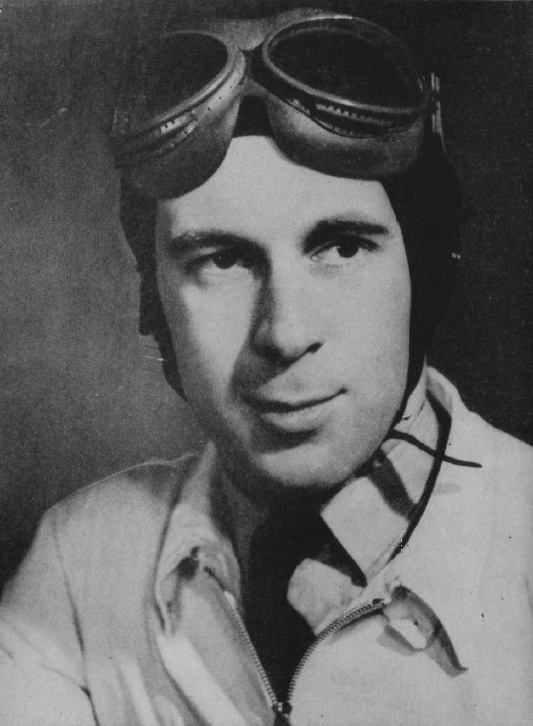 Roberta’s first real sexual experience came from the unsuccessful advance of a fellow male tennis player, which increased her horror of being thought a homosexual. She had a few girlfriends in short relationships. She married a woman engineer in 1941, but only had two weeks of marital bliss before she was sent to Iceland. She speaks very, very little of her wife – practically nothing is said on the courtship, and only a few sentences devoted to anything else regarding her.

The war adventures continue, and sometime after D-Day, she is shot down over German lines. Amazingly, she is taken to the same prison camp, in the same month, as my paternal grandfather! I got a little thrill over that, thinking that it was actually possible my grandfather had met Roberta Cowell. Her descriptions of Stalag Luft I match what my grandfather used to tell me. She is eventually liberated by the Russians and returns home to try starting up a small business, finding that the English post-war economic climate is anything but good. She also suffers from some mild post-traumatic stress disorder.

In 1948 she separated from her wife, despite having brought forth two daughters, and begain psychotherapy over a general depression and malaise. Here her story of psychoanalysis, Freudian style, lines up with that in so many other trans histories I’ve read. The entirety of Freudian psychoanalysis sounds, from the viewpoint of the patients, to be a colossal load of unproductive money-wasting rubbish, and it doesn’t help Roberta in this case either. But it does give rise to the start of her realization that, along with her feminine features, there is actually a woman inside of her.

A physician speculates on her intersexuality, and suddenly, when she can conceptualize her growing feelings of femininity in a medical context, she starts to feel better. At this point in the book, you can start to see the typical gender transition snowball rolling down the hill. She meets more and more physicians, all of whom are reportedly “in wonder” over her intersexuality. A female endocrinologist (surely a rarity in 1940’s England!) prescribes a hormone regimen for Roberta, and like many transwomen who write autobiographies, she claims remarkable and rapid transformation to all parts of her body. Skin, breast development, loss of muscle, everything happens on fast-forward somehow, even her beard vanishes completely, something which beggars belief. At this point she realizes she is only interested in men. Even her handwriting changes unconsciously. To hear her tell of it, you almost expect her penis to suddenly invert and for her to start having periods! 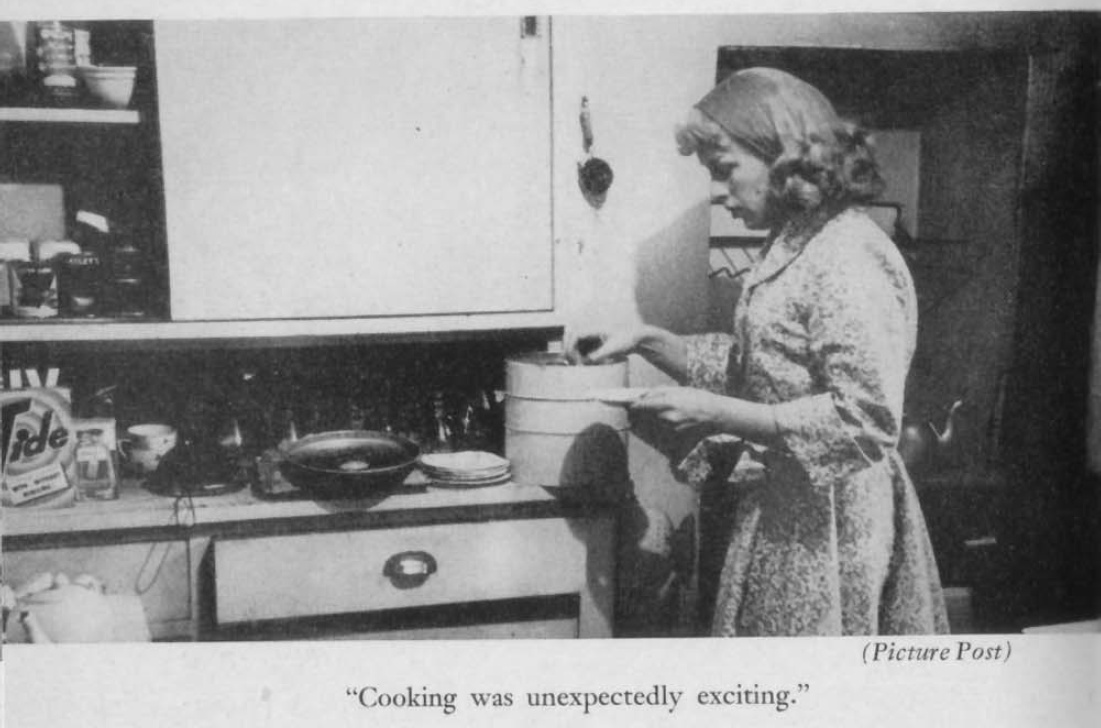 Roberta Cowell in the kitchen.

Two years of hormone treatments pass, with Roberta still not fully out as a female. In 1951, she claims that the doctors were convinced, without any surgical alteration, that she was female, and they even ordered that her birth certificate be altered. At this point a series of SRS operations is decided upon, to correct her “intersex” condition to give her a female-appearing body. She moves out with a platonic female friend, and starts appearing in public as a woman more and more. Her SRS goes without a hitch, although the book is vague on whether it was simply a labiaplasty, or if a vaginoplasty was performed. Facial feminization surgery (FFS) is next, and goes well for her (or so she reports). At this point, she claims that thanks to hormones, she gained 5 inches in her bust, 2 inches on her hips, lost 5 inches around her waist – all of this is possible – but amazingly, lost 1.5 inches in height!

She then enters a world of learning about cosmetics, hair styling, clothing, and cooking (which she especially enjoys). She reports having men trying to pick up on her, in an awkward 1950’s English style, and about a first date with a man. One scene which was funny was when her date’s starter was stuck, and she knew how to fix it, but didn’t want to let on that she knew more than a mere woman should – so she “sat by demurely while telephoned the A.A. and at length got help.” In fact, she says she had to adopt the quote from Martin Luther, “no gown worse becomes a woman than learning,” and continually had to play dumb to let men take care of her. In fact, Cowell evinces a somewhat patronizing disdain towards her fellow women which is not really endearing.

She meets her mother and father as Roberta, and the introductions are rocky, but they eventually get along well. At this point in the book Cowell segues into a discussion of transsexuality and other famous transsexuals, such as Lili Elbe and Christine Jorgensen. She then talks of transvestites and her experiences with them, and moves on to discussing genetics and intersexuality – much of it relevant still at a basic level. Some of her suppositions about hormone effects are a bit naïve, but were not uncommonly adopted by physicians of her time. 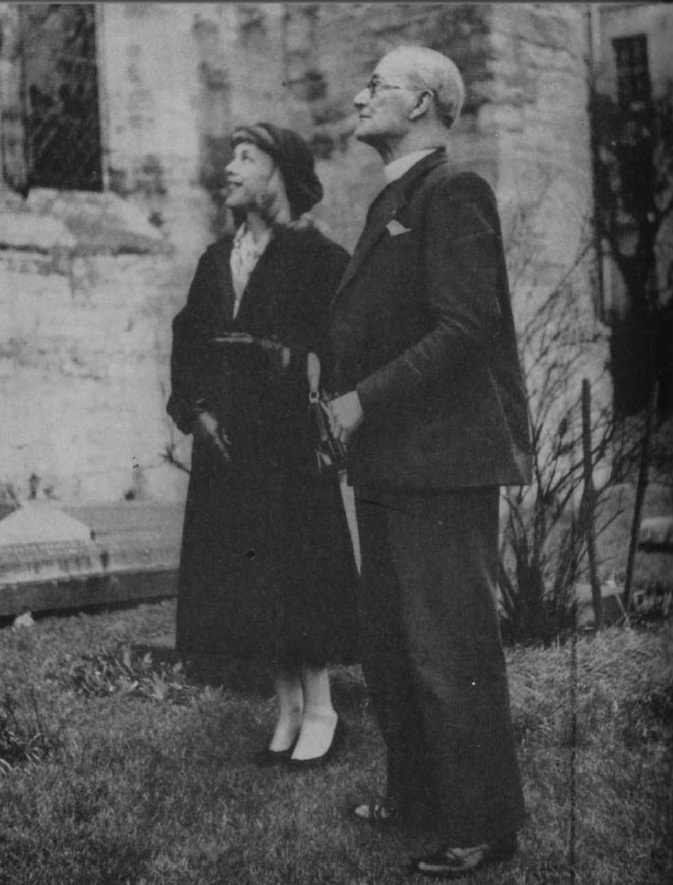 Roberta with her father.

She returns to the story and relates an account of her first trip abroad as a woman on vacation, and how it led to a wonderful date with a charming man in Paris. She describes it with a Wodehouse quote: “It’s like eating strawberries and cream in a new dress by moonlight on a summer night, while somebody plays violin far away in the distance.” Whereas my first trip abroad as a woman was to inspect a coal power plant in Yorkshire… 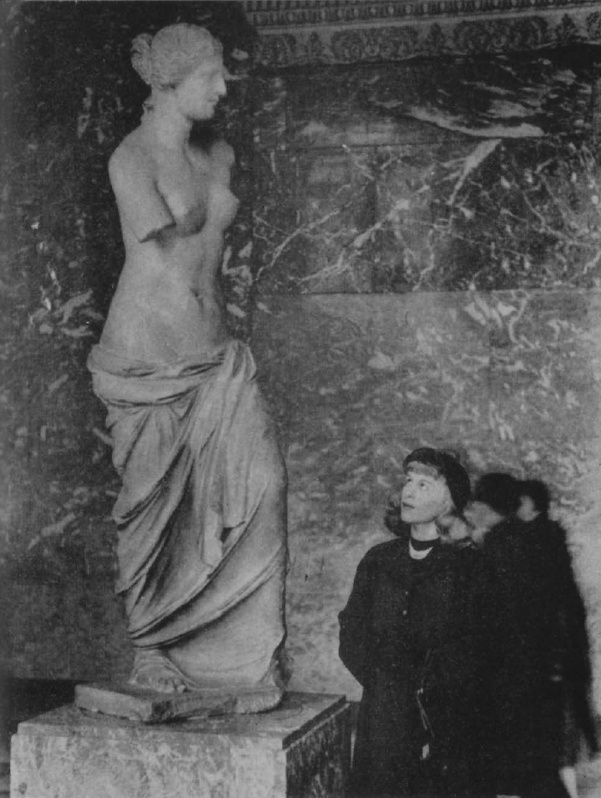 Roberta Cowell at the Louvre in Paris, viewing the Venus de Milo.

She writes a little of how her feminine emotions continued to evolve, including gaining the ability to cry refreshingly, and the book finishes with one nice quote: “The past is forgotten, the future doesn’t matter, and the glowingly happy present is even better than I had hoped. I am myself.”

Roberta Cowell was a pioneer, but she is not an icon for the trans community to admire. Later in life she made a point of claiming she was XX, despite having sired two children, fudged a bit of her history and war record, and most critically, made some ugly statements about transsexuals, calling them “freaks” because they weren’t “intersexed” like she claimed to be. This feeling does not come through in her autobiography, as it ends too soon, so the book stands alone as a decent read and an interesting insight into the pre-Jorgensen transgender world.

1 thought on “Book Review: An Autobiography of Roberta Cowell”