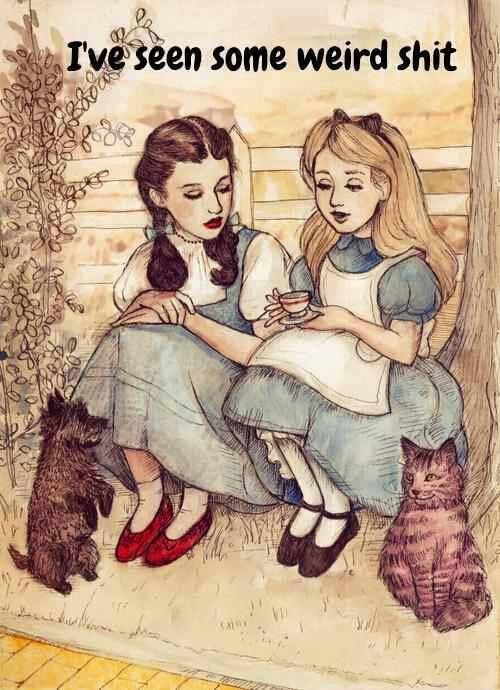 First off, a brief apology to my conservative friends who are pro-trans, or even trans themselves. But there’s no better way to summarize the movement and the folks who are behind a continued cavalcade of shenanigans direct squarely at LGB and especially transgender persons. In this case we are on the subject of same-sex marriage (SSM), which impacts nearly all transgender persons, more so since in many states it can be very difficult to determine exactly if one is or isn’t married (for example, in Kansas trans lesbians and trans gays can legally marry cisgender women and men, respectively.) But let’s not talk further about that, and take a cannonball into the crazy end of the pool.

First we have Utah, where the conservative anti-SSM contingent is acting as if all hell had broken loose. I mean what’s next, men taking multiple wives and keeping blacks out of church? The dear folks of Utah are so traumatized by the recent court ruling that their anti-SSM is discriminatory that the Republican Federal House of Representatives has decided that the dear folk of Utah must be protected from the 1,340 same-sex marriages which were performed in the state before said marriages were halted. The bill has absolutely no chance of being made a law, so it’s somewhat a waste of time.

Next we have Nevada, being sued in court over its anti-SSM laws, which has a Solicitor General making statements such as:

The state’s brief argued that the Nevada law defining marriage as between a man and woman “is legitimate, whether measured under equal protection or due process standards.”

“The interest of the state in defining marriage in this manner is motivated by the state’s desire to protect and perpetuate traditional marriage,” wrote Solicitor General C. Wayne Howle, who also argued that Nevada’s marriage laws are rooted in history predating statehood.

“Even before statehood, the 1861 territorial laws defined marriage as existing between ‘a male and a female,’” the document said. “The same limitation on marriage was codified in 1867 … and is substantially the same today.”

He added, “Nevada’s statutes evince a strong encouragement of marriage in its traditional form. These laws are not based on policy whimsy; they are grounded in policy as deeply rooted as any that exists in Nevada law.

That being said, the Nevada Attorney General has serious concerns about the viability of their law, after another recent landmark decision where the 9th US Circuit Court rules that gays and lesbians could not be excluded from jury selection based their sexual orientation. So Nevada at least may be getting ready to “grin and bear” SSM coming to their state.

Now we start to step beyond the looking glass, as an Oklahoma Republican lawmaker seriously proposes ending ALL marriages to avoid allowing SSM in their state. Can you all give me a big “WTF?” From the article:

Turner says it’s an attempt to keep same-sex marriage illegal in Oklahoma while satisfying the U.S. Constitution. Critics are calling it a political stunt while supporters say it’s what Oklahomans want.

While this is crazy, it’s also a political tactic which is called “scorched earth outrage”, and it goes like this.

Finally, we move from beyond the looking glass to right here in Kansas, which risks becoming crazy cuckoo land. A proposed bill, which has the tentative support of the Governor, would allow both private businesses AND government workers to REFUSE to provide service to people based on their religious beliefs. From the article:

The measure allows government employees to invoke the rule’s protections in providing a lawful service, though it says the agency must “promptly” provide another worker to do so “if it can be done without undue hardship on the employer.”

It really is just that crazy – you could wait in line at the DMV for an hour, get to the front of the line, and have the desk jockey say “sorry, Jesus says we need to kill the trannies, so I’m not serving you. In fact, this is a Christian DMV, so you can’t be served here. I think there’s someone in Garden City who might help you…it’s just 5 short hours away.”

What’s scary is I really can’t say how it would go. Knowing my fellow Kansans, if this measure was put to a public ballot I could see it easily gathering 60% or more of the popular vote. A somewhat large portion of Kansas is either rich people hiding from all the scary masses behind the walls of their gated communities in self-imposed apartheid – or else small-town folks brainwashed by their religious leaders into believing in an interpretation of the New Testament which is so surreal it belongs in a Fellini film.

1 thought on “January, 2014 -Beyond the Looking Glass with Same-Sex Marriage”