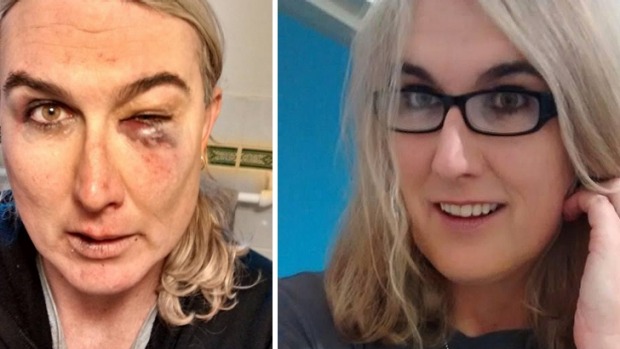 Elizabeth Andersen (a fellow hostess of “The Tenth Voice” on 90.1 KKFI) passed this news on to me: when transgender woman Stephanie McCarthy was beaten by two men in a case of anti-transgender violence, she lost the hearing in her left ear, has damaged eye sight in one eye, and has lost feeling in the top part of her face – in addition to suffering an untold emotional toll. Nonetheless, she stood brave and proud, and faced her assailants in court, where they were found guilty.

What she didn’t expect was to be victimized by the court system in Sydney, Australia, as the primary assailant was sentenced to 150 hours of community service and an 18-month good behavior bond. In short, pretty much no punishment. The other assailant remains to be sentenced, but will likely receive a lesser sentence. Even worse, McCarthy was not told of the sentencing date by the prosecutor or the court, and thus was denied her right to make a Victim Impact Statement.

“I asked the leading investigator (Detective Nick Kenny) when the sentencing date would be and he told me sometime early next year,” she said.

“I waited five months for that day in court and giving the Victim Impact Statement would’ve been important for me.

“And I think it would’ve made a difference in the sentence.”

The emotional toll of the assault has also been significant as the once outgoing punk rocker and trans woman feels her life will never be the same again.

“I’m well known in [Sydney’s] inner-west and most people are very nice,” she said.

“My life will never be the same.”