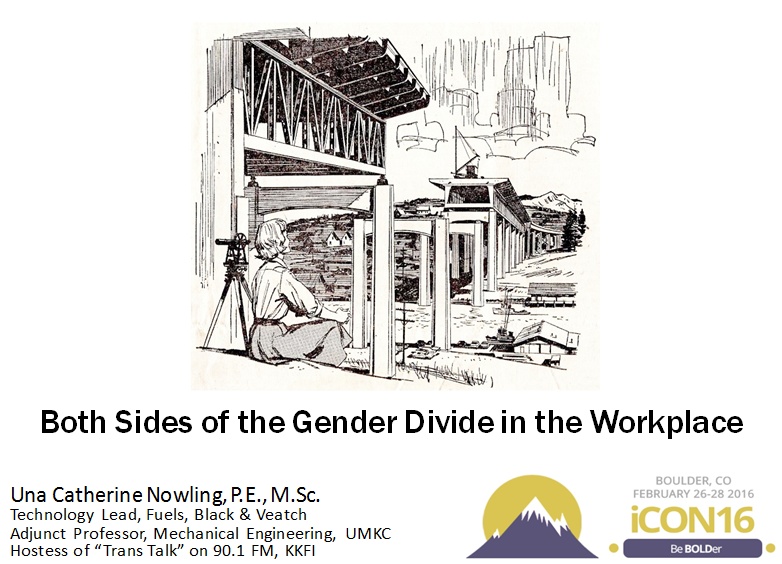 Tomorrow I shall be speaking on both gender and transgender issues in the workplace at iCON16, the regional Society of Women Engineer’s conference in Boulder, Colorado. This is my first professional presentation on gender/transgender subjects, and the audience will be composed mostly of women engineers, engineering managers, engineering interns, and students. For my topic I shall be comparing and contrasting the differences in the workplace as a “woman” versus a “man,” drawing on not only own experience but that of Ari Copeland, a transgender man who also works at my company.

If there are any readers in or near Boulder who would like to stop by and say hi while I’m at the conference this weekend, please let me know.

I have submitted an abstract to another conference to talk about this same issue, and I intend to post a version of the presentation on Transas City here after the conference.

Hello everyone! On Trans Talk this month the we’re going to be talking with two people in our studio. First we’ll speak with Dr. Hiten Soni, a psychiatrist who strongly supports the transgender community, especially regarding the subject of surgery. Next we will speak to Sieran, an intersex transgender person, about both his own personal journey and the challenges faced by intersex persons in general. And for this month’s show, my wife Fiona Nowling will be a guest co-host.

I will also give a breakdown of some of the LGBT news this week, and we will finish up the show with the community calendar update. I do hope you will be able to join me this Saturday, February 20 at 1:00 pm on 90.1 KKFI, Kansas City Community Radio! You can also stream the program live on kkfi.org. 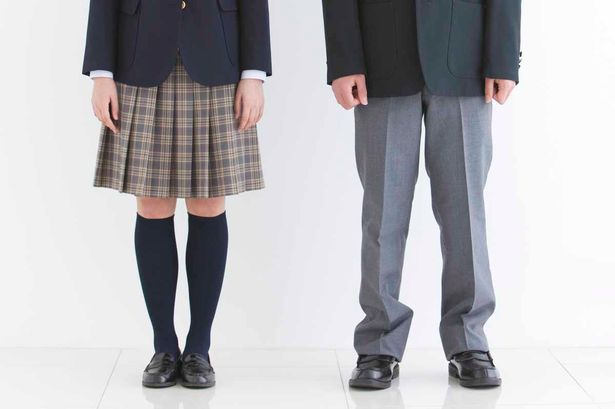 We have three items from the United Kingdom to highlight in this little news roundup. The first is from Brighton College, where the school is allowing all kids the right to wear the male or female school uniform, depending upon their gender identity. Note that although the school has “college” in its name, this is actually a pre-university private school. From the Daily Mirror:

Mr Cairns told students last week that uniform codes dating back to the school’s inception in 1845 would be replaced by a ‘trouser uniform’ and a ‘skirt uniform’ for all pupils up to the age of 16.

The trouser uniform will see pupils wear a full tweed blazer, tie and trousers and the skirt uniform requires students to wear a skirt, bolero jacket and open-neck reverse blouse.

Parents will be required to write to the school before pupils can switch from one uniform to another.

Girls are already walking around the campus in trousers and the school said more than one boy has expressed the desire to wear a skirt.

“What’s really surprised me is the way that people have taken it within the school.

“I think that it’ll be foreign for people to see someone who defines themselves as a male wearing a skirt, and I think that will be something big, but I don’t think it’ll cause any outrage or backlash because that person will be massively supported by the pupil body.” 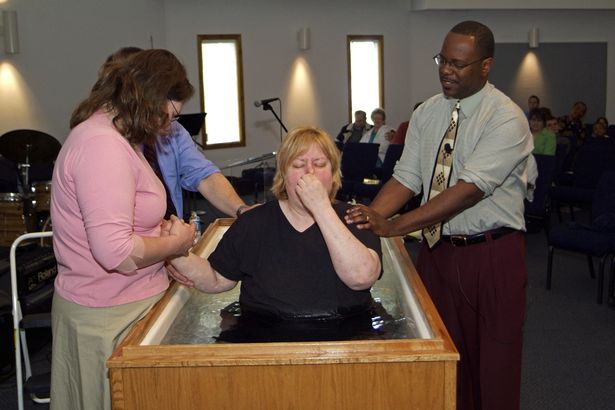 In another bit of news from the UK, a transgender girl has inspired the New Chapel Unitarian and Free Christian Church in Greater Manchester to start offering transgender baptisms. In short, to allow transgender persons to be baptized in their new name and gender expression.

Worship leader Jean Clements came up with the idea after meeting a couple who had a transgender child.

The church then backed the change to help others in the same situation.

Mrs Clements told the BBC : “I felt saddened by the fact that this family were being shunned by many mainstream churches.

“However, when the family came to New Chapel, the congregation welcomed them with open arms.” 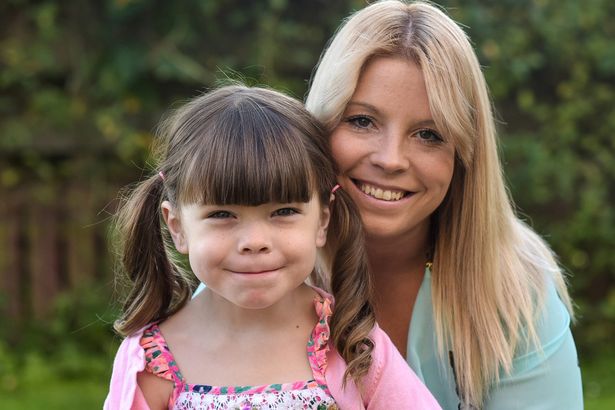 Finally, a 5-year-old Nottinghamshire child has become one of the youngest cases of gender transition in Britain. Little Danni McFayden has re-entered her primary school as a girl after a social gender transition fully supported by both parents and teachers.

Children can take drugs to postpone puberty as well as hormone treatment, before NHS gender realignment surgery at 18.

The Gender Identity Research and Education Society says referrals for treatment of young people are growing by 50%.

Colin Pettigrew, from Nottingham County Council, said it was determined to support the youngster’s wishes.

He said: “Transgender is a new area for many school and is a characteristic protected by law.” 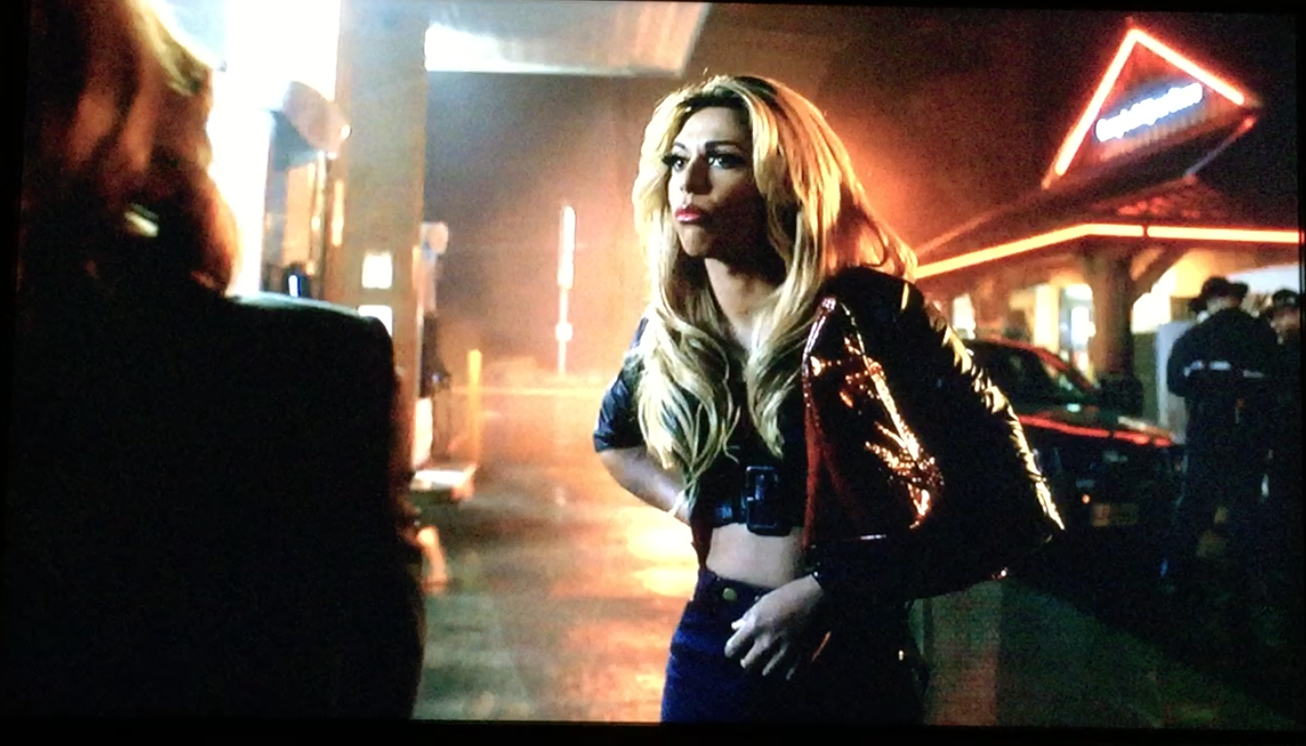